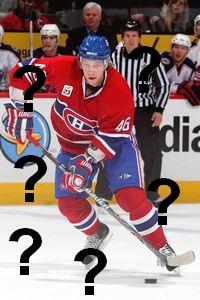 Yes, our Belarussian friend picked the right time to break out of his funk (he only had 3 goals since January 1st) but no, I’m not convinced we’ve got the old Andrei back (see 2007-08 Andrei for reference).

The talented but lethargic winger showed off a wide variety of his skills Saturday night in , but fans (and I’m guessing most of the coaching staff) have been scratching their heads as to why he can’t be a bit more consistent.

It’s not like he can’t hit or score impressive goals: he’s obviously extremely talented. A slick puck handler with great patience, Andrei seems to lack the drive to take his game to another level (like several players in recent memory). I’m hoping that he doesn’t need a change of scenery to trigger that desire to perform (see Guillaume Latendresse), and that a veteran player can find a  way to get a message across to him that he is needed, and badly.

Oddly enough his stats would indicate that he is becoming more involved in games as the years go by: he registered 102 body checks this year in 59 games (1.73 per game) as opposed to 124 in 74 (1.67) last year and 102 in 78 (1.31) the year before. His ice time actually increased this year (he played an average of 16 mins per game as opposed to 15:35 last year and 15:41 the year before). He’s received adequate power play time while playing with the team’s best players. Therefore, the tools for him to succeed are widely available and the entire organization has been extremely patient in regards to his development.

So, what’s wrong? Have the personal problems that plagued him and his younger brother re-surfaced? Or is Andrei just being Andrei, and we have to treat him as a crapshoot who could win a game for us whenever he feels like?

One thing’s for sure: the sniper who only has 6 multiple-goal games in the past 2 years needs to be more consistent if he wants to have a spot in ’s lineup next season. Just like his name and number suggest, AK-46 is a bullet short of emerging into the lethal Kalashnikov we all know he can become.