Share All sharing options for: Some Monday Morning Habs Links 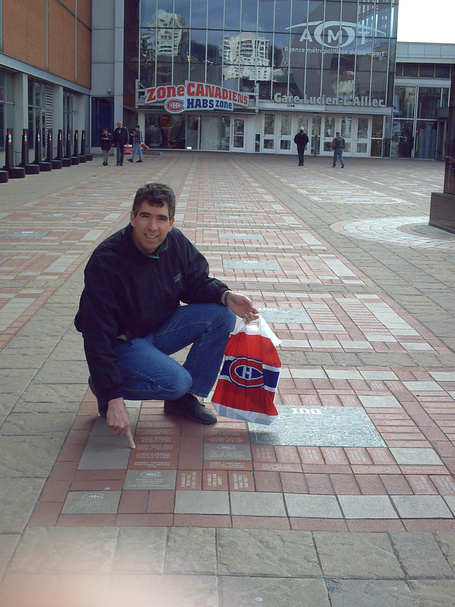 A six pack of links for you this morning, on a variety of subjects all near and dear to our hearts.

Kevin at Habs Rule! opens up the NHL officiating guide and takes a look inside the rulebook as it pertains to the 37 calls missed by refs in Saturdays game. He also takes out his icepick to unthaw the Habs' frozen coach.

I missed this two days ago, but Four Habs Fans has posted the funniest thing I've ever read on a hockey blog not written by a Maple Leafs fan. It's a scripted shrink session between Tony Soprano and Dr. Ruth, and wear a diaper when going through 'cause you'll piss yourself.

Greatest Hockey Legends looks at the Canadiens 1930 Stanley, their third, with, count 'em....one, two, three flashbacks. If that Cup and its tales wag your tail, here's more.

As this is the time of year hockey fans tend to visit rival NHL cities to take in games, I wanted to remind y'all of a great site created specifically for such a notion. It's called Stadium Journey, and it offers in depth reviews of arenas and venues for all major sports, as well as hotels, motels, and restaurants in the vicinity so you can plan a killer experience.I wrote the Bell and Palladium, Corel Center, Scotiabank Place reviews, so you can check them out and add your two cents concerning your trips experiences to those places, or any others you've attended.

Last Saturday I guested on Japers' Rink Radio, and you can check that out here.

Finally, the photo up above is of EOTP contributor Francis "Butch" Bouchard from a recent game at the Bell. Francis is pointing at his centennial brick that reads "Andrei Kostitsyn Hat Trick - April 17, 2010 - 1st Habs Playoff Hat Trick in a losing effort." Wonder how he knew?

Francis and I have scratched our collective noggins for some historical Habs / Caps content, and while we may be picking at some straws, we might just have come up with something completely and totally forgotten. As soon as we remember what it is.....

Japers' Rink does their usual linkapalooza, with just about every single link on the internet having to do with the Capitals / Canadiens series served up like a breakfast buffet all you can eat hockey talk. Hey, there's even a Team Varly and Team Theo forming. No shit!