Could Somebody Please Thaw Out Jacques Martin?

Share All sharing options for: Could Somebody Please Thaw Out Jacques Martin? 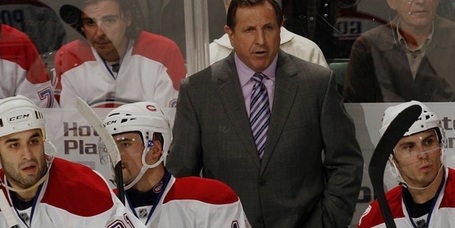 Admittedly I'll never be a big admirer of Canadiens coach Jaques Martin. You've read me here ad nauseum on what I find are his faults. I get that he's got merit, and instilled a system of play that has allowed the Canadiens to play two pretty strong games against the Capitals to return to Montreal with the series tied.

In last night's post game press conference, the question was brought up to Martin about the officiating, specifically that non call bump on Halak by Knuble that lead to the Capitals second goal.

Martin's response was beyond mundane, even. Not entirely surprising coming from him, he trotted out mantra like a talking Sphynx. It went something like:

Sorry, but that answer is to another question.

Maybe the questions directed at Martin need to in-your-face precise, in order to elicit the response people need to hear. Like how about:

"Jacques, did you question the official on ice after that non-call and what did he say?"

"Coach Martin, why did you choose to not react in whatever way at that time?"

"Were you considering calling a time-out at any point, and can you tell us exactly why you chose not to?"

I'll say this, the Montreal media are termed all kinds of shades, but the french media specifically protects their french coaches by almost deferring to them.

Martin's attributes as a hockey thinker suit him wonderfully if he were to be an assistant coach. He can preach, teach and enforce systems 24/7 with best of them.

Martin's failings on the other hand, remain the same. His in-game inabilities bite him everytime, the same mistakes being made over and over again.

Players are required to improve and correct mistakes. Can coaches not be held accountable to the same ideals?

A hockey team needs to feel that while games are going on, that their coach has their back. When something occurs on the ice that is contested, he must speak up occasion and allow his sentiments to be voiced and heard. When a coach chooses not to, or when a coach continuously chooses not to, he's let down his players.

A coach, and what he brings, are intrinsic to how a hockey game plays out. A player plays his shift, but coaches have the ability to control a huge mount of what happens during games, simply by their decisions.

Often, when a coach decides not to do something / anything, it also affects games.

Martin's inactions in gaining his team's collective back in this one, played into the reasons why they lost, (previous post at this site withstanding).

By not calling the referee over to a) bitch, complain and berate b) inquire about certain calls, or c) ask for specific clarification with a question or three, Martin lost a chance to show his boys that he was behind them.

It's a missed opportunity to back them when emotions are high.

The ragging the ref deal is also a great way to get some kind of time out without actually calling one.

Nonetheless, in this instance, the timeout was not needed until the third period. There it could have been called after the Capital's third or fourth goals, or better yet, after the Canadiens fifth.

Game Two of this series was a virtual rollercoaster of emotions. The Habs, often outplayed by the Capitals, required a moment to regroup. It never came.

I once heard hockey described as the "Frozen Stage", but for me now, it better describes Martin in third periods.