Capitals and Canadiens - Game One Goals Broken Down

Share All sharing options for: Capitals and Canadiens - Game One Goals Broken Down 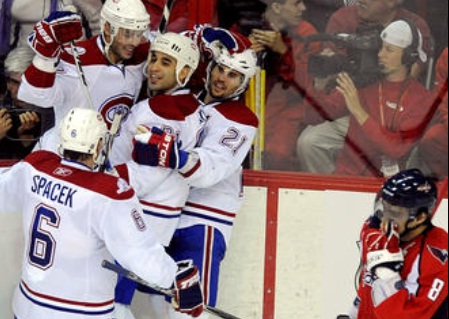 In a series that seemed at first glance to be a largely qualified mismatch, the Canadiens have taken a one game lead.

It's hardly the end of the world, mind you, but seeing as though the Habs earned five points against Washington in the regular season series, what Montreal have done well, and where the Capitals have slipped thus far after one game, is deserving of a more microscopic look.

Below, the five goals scored by both teams in Game One are given a going over. A key to understanding the good and bad from both sides is hitting the pause buttom on the vids. Watch each one a few times over, every detail is key.

Regardless of which side of the fence your allegiances lie, I hope this sheds some light on how mistakes translate into goals.

The Canadiens are on the power play. Poti gains the puck behind the Capitals net, but hesitates to clear. Plekanec neuters the attempt, and the puck dribbles to the right side board. Bergeron beats Steckel to it, and feeds Kostitsyn at the point. Cammalleri makes himself invisible, back to the right boards. A pass is made to Markov cross ice, he moves in and draws the attention of all four Capitals players. Cammalleri re-enters the play, and Markov finds him for a one-timer that beats Theodore. 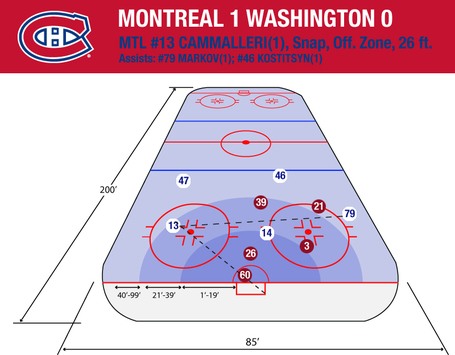 Spacek's behind the net clearing attempt bounces off a Capitals forward. The ricochet comes straight out from behind the Montreal net. Belanger passes up a stride to seize the puck, allowing it to reach Corvo at the blueline. With multiple bodies all in line with the Canadiens' goal, Corvo floats a high wrister that eludes a multi-screed Halak.

Blocked passing lane behind the net. Had gained positional advantage on four of five Canadien players. Put a simple shot on net, upon recognizing a screen.

Lame clearing attempt without looking. Too much concentration - four players - on a puck in a virtual dead zone. No pressure or shot block attempt at blueline. 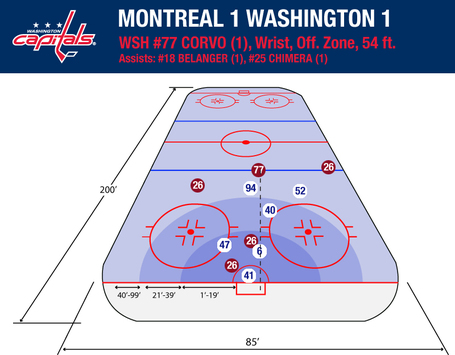 Kept puck possession despite being outmanned for seconds in the corner. Passes found open players. Were quick to loose pucks.

Too much concentration once again, on a puck in a harmless corner. Failed to sufficiently cover the most obvious passing lane to the point. Misread bounce and coverage. 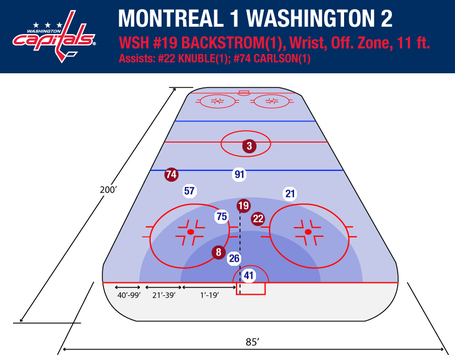 Gomez takes the puck behind the Canadiens' goal, skates freely through two Capital's defenders into the Washington blueline. As he draws four Washington defenders, he drops to Pouliot, who passes off to Gionta at the right boards and heads to the net. Gionta fires at the net, and Gomez reaps the reward.

Not much, other than Gomez recognizing soft coverage and slipping though. A pass to a wide open Gionta. Uncovered, Gomez skates to the crease. Gionta puts a shot / pass on goal.

Backstrom and Ovechkin were spectators as Gomez breezed by at the center ice line. Backstrom pursued Gomez, although he was covered by three defenders, leaving Gionta unchecked. 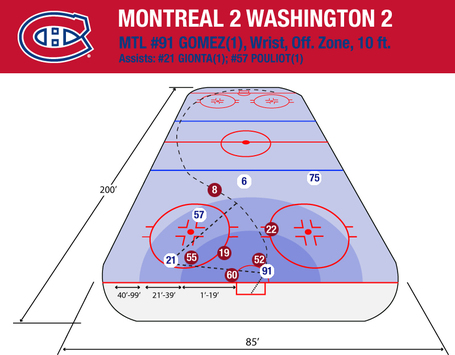 Corvo's up ice pass is deflected by Plekanec, never reaching its intended receiver. Spacek corrals a dribbling puck inside the Canadiens blue line, and taps a pass off the boards. Plekanec is more alert than Morrisonn, gains the puck, and enters the Washington blueline. He slaps at a puck on end, and Theodore has trouble tracking it.

Plekanec offered Corvo a passing lane, and then sought to eliminate it with his stick. By luck it was deflected, bouncing to Spacek, who made the simplest play, a pass off the boards to Plekanec. Using Cammalleri as a foil, Plekanec drilled a shot on goal from an unchallenged distance.

Corvo made a lenthy pass, soft through the neutral zone, instead of skating it out for a line change. Both Backstrom and Ovechkin, up close to Spacek, opted to go to the bench, ten feet and two strides from the puck. Not recognizing the mid ice breakdown, Morrisonn failed to challenge Plekanec as he entered the Capitals zone. 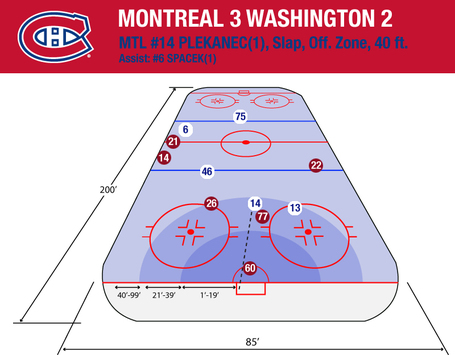 Not much to add up here once it has been simplified. The two Capitals goals resulted from forced and unforced bounces. With the Canadiens concentrating way too much coverage one way and the puck going the other, two subtle plays - an almost lobbed shot on goal, and a sleight off hand pass - caught them off guard.

The Canadiens goals resulted from three varieties of soft plays by Washington. A bad clear and losing track of Cammalleri on the first; watching Gomez stroll on the second, and abandonning the play on the third. Each faux required an instinctive aggression at a split second notice, and all three were blown.

Much thanks to EOTP contributor Chris Boyle, whose graphics inspired this article.