How To Piss Off A Leafs Fan Living In Ottawa

Share All sharing options for: How To Piss Off A Leafs Fan Living In Ottawa 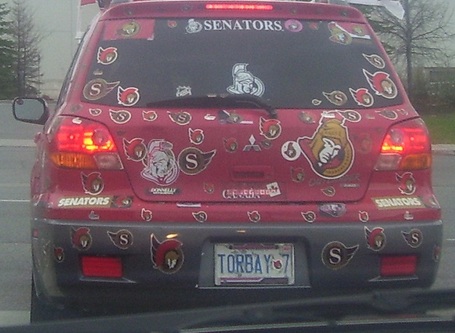 Back when I was a kid, relatively speaking, some friends and I played a cruel trick on a Maple Leafs fan. Long story short, it was the late seventies, and one friend's Dad was in the midst of getting himself dead drunk at a party.

The guy, about 50 years old, had this bushy beehive of a beard, a good six inches long. While he lay passed out on a couch, we dyed his beard blue blanc rouge.

A good sport, it took him a few days to figure out how to rinse away the colours. He nonetheless had to wear it to work, just days after a Habs Stanley Cup win.

I thought of all this when I saw this Mitsubishi in Ottawa last week, near KS on the Keys on Daze St. I looked at that car and thought, no Senators fan in there right mind would desecrate a good running vehicle this way - musta been the work of a Leafs fan!

I snapped these pics as the driver was pulling away, following his for a few miles down Hunt Club Rd. I needed to get a good look at him!