Share All sharing options for: Underdog Habs Take Game One In Overtime 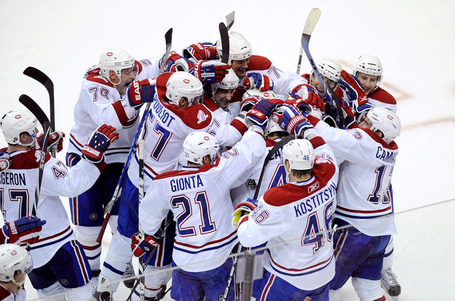 A quickie recap: the game story on this night was not an altogether unfamiliar script. The Canadiens scored first, on the power play, no less, and maintained the lead through the first period despite being heavily outshot. Montreal dominated the latter stages of the second, although the Capitals tied the game. Washington jumped into the lead early in the third, with Montreal equalling the score and sending it to overtime. The final act differed slightly on this occasion, as overtime was the real playoff deal for once, but as it has happened so often this season, the Habs decided when it was curtain time.

The 2009-10 playoff season could well be the year of the underdog. It's early, but as it is shaping up, this post season could play out as one that sees some longshot team upset a favorite or two along the way. As the Canadiens awaited the Capitals, of four games played on night one of the playoffs, the so called underdog won all four.

Such an against the odds clean sweep surely caught the Canadiens attention, and that cannot help but inspire when readying for a team that finished 33 points ahead in the standings.

When the book is closed this season on this current Canadiens team, history will note that they were often a conundrum camouflaged by a mystery and wrapped in a riddle.

They have the ability, on occasion, to slay the Goliaths of the NHL while outpastying the patsies at the bottom of the scum tank. The notion that they play to the level of their opponent is almost mantra. You and your buddies, with your girlfriend in nets would beat the Habs in a street hockey game.

So, in many parts, it was a good thing when the Canadiens drew the Capitals as a playoff opponent. I didn't cringe at the matchup.

Two teams who accentuate offense. The two best powerplays in the NHL. The Capitals weren't the Bruins, for a change, and the Habs did not draw the Devils, meaning I'll save a bundle on beanies.

Better yet, Montreal took five of a possible eight points against Washington. So did the Capitals, which might suggest the NHL is as mathematically challenged as Gary Bettman is vertically challenged.

So coming in, the Canadiens are already confident based on their regular season record against the Caps, and wins by underdogs in four games played a night earlier lends credence to the giant slaying dream.

A win over the Capitals in Game One, and that dream would be born. Time for that conundrum camouflaged by a mystery and wrapped in a riddle to rear it's pointed head once more.

And as sure as the Canadiens have lined up in circles all season, and paired up in groups of three, they again confound all common sense and beat the elite. 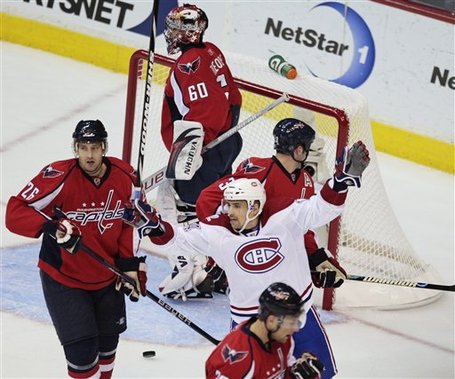 Pardon me for once again taking the coaching angle, but could it be that Capitals coach Bruce Boudreau has yet to figure out how the Habs have been getting the edge over his team this season?

It is never just one thing, it's a combination of several things, and judging by Boudreau's post game press conference, he smartly sought to highlight his own club's errors on goals at the top, then in later explanations, accentuate what the Canadiens did quite well.

There are mistakes, and then there are forced mistakes. The Capitals fell victim to both. On Tomas Plekanec's OT winner, Alex Ovechkin went off for a line change with the Caps facing an odd man rush. That type of boob would see a sophomore earn bench slivers.

To digress a bit on Ovechkin, has he ever played a worse game on a big stage? 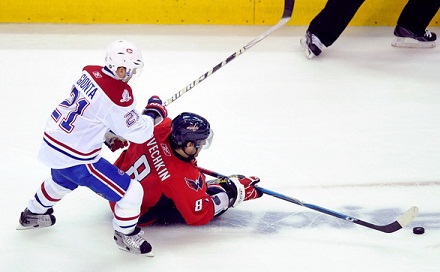 The Canadiens should not thump their chests in triumph at shutting down Ovechkin in this one. He in fact made it rather easy on Montreal to snuff him out. He fired wide at the Habs goal three times, with five blocked shots on his night's resume. A big story is that he had no shots on the Montreal goal, but I swear that if one looks closer, they will see a third period shot on net, tapped from about three inches from Halak's leg pad, fed from behind the net.

Ovechkin served up a Joe Thornton special in this one. He was uncommitted and uninvolved, rarely physical, and too often finding comfort in the perimeter. He was completely unlike himself and I lost count of how many times he fell to the ice, in battles or on his own.

Succinctly put, he was far from himself, and there has got to be a good reason. For that, the speculation is all yours.

Boudreau, owning the last line change at home, often got the matches he wanted, but in key moments during the game, the Canadiens lines centered by Dominic Moore and Maxim Lapierre turned the tables In top line matchups, the Habs boys were much more unit of five committed, which resulted in elongated stretches of puck possession time by Montreal.

Could it simply be that in a season in which Washington dominated the NHL, the Capitals haven't had a whole lot of practice in losing and correcting mistakes.

Earlier this week, former Avalanche and Thrashers coach Bob Hartley, described Boudreau's coaching philosophy this season as merely opening and closing the bench door. Hartley is a media puppet idiot at the best of times, but the gist of this note has merit in that Boudreau has little to complain of when the team is winning dominantly.

And that, in a nutshell, is why elite offensive teams are occasionally ripe for the taking. They are too cocky to submit to doing the little things that win games, perhaps too arrogant to think defense as a unit, and too individual to understand sacrifice in team terms.

Maybe Boudreau knows this, maybe he doesn't, but it seems clear from five games this season that Canadiens coach Jacques Martin has mandated his players to follow a strict regimen when working against the Capitals. The dictum is to outwork and tire the Capitals, and force them into choices that lead to mistakes. So far, so good.

From the Canadiens angle, a win such as last night can be nothing but a group effort. Without the last line change, Martin rarely was able to mix and match, and by all accounts prepared his players for all eventualities.

The Moore trio did great work against the Caps second line. The Josh Gorges / Hal Gill defensive pairing were no less intimidating to Ovechkin and company that the Habs best pairing.

Leading scorer, and soon to be UFA commanding big bucks, Tomas Plekanec came through in OT.

If Andrei Markov were to be anymore in Ovechkin's face, he'd be his dentist.

Jaroslav Halak, played his best and most important game of the year.

If this trend continues and an unsung hero or two were to emerge for the Canadiens, the prognostivators will be stumped.

Upon being asked by someone the other, on how the Habs would do, my answer was simple.

Depends which Canadiens team shows up.

Book this one for another night.

For more on the game