Share All sharing options for: Is Alexander Ovechkin the Rocket Richard Reincarnate? 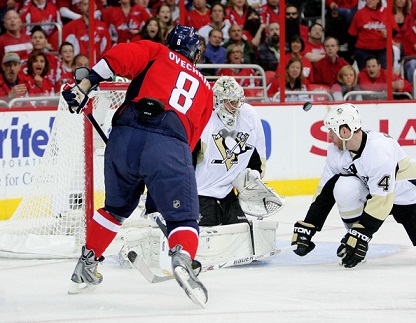 Since bursting upon the NHL scene some five seasons ago, Alex Ovechkin has reserved to himself a set of superlatives assigned exclusively as befits the game's most tantalizing and explosive talent.

Of the many compliments tagged to Ovechkin's growing legend is the eyebrow raiser than he is the closest incarnation of the iconic Maurice "Rocket" Richard that the game of hockey has seen in 50 years.

That's quite a statement, especially when one considers that to have seen the entirely of Richard's body of work, the witness today would likely have to be aged somewhere between seventy-five and eighty years old. Tales of the Rocket exploits are ageless, fables passed down from generations.

In accordance to that notion, this witness did see Richard live only once, officiating for a barnstorming tour of oldtimers. There are, of course, the tales passed from father to son. Apart from that, game films, highlight reels, inspired recreations, and tons of photos and books have been the education on the Rocket in these parts

Much has changed in the game during that fifty year span, and it makes those "who's better, who's best" questions impractical to answer. Consider only that players are in better shape from training with improved methods working them much harder and all year long, and that all equipement of the game from rink surfaces to skate technology to upper body and helmet protection, allows players to perform at levels so much higher physically that the players in bygone eras have been eclipsed in every category by miles, except perhaps in heart.

Such renders comparisons by era ludicrous. Today's Toronto Maple Leafs, if they were to find Marty McFly's DeLorean. could time travel backwards fifty years, and pound the 1960 Montreal Canadiens into submission. 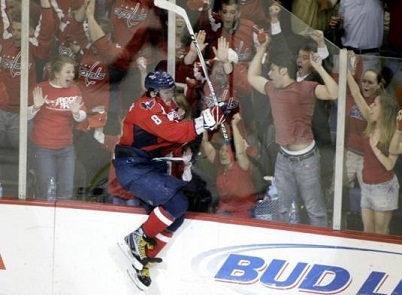 So, there can never be a "who's better or best" between the Rocket and Ovechkin.

But are the two alike?

It is agreed that both Richard and Ovechkin are explosive from the blueline to the net in their unique and preternatural ways. Both players own an unquenchable zest for the net, their mandate in life seemingly to be natural born goal scorers with no peer.

In that shared desire, both Ovechkin and Richard plowed and plied their way to goaltenders, often bulldozing right through defenders as though each were mere gusts of mist. Both players also had the uncanny sense of knowing exactly where the goal is situated, from any and all impractical angles. Like a sixth sense that smelled mesh, one is left wondering whether the two could have hit the net blindfolded.

For Ovechkin, it is the head of steam he builds that backs opponents a step, while in Richard's case, the almost lunatic gleam in his steely eyes usually managed the trick. Both attack opposing goals with robotic simplemindedness that is far from the norm of mere mortals. The eras may differ greatly, but in Richard and Ovechkin, the singulary focused mental armament remains the same.

In comparing the two, what is truly interesting to note as well are the stark contrasts to keep the players and personas unique. 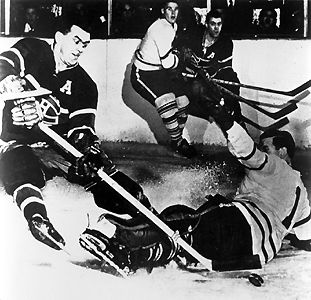 Ovechkin celebrates every goal like a vagrant that has just won the lottery. Richard, was often just as sullen after a goal as before it, knowing the job was far from complete.

In the Rocket's attack, there was the unmistakable look of contemptuous disgust in his eyes for anyone daring to get in his way. On Ovechkin's shielded face, is an almost eager grin, that of a confident warrior coming in for the kill.

Away from the ice, Ovechkin borders on boastful, in an entertaining, but never seriously arrogant way. He's a treat, a marketers dream.

Richard was disarmingly humble, almost shy, and a task to get from him a quote on himself.

Curiously, both struggle with a command of the english language, with Richard never being the most voluble in his mother tongue to begin with.

In the lore of legends, and those in the making, it is often the achievements that can be wrapped in myth, that end up canonising what they were all about. 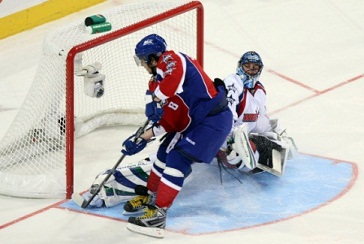 Both Richard and Ovechkin have scored them by the bucketful, dazzling beauties worthy of works of art. In each player's gallery of greatness, there stands a piece de resistance, a creme de la creme moment that witnesses will pass down to children and grandchildren for generations to come.

For Ovechkin, that goal came in his rookie season, and five years beyond, it is still almost impossible to accurately describe its details. It came on January 16, 2006 against the Coyotes in Phoenix. 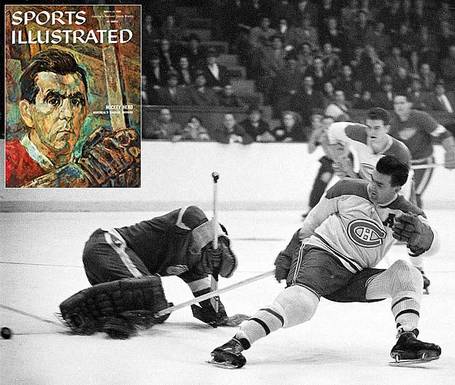 On the ultimate of no quit plays, Ovechkin stole the puck at center ice and burst in from the blueline right cutting cross ice into the crease area. There, as he attempted a move on defender Paul Mara, sticks and legs quickly tangled up. As Mara shoved Ovechkin with a push at the shoulders, the puck redirected off the Coyote player's skate, never eluding the Capital's gaze. Ovechkin regained possession of the puck slightly, on the backhand, with his back to Phoenix goalie Brian Boucher. Freeze frame imagery clearly shows Ovechkin never once taking his eyes off the puck. As he falls, he spins onto his back, legs into the air. The crook of his stick curve cradles the puck for a fraction of a second, as he rolls completely over on the full of his spine. His arms stretch, then pulls the puck, as his elbows flex and rise above his head. Ovechkin is sliding at breaking speed, yet he manages a last ditch hooking of the puck at a near impossible angle, releasing it with one hand on the shaft, past a startled Boucher, who had entirely quit on the play. 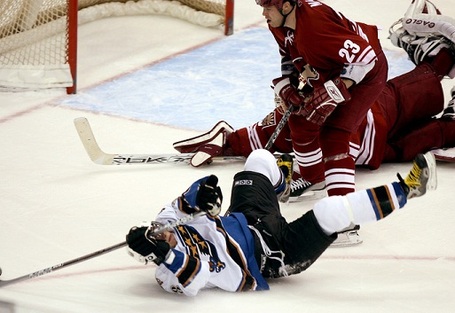 The entire effort is one of extreme composure. Even the spill had swagger. The intense focus on the puck by Ovechkin gave the impression that had the ice melted to water, he would still have scored submerged beneath it. Like all great goals, it has withstood time's test as one otherworldly marker. It's a statement of cool that screams "top this!

Maurice Richard's masterstroke came under entirely different circumstances. Hence, it was for that reason mainly, in addition to the play itself, that the goal, unseen by most prior to the television era, has remained in Rocket lore for decades.

It was on April 8, 1952, and the Canadiens were about to head to overtime of the seventh game in a series against the Bruins. Earlier in the game, Richard had suffered a concussion on a vicious hit from Leo Labine, and spent a long while in the trainers room recovering a sense or two. He had been cut over the left eye with a nasty gash that refused to stop bleeding. The Canadiens trainer avowed that the Rocket had little recollection of what had happened earlier, being vague and unresponsive to many questions asked of him.

Some time later, as overtime neared, Richard groggily made his way back to the Montreal bench. Coach Dick Irvin was surprised to see him return, and asked if he could play. Richard gave no response at first. Further queries were greeted by incoherent mumbles that he was "alright", but Irvin stated that the Rocket could not even remember the game's score.

Richard had watched teammates lines spill over the boards for several shifts, making no attempt to join them. Once Irvin had surmised that Rocket was likely only sitting with the team to watch the action, his player, without warning, leapt over the boards and into the play. Only a few minutes remained in regulation, when Richard accepted a pass mid ice, curtailed the Bruins' Real Chevrefils at the Boston line, and drove for the net with Bill Quackenbush riding all over him for several strides. As Rocket approached the net, he rid himself of the Bruin defender with a swing of his shoulder and elbow, reached for the puck with his arm, bringing it back into his grasp. He fired a close in wrister past goalie Sugar Jim Henry, bowling him over in the motion that it took. Fans in the Forum were awestruck.

Richard returned to the bench, still dizzy by his own admittance. To some, he seemed detached and unaware of what he'd just done. Within a minute, the Canadiens Billy Reay scored an empty netter to seal the game at 3-1. A photo of Richard, his patched up brow bleeding severely, extending his hand to Henry, sealed the historic goal and the incredible moment for posterity.

Back in the dressing, while teammates anarchically revelled in sweet victory, Richard himself sat aside, glassy look still visible. With no warning, Richard broke down, and bawled his eyes out. A team trainer, further examining the Rocket with tests and questions, deduced that Richard had yet to regain full consciousness.

Unbelievable! Not only was Richard capable in his career of scoring the most dazzling and timely goals possible, it could now be claimed for him that he could work his magic android-like, half his wits about him. 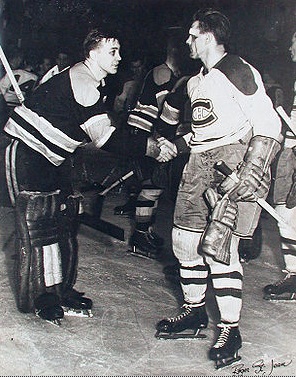 Only the test time can truly decide whether Ovechkin is a Rocket clone. Doubtless that he is well on his way, the true legacy of the Rocket is far from being equalled.

Similar plays and mere carbon copies of Rocket - like displays are but one dimension. The true measure of the Rocket is in the number killer playoff goals, specifically the overtime form of backbreaker that was Richard's mastery.

It's no knock on Ovechkin, early into his career, to suggest that the playoff realm wherein Richard raised his game has yet to be matched by him.

However, it is keenly within his sights 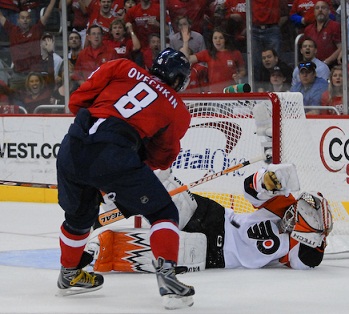 For the time being, there is little doubt that Alexander Ovechkin really is the Rocket reincarnate. No matter how distinct from one another they are as personalities, it cannot be denied that they two legendary goal scorers who stand apart.

Richard and Ovechkin, much beyond the merely instinctive and mortal purebred scorers, would never have considered goal scoring their simple duty, a role or job on their respective teams, or what it is they are paid for.

In Ovechkin and Richard's eyes, goal scoring was nothing less than a mission.

Photos of the Rocket versus the Bruins were taken by Rene St. Jean. Articles featured below are from the Montreal Gazette, April 9 and 10, 1952 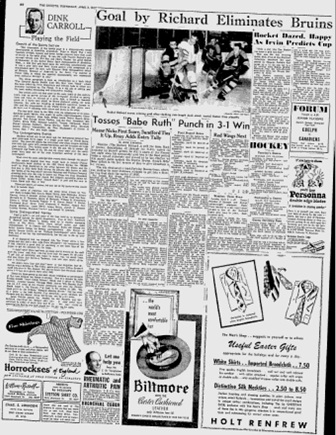 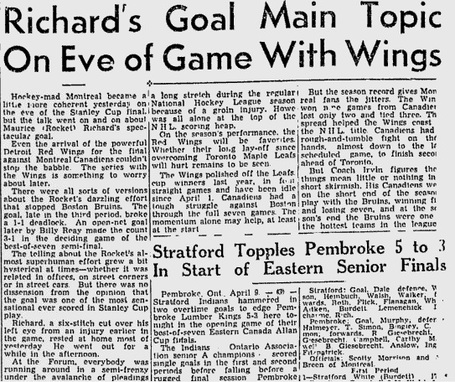 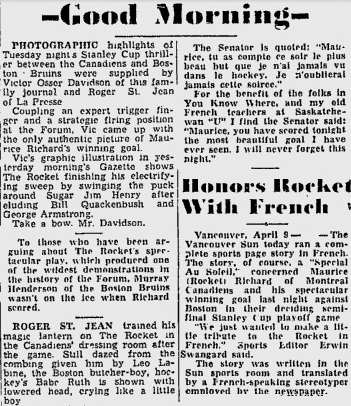