It's Official - Canadiens to Face Capitals In First Round Series

Share All sharing options for: It's Official - Canadiens to Face Capitals In First Round Series 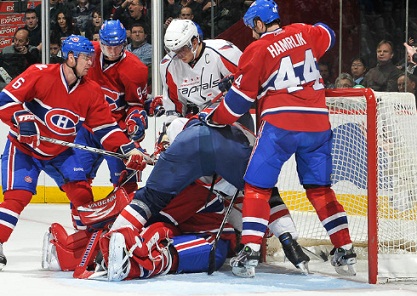 With the Philadelphia Flyers 2-1 win over the New York Rangers this afternoon, the Canadiens first round matchup is now set in stone. They will be in Washington on Thursday to play the Capitals in a seven game set that pits the NHL's leading club against the Eastern Conference's eighth seed.

It's safe to say that Montreal may not have drawn its prefered foe of three possible scenarios today, but it is very interesting to note that the Canadiens have fared well against the Capitals, being one of a few teams to actually win (technically) its season series against the NHL's beasts.

What follows, is a recap and statistical breakdown, with some notes and analysis, looking back on the four games involving the two teams this season.

Montreal and Washington, in four meetings, each scored 14 goals, discounting Washington's shoutout winner. The scores were as follows. Click the links to tale a closer look at individual games from the Canadiens official site.

For Montreal, there were 10 different goal scorers, with 21 players participating in the goals. That is quite well spread out. For the Capitals, less balance across the lineup, with eight goal scorers doing the damage, and five others contributing assists.

On November 28, the Capitals won 4-3 over Montreal in a shootout, with Niklas Backstrom netting the winner.

On January 5 the Capitals defeated Montreal 4-2, the only game of the four not decided by a one goal margin.

On February 10, the Canadiens and Capitals played the most wide open game of the four, with the Canadiens winning 6-5 in overtime.

In terms of goaltending, here are the stats for Jaroslav Halak and Carey Price against Washington for this season, and in their careers.

Against Montreal, the Capitals have used three goaltenders this season, including Jose Theodore and Simyon Varlamov once, and  Michal Neuvirth twice. 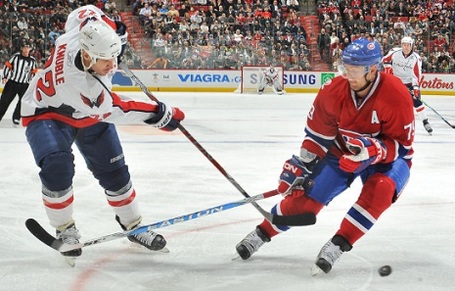 Among the many obvious stats and facts that differentiate the clubs, it is curious to note that the Capitals surrendered 10 goals more (233 to 223) than the Canadiens over 82 games, while scoring 101 more. Clearly, the Caps could be the 1977 Habs incarnate. 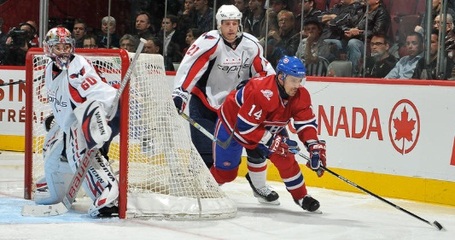 Washington have a 50 goal scorer (Ovechkin), a 40 goal man (Semin), a 30 goal scorer (Backstrom) and four players having hit for a least 20 (Laich, Knuble, Fleishman and Fehr). Additionally, their top defensemen Mike Green has counted 19 goals. Four Capitals players have in excess of 70 points. 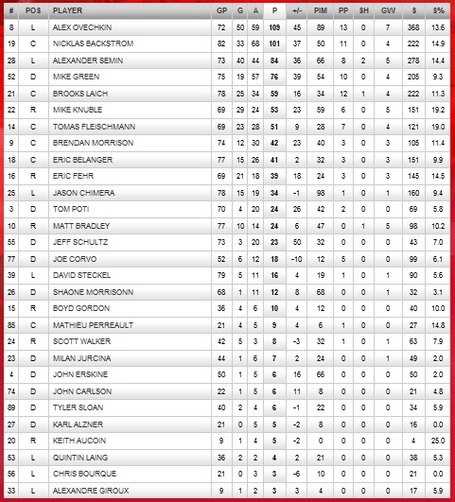 The Canadiens for their part, seems a desperate mismatch, with only three 25 goal scorers in Gionta, Cammalleri and Plekanec. Next are Pouliot, Metropolit and Andrei Kostitsyn with 17, 16 and 15 respectively. Plekanec is their lone 70 point player, while defenseman Markov, injured half the season, normally posts near to Green's number. Bergeron on the blueline, numbered 13 goals in 60 games with Montreal. 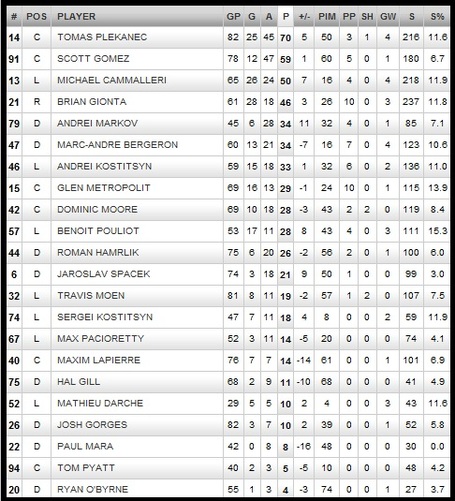 Perhaps it will be in the smaller details that such a first glance mismatch could play out. Stay tuned to this posting for some later updates. 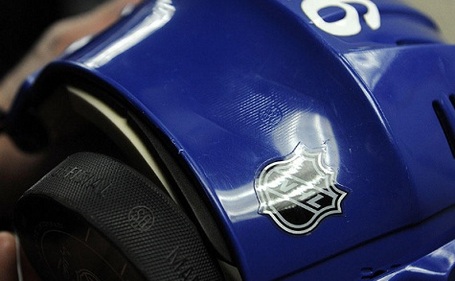