Habs Wrap Up Season Similar To All That It Has Been

Share All sharing options for: Habs Wrap Up Season Similar To All That It Has Been 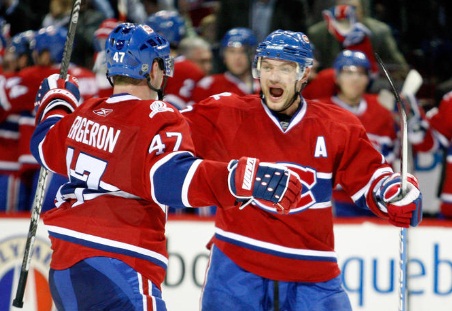 Well the Habs regular season came to quite the finale, did it not?

I mean everything was so back door, they should hire Stephane Richer as mascot.

I can't speak for anyone but myself, but as the clock ticked down to zero in this game, my relief overwhelmed any jubilation I felt.

The Canadiens play in final ten game stretch (3-5-2) has tested just about everyone's patience, and squeezing out a point in an overtime loss to the Leafs is just about par for the course.

Gaining what they barely needed against the sad sack Leafs is but small consolation. 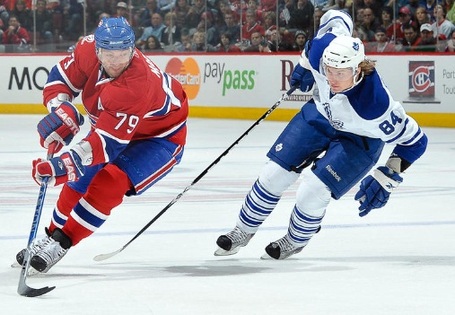 More worrisome is the brief interview with Jacques Martin by RDS' Renaud Lavoie immediately after the game, in which the smilling coach underlined how pleased he was with the team's play since the Olympic break.

Now admittedly, theyve had some good games in that time, but if recent performances satisfy Martin the Habs can book their tee time for a week from next Thursday.

In a seasons where the good was mixed in with a whole lot of dismal, the Canadiens played a game equal to their reputation. As several players lead with strong performance, others went awol. 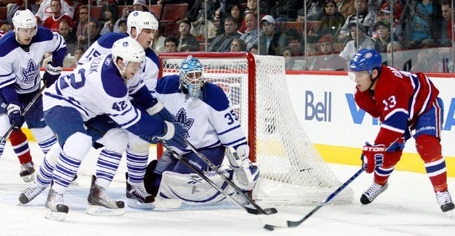 Propelled by the efficient breakout plays of Andrei Markov and Marc - Andre Bergeron, the Canadiens played most of this game in the Toronto end, and were it not for Jean - Sebastien Giguere and his excellent goalposts the Habs would have cruised to what may have resembled a solid.

On the not so good side of things, Roman Hamrlik is ageing faster than an arthritic moose, and it seems that in every game he's being beaten in embarrassing fashion. Often, partner Jaroslav Spacek goes down with him. Together the two are having a terrible time keeping things simple.

In the category of one good thing for one bad, we have Benoit Pouliot versus Andrei Kostitsyn. AK brought his ozone game and found bench with it, as Pouliot played his best in weeks, surely helped and inspired by Gomez's performance. 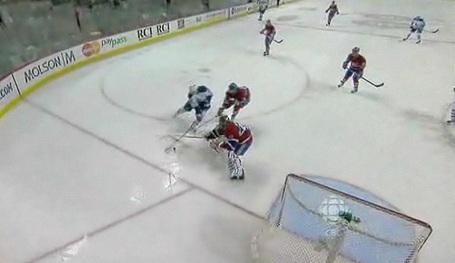 It is often said that if the Canadiens are to pull off a playoff surprise of any sort, it will happen via stellar goaltending from Jaroslav Halak. But there seems to be domino effect regarding his performances, based on the Habs inability to have wrapped up playoff seed games ago.

It can clearly be seen that Jaro is tired, easily unfocused, and could have benefitted from having Carey Price sub for a couple of games. Unfortunately, the delay in clinching never allowed Halak a moment's rest. He was to blame for Hanson's first goal, and appeared unsteady on two more. Hopefully, his stamina will be replenished with only non game day work until Thursday. 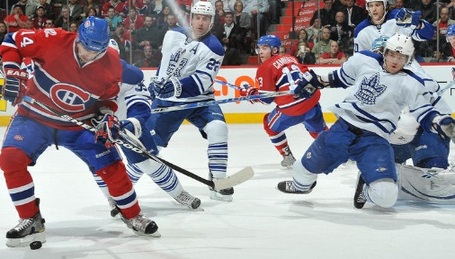 Jacques Martin has been doing a tonne more in game coaching the past two games, more than has been seen in a while. His adjustment of subbing Mathieu Darche on the Plekanec line was a key move a crucial time. The line then strung together several strong shifts, when the Canadiens desperately needed to keep the puck in Toronto's end.

Not sure I liked Martin's post game comment thought. Scary to think that simply putting forth a better effort (and not by all that much!) is good enough in his books.

The Habs have been woefully out of joint against a round of bottom feeders of late. I'm not sure it is a case of them playing to their opponents level anymore. I think it more a statement on their inability to find that needed killer instinct when they require it best.

So now, it can be said (imagined?) that the Habs have a clean slate for half a week, until the real season begins.

You all remember the real season, don't you?

That's the one that tends to last all of a week in recent years around these parts.

I've been wrong before. I'll be cheering for me to be wrong again!

I'll never love the player, but Scott Gomez brought it last night, playing the type of creative hockey one expects from him. Then again, maybe Gomez would win the Art Ross if he played 82 games against plecostomuses like the Leafs. Linemate Brian Gionta was killer as well, but then it's a story when Gionta isn't on.