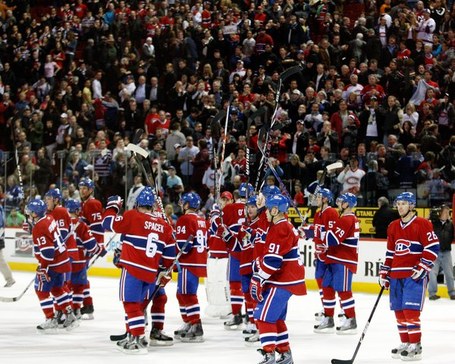 Better late than never it is said, but the Montreal Canadiens are in the playoffs for the fifth time in six seasons. Who they are to meet in the first round remains to be decided tomorrow. They finish the 2009-10 campaign with 88 points.

The Canadiens got goals from Andrei Markov, Brian Gionta and Marc-Andre Bergeron and were leading the Maple Leafs by a 3-2 score when Toronto's Christian Hanson tied the game in the third period. The Canadiens hung on to bring it to overtime, where the eventual loss to the Leafs played out in mere formality.

As it stands, with games to be played tomorrow, the Habs could face either of the Capitals, Devils, Penguins or Sabres in the first round.

Article and game summary to follow here sometime later tonight. In the interim, feel free to add you comments. Meanwhile, enjoy this Dominic Moore highlight from his Maple Leafs days.