Costly Mistakes, A Stellar Ward, Do In Habs

Share All sharing options for: Costly Mistakes, A Stellar Ward, Do In Habs 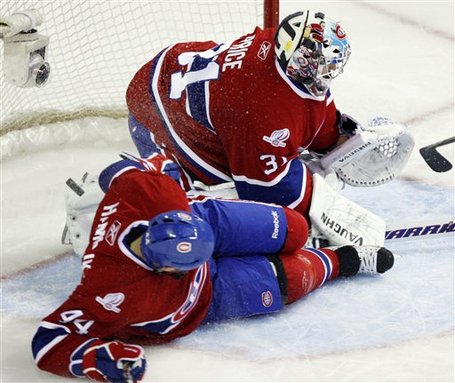 This is depressing folks...

The Carolina Hurricanes record is not indicative of the team that they are. Coming into the game with only five losses less than the Canadiens, the Hurricanes, who were dwellers in the NHL cellar for half the season, presented a misleading foe for the Habs.

A solid enough team Carolina is, they were not to be taken lightly on any count, but were the Canadiens truly prepared to face such a proud team, who looked themselves to be the ones in a fight for playoff survival?

On appearances, the Canadiens took the challenge quite seriously, as they came out guns just a-blazin' in the first period, outshooting the Canes 12-2 and going up by one on a power play goal by Marc-Andre Bergeron. It was 1-1 after two periods with the shots being 25-10 in Montreal's favour.

So what the hell happened?

Cam Ward, for starters, stole this game. The Canadiens had glorious chances in the first 40 to take and pad their lead, and were stymied time and again by the Canes stopper. Carey Price, and the opposite, was a game saver himself many times over. Neither of Carolina's goals were attributable to him.

On the first Carolina goal, Roman Hamrlik dove to strip Brandon Sutter of the puck, and in his shute pushed it past a bowled over Price.

"Like, thanks for the hand, man. Just let me stop in next time!"

On the second, Eric Staal was left uncovered at the side of the Canadiens goal, and tapped a rebound past Price.

On both goals, the coverage was badly blown. More on that in a bit.

Now do you find the Canadiens fragile in psyche at times, in games like this where something is on the line?

Where exactly did all that dominance go come the third period?

By all appearances, the Staal goal sapped the Habs, set them on their heels. From then on, Carolina took charge and the Canadiens never recovered.

What happens to make the confidence displayed earlier, just dissolve into thin air?

When the Habs were on the attack for two periods, I found them to be squeezing their sticks quite a bit, firing prematurely, opting for bad angles over patience. They were getting chances by the bunches, but often squandered them through over-anxiousness.

The trouble is, and it is part of what confounds the Canadiens in the bigger picture, is that the shot count is practically irrelevant in whole, as it is shot quality that matters most. Montreal hit net 35 times, but had 33 others blocked or fired wide. By now, we all can see what size up front and perimeter play have to do with this.

And the stinker is that it just doesn't go away. Each of the top lines needs to add grit elements in games. On precise shifts, would it not be a damned good idea once in a while to send out Lapierre, Moen, Darche to create some well planned crease havoc when the opponent is backed in. It just might create shooter space or an added passing lane. 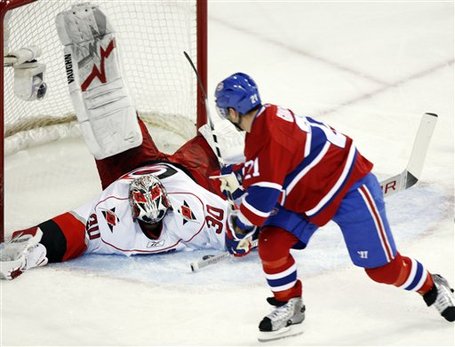 Nonetheless, in this game, getting so many chances is awesome, and players generally believe fully that they will cash in sooner or later. Only this time it didn't pay off. For two periods, the Canadiens players shook their heads. Ward saw most of what was directed his way.

When Staal scored the go ahead goal, it was a stunner, a shock to the system. You could see the air being sucked out of the balloon. As the goal energized the Canes, it demoralized the Habs, and that lost step was not recovered.

How did the Canadiens get behind the eight ball in a game they had control of?

Two pivotal mistakes, leading to the Canes goals defined this game, and robbed the Canadiens of the opportunity they had to gain two precious points.

On the Sutter goal, Hamrlik totally screwed up. He had a step on the Carolina forward at mid ice, maintained it to the blue line, missed his one good shot at playing the body, and Sutter burst around him. In the entire play, he looked caught off guard, as though he was expecting another play to develop and was surprised by Sutter's speed.

In desperation, Hamrlik lunged for the puck after Sutter had blasted by him. It was a mirror play of the one that lead to Chris Lee's ghost tripping call in the Jersey game. As Hamrlik sprawled, his body took out Price and his leg seemed to sweep the puck into the net.

Now twice in two games? I'd expect a veteran defenseman to be a whole lot more focused on what is coming at him.

On the Staal goal, the Canadiens had just killed off a two minute minor to Cammalleri when the puck entered the Canadiens zone. A few plays toward the net were made, and the Canes Ray Whitney grabbed a loose puck behind the Habs' net and headed straight for the right side boards.

Ryan O' Byrne was blamed and sat for blowing coverage on Staal, who had come from out of the right corner to the net somewhat unobserved. O' Byrne's attention was on the play developing at the point. He had come over from his left defense position to play the middle, as it was his partner Markov who tailed Whitney up the boards, leaving him one on one with Staal. O' Byrne never had Staal in his sights, he'd just gotten there, to the spot vacated by Markov, when the point shot went by him and bounced to the Canes centerman.

The entire mess was a unit of five breakdown. Carolina had managed to get their top line of Stall, Whitney and Cole out against Cammalleri (just out of the box), Lapierre and Moen. Markov broke rank by pursuing Whitney into an area of coverage that was already accounted for by Cammalleri and Moen. The play looked like schoolyard kids chasing a gum wrapper in the swirling wind.

Oddly, O'Byrne was the one player in position on the play, but he was late in reacting to Staal coming out from the corner. As it happened, Cammalleri enterd the ice onto his off wing.

Bummer, ain't it not. But how did the Canes get their top line out there immediately after their powerplay had expired? The Canadiens had a bad match up go out of position.

On both goals, veteran defenseman were burned.

Hard to say if this game was lost in the first when Montreal failed to add a second crucial goal, or when they capitulated in the third, when their foes sprung prongs.

This one hurts big time, and the Canadiens desperately need to win on Friday, if for nothing more than their seeping confidence.