Canadiens Hang On To Beat Kings

Share All sharing options for: Canadiens Hang On To Beat Kings 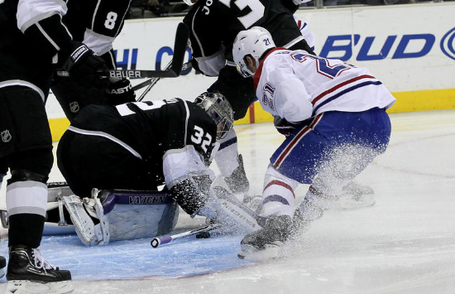 What began in San Jose continued in Los Angeles to a certain extent. The Canadiens were up against a physical club ready to make them pay for every inch of ice. Win or lose, hard hitting, fast skating teams bring out the best in the Habs. With a playoff spot on the line, they should be welcoming such challenges, as it will season them perfectly for what is to come in the final 16 games, and hopefully beyond.

When suggesting that an equal mindset continued on to L.A., it should be noted that the Canadiens were in command of the Sharks contest two nights earlier, for large chunks of the game, carrying the lead until the dying minutes.

Against the Kings, a similar scenario looked to be playing out.

Early in the game, the Canadiens were so hungry in their puck pursuit, it looked as though they were gunning with a two man forecheck. That is hardly their usual approach. It's smart use of team speed if you ask me, and my preferred way of taking on a heady foe. On the road, a team must acclimate itself to a rival, as it is difficult to enforce one's system against a team that owns the last line change.

In other words, it's no time to be a fox in the den of lions.

On that note, the Habs would have been red meat in both games had they not scored the first goal, which they accomplished both times. Considering that the Canadiens are not only on the road, but in a western California swing, out of their time zone, after an Olympic layoff, and facing two of the top six teams in the NHL without their leading goal scorer, it should be underlined that this club's desire to win is unquestionable.

Scoring in the first minute of the game in L.A. is testament to that notion.

Now the similarities in both games played on until late in the Kings contest, and I wouldn't dare suggest that it was the Habs who made the difference. Just like the game before, they hung on for dear life as the game wound down. The Kings, after a certain time, were all over Montreal, just as the Sharks were two nights earlier. The Habs gave it all they had, but the difference maker might have been that the Kings just don't have the offensive thrust, potency and accuracy that the Sharks own.

After the Canadiens had made it a 3-1 game, seconds into the third, they laid back, and although it was said on RDS that the Kings went ten minutes without a shot, the Canadiens allowed their adversaries to tilt the rink their way.

It was inevitable then, given the Kings assets, that they would reduce the margin, which they did six minutes later. Michael Handzus duplicated Anze Kopitar's earlier goal, by muscling straight into the Canadiens crease practically unchallenged, before feeding off to Fredrik Modin, to make it 3-2.

Scary, that on both Kings goals, players were allowed to walk right in. 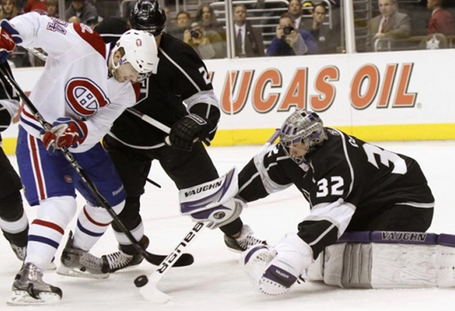 At this point in the game, don't you wish that Jacques Martin would call a timeout at the appropriate time one of these days?

Maybe you're like me, cause all I'm thinking here is "settle the troops, calm the nerves", but "no", good ol' placid Jacques lets it go, and I'm shittin' thinkin' that "lose this game, and the playoffs are toast."

When it was all said and done, maybe Martin understood that he was coaching against the equally easily unnerved Terry Murray, who yanked goalie Jonathan Quick without the benefit of Kings puck possession in the Habs' end. Quick sat on pine for all of 19 seconds before the Canadiens were lured like a magnet to the Kings' open net.

When it comes to playing with the lead against strongs clubs, how is it that the Habs can practice this? It just don't happen often enough.

Some thinkings thought by me during this game

I do not see a tiring Tomas Plekanec at all, as many do. What I see are teams league wide being more aware of what Plekanec can do, and hence paying more attention to him.

Plekanec is not a 30 goal scorer. Never will be. He's a puck mover and a playmaker, with an eye on his responsabilities at both ends. One way the league is learning to neutralize him is to take away his wingers. What we are seeing and realizing perhaps, is that the Kostitsyn brothers aren't as good at hitting open spaces with stride and speed, as Mike Cammalleri does.

One last thing on Plekanec. On his empty netter that sealed the win, he had every right to celebrate the goal jubilantly. He didn't. He simply pointed over to Sergei Kostitsyn, with who he worked a perfect give and go. No fist pump. No stick raised. Not a trace of ego. Just a player's player, a teammated and leader, showing respect.

Dominic Moore, still think that Gauthier paid too high a price for him with a second rounder? Ask again, after he resigns with Montreal and plays another season. This guy is good.

The umpteenth re-evaluation of the Gomez trade

I've long sat on the fence as far as the Gomez trade goes, and my butt don't take kindly to barbed wire. There are games when I like this Gainey deal more than others.

With Plekanec, Gomez gives the Habs two potential centers who can notch 40 assists. Add in that Christopher Higgins has been dispatched to Calgary, and that Tom Pyatt acquired in the same deal is making an NHL contribution, and the trade is all win/win for the Habs so far.

Now that Gomez salary is a whole other gumbo.

Benny worth every penny

Benoit Pouliot scored his 13th goal in 23 games with the Canadiens since being traded for Minnesota for Guillaume Latendresse. Pouliot has missed some games due to injury, but in my mathematics, his scoring ratio is on par with a 46 goal season.

Everytime Pouliot scores a goal, his future bankers drool, because he ought to hit a handsome payday, if not this summer, then the one following. He'll be worth it.

This summer, if I am Pierre Gauthier, I offer him a five year, fifteen million dollar deal. Am I nuts, or is Benny crazy not to jump at it. Again, if I'm Pierre, I roll that dice.

Halak worth as many pennies as Rinne?

Nashville Predators goaltender Pekka Rinne has fashioned a 52-28-8 record since 2005-06, on what could be fairly termed, as defensive team. In a parallel time span, Jaroslav Halak has posted comparative numbers (47-31-4 since 2006-07) with the Canadiens.

Why I bring this up, is because Halak can take his contract offer to arbitration this summer. Rinne has recently signed a deal paying him $3.4M over the next two seasons.

Halak will argue, and likely win, that he is worth as much.

Carey Price's entry level contract also expires this summer, but he is one contract away from qualifying for arbitration.

If you believe that the Canadiens can continue on with two "goalies of the future" into next season, I sincerely hope the one you like, won't be the one you miss.

With both Plekanec and Pouliot due well deserved raises, and with a salary cap destined to shrink, one goalie is a definite goner.

The Lapierre 4 game suspension and the continued pussification of hockey

Before you jump all over me on this, consider what is and isn't a hockey play.

A winger (Maxim Lapierre) is in pursuit of another winger (Scott Nichol), who is on a breakaway. The pursuant is by reknown, more fleet of foot and stride than the player being chased. The goaltender makes the save on the play, but the rebound redirects straight up into the air. The attacker (Nichol), unnacustomed as he is to breakaways, slows, and attempts to bat the descending puck at the right edge of the crease. The pursuant Lapierre, a step or more behind Nichol, makes an instinctive hockey play, by crosschecking Nichol from the area. Replays show that Nichol was already off balance by the time Lapierre gave him the stick shove. It is also apparent that Lapierre was in the final extensions of a crosschecking motion, when he made contact with an already off balance Nichol.

With an official in view of the entire play at the goal line, a penalty was not called on Lapierre.

Furthermore, a scrum ensued, without a San Jose soul going after Lapierre.

I say pussification because the NHL is so intent to cover their tails, they penalize and suspend based on the result, moreso than the actual play itself. Scott Nichol did his best Mike Ribeiro immitation after playing up the injury. Like Nichol entering the scrum, after looking like at stretcher case for a few seconds, then rising to be a scrum participant, didn't give the lark away from the get go.

It was a hockey play, nothing more, nothing less, in the heat of action and reaction, that deserved at best a two minute minor. Four games, is nothing more than the NHL disciplinarians trying to convince bleeding hearts that they are on their side. 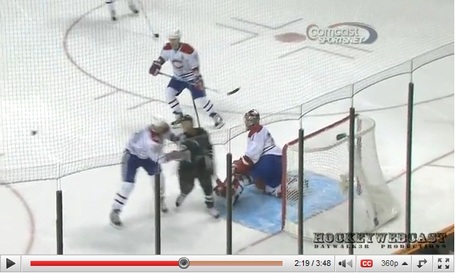