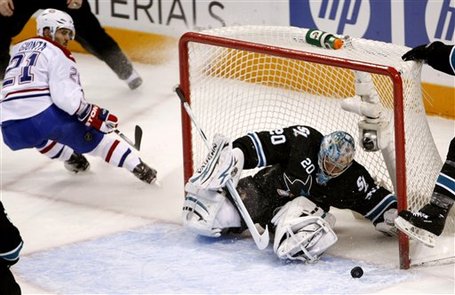 The Canadiens started the game against the Sharks in ninth place in the Eastern Conference. That, after beating Boston Tuesday, to move into seventh with 66 point. On Thursday, wins by Atlanta and Boston, and an overtime loss by the Rangers created a cluster from seventh to tenth, with the Bruins at 67 points and the other three at 66.

The Canadiens will need to win 11 of 18 remaining games to give them 88 points, a likely mark to reach the post season. After the Sharks game, the Canadiens have 17 games remaining, including nine at home (Lightning, Oilers, Bruins, Senators, Panthers, Devils, Hurricanes, Sabres and Maple Leafs) and eight on the road ( Kings, Ducks, Rangers, Leafs, Sabres, Flyers, Islanders and Hurricanes).

The scenario made it imperative that the Canadiens come away with two points against San Jose, and they came prepared to battle with one of the league's best.

Notice that the Habs have started growing their playoff beards early?

The razor's edge might have been left behind, but the right edge, that of an ill mood, a bristling attitude and proud defiance was present aplenty. 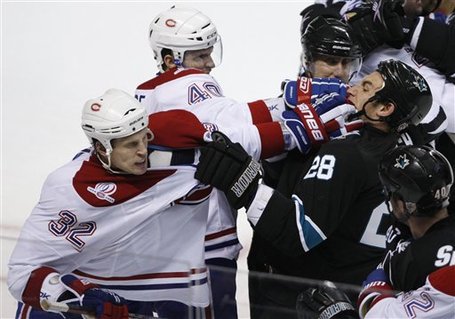 It was personified in the play of goalie Carey Price and forwards Tomas Plekanec and Benoit Pouliot, who weren't about to be too impressed to be playing the elite Sharks.

It was the type of game one wishes the players were miked live, as the Canadiens were surely saying and doing things to get under the Sharks player's skins.

The Canadiens started off on the right note with a Brian Gionta goal at 10:20, and the teams played evenly in the first period, with San Jose outshooting Montreal by 15-11 margin.

A key point in the game came in the first minute of play, immediately after a power play lapse that allowed the Sharks Patrick Marleau to knot the game at one with a shorthanded goal. On the play, Habs defenseman Jaroslav Spacek took his sweet time pursuing a check along the boards, and his hesitance left the slot uncovered. Marleau's shot was deflected by a late-to-arrive Spacek, giving Price no chance on the play.

The game remained tied for all of 1:13, as a Scott Gomez pass redirected off a Sharks defender to restore the Canadiens lead.

The remainder of the middle frame was a treat for those who like their hockey on the nasty side. Nine minor penalties do not begin to tell the tale. The Sharks may have heard that the Canadiens often turn soft when bullied, but on this night, the Habs responded and administered as good as they were given.

With the Sharks gaining the edge in play, Price took over, offering one of his most solid periods in a good while. He made several astounding saves, even stopping the Sharks Dan Boyle on a penalty shot. 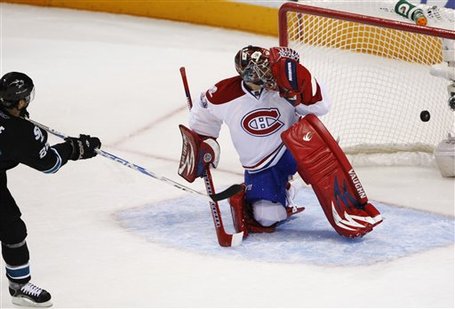 The second was filled with all sorts of shenanigans. A Plekanec hip check gone astray raised the ire of Sharks players, who hunted him down the rest of the way.

The third period picked up somewhat where the second left off. A cross check from Maxim Lapierre to the back of Scott Nichol after a scoring chance maintained the on ice vinegar level. Dominic Moore, minutes later took a bite out of the Sharks crossbar that also went unpenalized.

The Canadiens mission to frustrate and annoy had kept them ahead up to this point. They had won puck battles and generally played with elbows extended, but almost like an unconfidence reflex, they began sitting back. The Sharks took the play to them, and the rink soon seemed to be tilted towards the Canadiens end.

You could almost sense what was coming next. Further bottled up in their own zone, the Canadiens were pinned in by the Sharks for the majority of the next 90 seconds. Ultimately, it lead to defenseman Roman Hamrlik taken an uneccessarily hooking call on Ryan Clowe. On the replay, the foul looks to be nothing but one of many, completely ignorable penalty along the boards in this game. Hamrlik did nothing more than clamp his stick over Clowe's in a battle for possession of the puck.

The man advantage was all San Jose needed to begin wrestling control of the game away from Montreal. On the ensuing powerplay, Dany Heatley redirected a point shot past Price to make the score 2-2.

Moments after the goal, Andrei and Sergei Kostitsyn, accompanied by Hamrlik, broke in three on one, with Sergei flubbing a chance to put Montreal back ahead, the pass coming from his brother off his skate.

One team's misfortune is another team's break, as it often goes. Shortly after the Canadiens glorious chance passed, the underrated Manny Malhotra put the Sharks up for good, beating Price to make it 3-2.

In the fading minutes, the Canadiens had their chances, as Glen Metropolit hit the post short side on Evgeni Nabokov.

With Price set to be pulled for an extra attacker, Andrei Markov was bltantly tripped in a play along the boards. After the similar and dubious Hamrlik call, imagine RDS's Benoit Brunet being a little more than beside himself at this non-call.

The game ended with a brief flurry around the San Jose net, with Pouliot getting a backhand chance away with mere ticks left on the clock.

The Canadiens will surely take something from the effort, althought it fell short. What they had needed to take was two badly needed points.

They might not want to shave those beards or raze that edge before hitting Los Angeles and Anaheim before the weekend is out.