Are The Canadiens About To Be Excluded From The 2009-10 Post-Season?

Share All sharing options for: Are The Canadiens About To Be Excluded From The 2009-10 Post-Season? 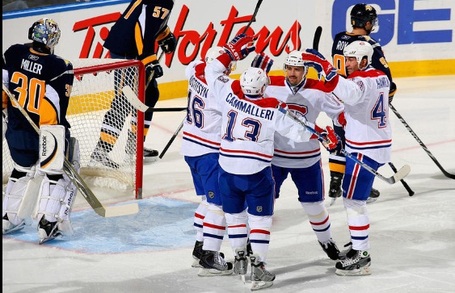 When the Canadiens were on a six game win streak a short time ago, the playoffs in 2009-10 looked to be a lock. Now what appeared to be a sure thing just 10 days ago now seems much more tenuous, as all teams around them have tightened the race as the Habs have won but one of their last four.

As it stands, the Canadiens are now in a three way deadlock with the Philadelphia Flyers and Boston Bruins, all with 82 points after 76 games. By virtue of games won, the Flyers with 38 sit sixth, Montreal are seventh with 37 wins, followed by Boston with 35. The Atlanta Thrashers, with 80 points are sitting ninth, two points up on the New York Rangers, who own a game in hand. Both clubs have 34 wins. Atlanta is the only team at present with five games remaining. The other 4 teams have six games left to play, including Montreal.

In the Northeastern Conference, the playoff race is essentially all but over for the Carolina Hurricanes, the Florida Panthers, the New York Islanders and the Tampa Bay Lightning. Any combination of four standing points earned by all of the Flyers, Canadiens and Bruins would eliminate each.

Last night, the Thrashers defeated Toronto 3-2, the Rangers shaded the Islanders 4-3 and the Bruins shut out the New Jersey Devils 1-0. For Habs fans watching the race with nervousness, it was an 0 for 3 night in terms of the Canadiens receiving outside help.

Over the next twelve days, the race will surely tighten and go down the wire - possibly for all five teams still alive and in the hunt. Here is what each team has staring down at them between now and April 11. 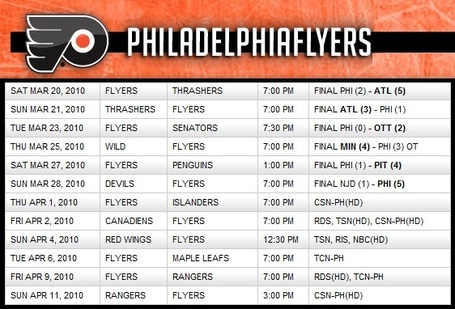 The sixth place Flyers have six games remaining. Philadelphia are on the road for three of those, against the Islanders, Maple Leafs and Rangers, and host the Canadiens, Red Wings and Rangers at home.

Philly are 3-5-2 in their last ten, and 1-3-1 in their last five. They are battling terrible goaltending woes, relying heavily on third stringer Brian Boucher. Lost for the balance of the regular schedule is center Jeff Carter. Forward pest Daniel Carcillo has been suspended for two games.

Being that the Philly goaltending is so suspect, the will have their hands full with Detroit on the 4th, and possibly the Canadiens two nights earlier. The home and away dates with the Rangers will be hard fought. Philadelphia should be favoured at home against the Islanders and Toronto, although the Leafs are mighty hot at present, enjoying a 6-3-1 run. 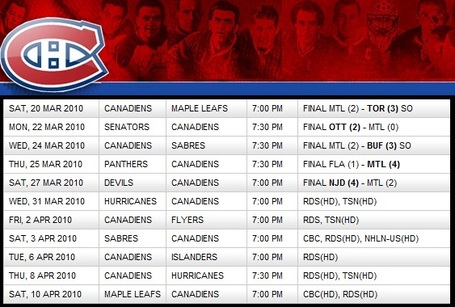 The Canadiens, sitting seventh, have one win less than the Flyers, with an equal number of games played. The teams face each other in Philadelphia on Friday Like the Flyers and Bruins, Montreal has three games on the road (Carolina, Philadelphia and Islanders) and three at home (Carolina, Buffalo and Toronto).

Montreal's 6-2-2 push in the last ten games brought the club from the outside looking in, into playoff position, but a recent dip has them at 1-2-2 over the past five games. The Canadiens biggest woes this season have often involved icing a full healthy lineup. While that is far from unlike the challenges faced by other teams, it seems a new tile is ready to fall on their heads with each successive game. With Mike Cammalleri and Marc-Andre Bergeron having finally returned, the Habs lost Travis Moen for two games with a skate gash over the eye. Upon his return, Montreal lost a key component in center Glen Metropolit, out for the season with a separated shoulder.

With the Canadiens top two line intact and six healthy defensemen, they should take points from Carolina, Philadelphia, the Islanders and Maple Leafs. The game against Buffalo will be a pivotal playoff test against a possible first round opponent. 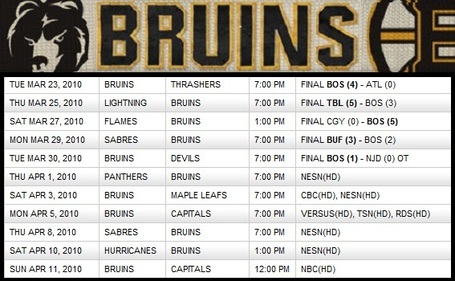 The third club in the 82 point logjam are the Boston Bruins, who have been coming on strong as of late. Despite the loss of center Marc Savard for an undetermined time, the Bruins are 5-5-0 in their last ten, and 3-2 in their last five, including shutouts over the Thrashers, Flames and Devils.

Boston's season has so far been a tale of very hard luck, but they can never be counted out as recent showings attest. The loss of Savard has forced them into an early playoff mode and they have responded against very strong teams.

The Bruins, who have an even .500 record on home ice, will play the Panthers, Sabres and Hurricanes on home ice and the Maple Leafs and Capitals (twice) on the road.

Possible points: 7 or 8 of 12 would be consistent of recent form. 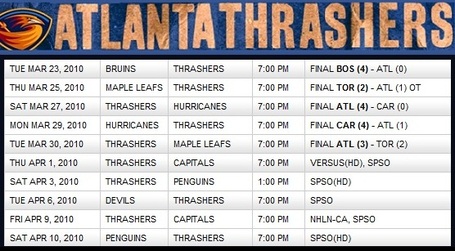 The Atlanta Thrashers, sitting on the bubble in ninth place, simply refuse to die. With 80 points on the season, they are two back on the Flyers, Canadiens and Bruins, none of whom they will play in their final five games.

The Thrashers are 6-2-2 in their past 10 games, including a 2-2-1 string in their last five. Of the five clubs in the fight for the final three positions, Atlanta is in tough, to say the least. Three games on the road against the Penguins, and Capitals (twice) and home dates with the Devils and Pens await.

While Atlanta has come out looking good after parting with Ilya Kovalchuk and Kari Lehtonen, the opponents they will face present a monstrous task.

Possible points: 4 of 10 alone might be a task, any more a surprise. 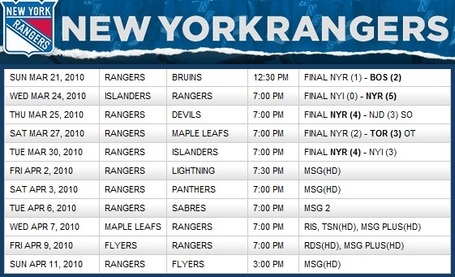 The New York Rangers can be accused of being as streaky as any of the four clubs they are chasing down. Currently, the Rangers are on a 5-4-1 string, with an 3-2-0 upswing of late, two of those wins coming against the rival Islanders.

Chameleon-like, the Rangers can present a tough opponent on some nights, and appear completely indifferent the next. Several players are said to be underperforming under coach John Tortorella. While any team lead by always dependable goalie Henrik Lundqbist and the dazzling Marian Gaborik should be able to build a contender, many of the Rangers assets are overpriced and inconsistent.

The Rangers have six games remaining, with four on the road (Lightning, Panthers, Sabres and Flyers) and two at home (Maple Leafs and Flyers). Whatever the Rangers fate, it could all come done to the final home and away dates with the Flyers on the final weekend of the season.

Possible points: 6 or 7 of 12, with the Flyer's games being wild cards.

In the Canadiens scheme of things, all hope are permitted. They have a winning record against three of the five teams they will and have played Toronto fairly even all season. In Montreal, they are capable of beating Buffalo and the Flyers are a very wonded bunch ready for the taking.

In terms of their competitors schedules versus their own, the Canadiens are also favored. The Bruins and Thrashers are in tough playing top clubs, with may or may not be a good thing. The Rangers / Flyers doubleheader is a good thing for Montreal, unless both contest result in three point splits. Also favorable to Montreal are the Rangers four road games.

What isn't a blessing for the Canadiens is that the teams currently fighting for spots do not play one another very much. In time that can work in the Habs favour, but for now they have destiny in their own hands and can expect help from no one.

In a final analysis, the hill is extremely steep for Atlanta and New York and the odds say neither can pass the test. The current standings could very well remain as they are.

In the event of a tie, the first tie breaker is games won. The second is teams records versus one another of the season's course, and the third is goals scored during the season.