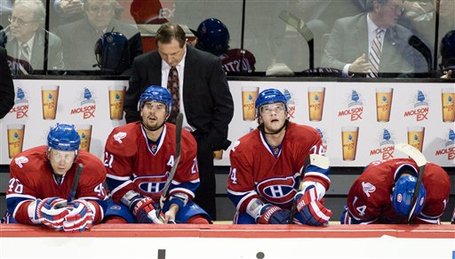 I hate it when something ruins my hockey viewing experience, but I cannot help it. I despise it even more when something happens, and I simply cannot get around it.

It eats at me when a game of hockey is affected by an incident that in normal circumstances and all good reason should never have occurred as it did.

It further rips at my gut when I see the players in the game not exactly getting around it.

I'm not fun to be around at times like this. I turn the air blue with anger.

You have guessed that I am talking about the call by official Chris Lee on Roman Hamrlik for "tripping" Ilya Kovalchuk at 7:31 of the first period that lead to a Devils goal by Patrick Elias on a 4 on 3 powerplay 40 seconds later.

On the play, Hamrlik dove to play the puck on a breaking Kovalchuk, who managed to get a shot off and never fell on the play, which in my eye is kind of the essential to making the call.

Lee is far and away the most incompetant official working in the NHL today. I have come to totally dread the games he works, and I'm far from alone. I'm a Canadiens fan of course, but I am sure that Lee is equally baffled in games that involve the Leafs, Bruins, Sabres, Devils or any of the other 25 clubs.

His decisions are beyond comprehension at times. This one was the last straw for me. I will no longer watch games Lee works, nor will I buy tickets to games he is scheduled to work. As I said, it ruins my experience, to know that the playing out of a game is compromised even before it begins because of this doof.

The NHL must be aware of how "good" Lee is. Entering the 2009-10 season, he had officiated in 444 contests but only four in the post season. Kind of says it all!

No credit to the Habs for their reaction to Jersey scoring the go-ahead goal. The Canadiens totally wilted after almost dominating the first five or so minutes of the game. After the Lee blown call, they seemed sapped. I can understand such a reaction, but still, it is not what we want to see happen.

What angers me more, and I'll climb that high horse again, is that Jacques Martin's response to the Lee boob tends to show agreement with the call. Martin again did squat!

Morose and as good as moribund, Martin and his decided practicality likely insists that once the call is made, right or wrong, it's best to just get over it, move on, and get on with killing the penalty. No use in getting worked up about it something that cannot be changed. Best keep one's emotional factions together and forge on.

A team, in a moment like this, needs to feel their coach is right there with them. It doesn't hurt to round the troops under the "we been screwed" banner. It motivates. It recharges. It brings everyone along for the cause of the team. Doing nothing, does nothing. Remember Roger Neilson and the waved white flag? Did that reaction spur on the '82 Canucks?

Martin does have the fire, nor the gut instinct to coach the Habs. He's the anti -reactionary. He's Mr. Jones from Bob Dylan's "Ballad Of A Thin Man".

Lee's incompetance and Martin's obliviousness were two nails in the Canadiens coffin. The final and true killer though, was the Habs' gone for dead power play. The unit simply has no focus or focal point.

It was supposed to be that the return of Marc-Andre Bergeron would reinspire the PP, but it has further messed with it. I don't see any cohesion between Bergeron and Andrei Markov at all. They do not work together at all. Instead of quarterbacking, Markov instead wastes too much time pinching, leaving Bergeron alone to fend off the tight coverage he's given. Clue - Bergeron's point blasts are a secret to no one, and neither is the way to defend it. With no space and time, he'd been rendered useless. In order to provide options for him, and Canadiens forward must come out nearer to the point, so that Markov and Bergeron aren't pigeonholed by their own strict rigidity. Such movement restricts effectiveness at the net, where (in this case) the Devils PKers and nice and spread out, pushing the Habs to the perimeter.

Not having Glen Metropolit's right handed shot for the better part of the last two games has not helped, but it had reached a point of inneffectiveness before that time. In my view, better to have a crease pest the likes of Mathieu Darche creating havoc in front the goalie and keeping one defenseman very occupied down low. For you to discuss.

Here's some of what could be called Chris Lee's Greatest Hits....