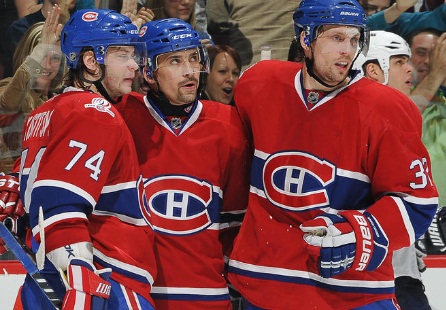 I had a very distracted viewing of the Canadiens 4-1 win over Floorida last night, in fact I watched a good slice of it on the radio (!), running about town on my daughters errands. (Props to the excellent Dany Dube and Martin Maguire for making a snoozer for long stretches seem like the '71 Cup finals, as always.)

Now correct me if I am mistaken, but by all appearances, the Habs contained and controlled the Panthers much in the method that they did for all of three minutes the night before in that Buffalo heartstabber. Shot totals tend to back up that perception, considering Florida's snipper pack all the whallop of a wet Kleenex.

Watching the game over on the RDS Express version robs about 28 minutes of hockey from the experience, so I will do my best to offer you readers some random takes of how the win looked my POV under these unusual circumstances, as well as some other obsvervations and stuff. Alot of what I'll touch on has the Sabre game aftertaste.

First, let's start with some peripheral things. Two nights ago, there was some amazement that Maxim Lapierre had been left aside for the game, and tonight it was Glen Metropolit and Mathieu Darche's turn.

Many will scratch their heads and expound on coach Martin's sitting choices, but the reality is that the lineup is finally healthy (75 games in, no less)for a rare moment this season, and with the club carrying the 23 body limit, the role players will be in rotation from this point on. My guess is that the coach won't base sittings strickly on performance, but on age, opponent and hunches. Get used to it - it's not a bad thing.

Looking ahead to Saturday, I'd scratch Bergeron and Pyatt - but we'll see.

It's hard to seek and find a comparable between an also ran like Florida and Buffalo, who's looking to clinch first place in the Northeast, but the similarities in how both games played out brings about one comparable from the Habs' angle.

In both contests, the Canadiens built a two goal lead. In both, the opponent scored in the final five minutes of the game. In one instance it was costly, last night it wasn't. But it scared, didn't it? I felt the deja voodoo, and my guess is that you did as well.

Now what bugs, is twofold: Can't the Habs find that killer instinct that nets them a third goal when it is needed, and what makes them so vulnerable in those final minutes?

The answers are floating out there somewhere, and I wish I had them, but I think it all begins and ends with confidence, in both regards. The team is still in the midst of a formative season, with an identity in flux. That old chemistry experiment thing. Time and experience serves that notion. Hey, I'm as impatient as you are!

Nonetheless, every particular Canadiens game these days has it's own individual weirdness to it, it seems. In this one, there were but 11 stoppages in play in the first period, and through the course of the game, although Montreal held an edge in shots an scoring chances, they also garnered double the penalty calls.

After the first period (which I got to watch in whole), I wasn't too comfortable with how the Habs earned their two goal lead. The Pouliot goal was a blatant and blind giveaway by Bryan Allen; the Gionta goal a long shot gift from Tomas Vokoun. Goals such as these do not fall into my category of "earned goals" or even "forced mistakes". They are filed under "mental lapses by unfocused teams with little to play for." 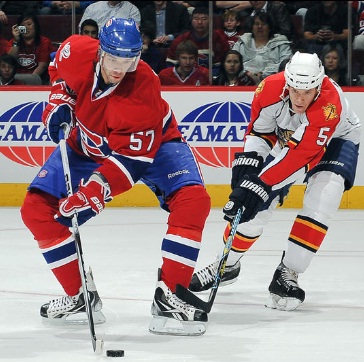 Maybe I am at heart an eternal cynic, but how much stock can you put into a win over lame duck Florida in game 75? All I'm watching for, is how individuals on the team play in various circumstances. The concerns are still many.

Starting with the team's supposed best player, Andrei Markov. I hate to admit, I'm seeing alot more than I don't like from the Habs general of late that I do. He's taking ill-advised risks at inorpportune times; he's pinching when his experience suggests he should pull back and he's not very disciplined these days, acting like he's practically beyond reprehension in team ranks.

Markov's errors against opponent's top lines leads to goals and scoring chances. Before the Pouliot goal, Markov made a compromised pinch in the Panthe'rs end that lead to him getting back late on a rush. He was figuratively served a cup of coffee by Nathan Horton - totally Starbucked - late to arrive and playing puck instead of body on the play. Because of his importance to the team, and Halak's great save, the move goes vastly unobserved.

On the subject of Markov, am I the only to notice his unwillingness to share the puck with Marc-Andre Bergeron on the PP? Andrei is too keen to pinch off the left point, leaving MAB to fend for hinself. The Canadiens PP no longer threatens, because there is no point threat. Bergeron's return has been remedy, and as I see it, that's Markov fault.

A positive has been the Habs PK unit of late. Notice that when it works best, the four man box is spread out nice and wide. When it is nervous and fearing,it collapses back towards the goalie, as was the case with the two late Buffalo goals on Wednesday. Against Florida, the wide box never let up, pressuring all four points.

A final note....why is it that Tomas Plekanec is so often booted from the faceoff corcle? Late in games with one goal leads, it is a good idea to have a second centerman on the wing incase such a thing happens. Late in this game, Martin had Gomez out there. It was a good move.

Here's something that you might not have considered before seeing such a stat. The defending Stanley Cup champion Penguins have two centers who have over 40 assists this season. Of course, they are Sidney Crosby and Evgeny Malkin.

Only seventeen NHL centers have over 40 helpers thus far. Kind of stunning when you think about it.

Only one team has two centers in that group.

Two risky moves by Bob Gainey last summer were the resigning and re-upped of Tomas Plekanec and his contract and the other was the controvercial Scott Gomez trade.

To win a Cup, the Habs must compete, in their conference, with the Pittsburgh middle troika of Crosby, Malkin and Staal. That's not easy to do, but what Bob enabled is a step that direction. Still hate that trade?

All that said and rambled, my play of game was Gionta's second goal, with mere ticks left on the clock, a lame Floorida defender and an open net. Gionta's effort was "no quit" personified.

An ubiased and fair take on the Jaroslav Spacek hit on David Booth - via Kevin van Steendelaar's Ya! The Habs Rule site

Something we all ought to petition, as Canadian hockey fans