Martin Comatose As Habs Get It From Behind In Buffalo

Share All sharing options for: Martin Comatose As Habs Get It From Behind In Buffalo

The ending of Canadiens game number 74 are the Buffalo Sabres and their coach in a nutshell.

It should be taken note of that the Sabres rarely ever quit on a game, as the Habs might just find themselves facing Buffalo come round one.

How does one come to grips with a game such as this. It was like watching a love story for 57 minutes, and then seeing the babe of the script unzip her head to reveal a wildebeast!

Consider the Canadiens played near textbook hockey, the closest display to that ideal since the Olympic break. Then, the wheels abandonned the wagon, the wings flew off the bird, and the parachute straps came flailing off on the downfall.

Bewteen minutes one and fifty-seven, came two pivotal moves by Sabres coach Lindy Ruff that are perfect demonstrations of in-game coaching, a science, as I've mentioned before, that is lost on the Habs stoic benchboss Jacques "I've coached the boys, now it's up to them" Martin was schooled by Ruff.

The first ripple caused by Ruff came after seeing his team sink to a 2-0 deficit after a too-many-men on the ice call and immediately upon a slashing call one minute later to Jason Pominville. Ruff, likely barked that the calls we're all going one way, and let officials have it. It was hard to see all with the camera angles offered by a game broadcast if he was in fact right or not, but that was hardly the point. The raising of tones from behind the bench is a strategic one. Occasionally, it does serve to get the refs to back off some and become more selective, but it is done just as often by coaches to shake up the troops.

From then on, and not magically, the Sabres began looking just a tad sharper, and, magically, the refs stopped noticing the Sabres had sticks. Momentum Buffalo's way began at a crawl pace but it wasn't until the third period, one in which Buffalo outshot Montreal 17-8, that things go serious.

A rare penalty call to Carey Price, (at 13:13, for the superstitious) for playing the puck inches outside the trapezoid, was more than a little bogus, especially as a Sabres skated between him and the goalpost, not allowing Price the room to back off once he'd committed.

The Canadiens killed it off masterfully, even generating better scoring chances than their foes. Ditto for the four minute high sticking call on Benoit Pouliot that ended the second period and started the third.

The pendulum of third period thrust was tilting in the Sabres favour, when with a little less than seven minutes left, Sergei Kostitsyn was hauled off for one of those "blink and you've missed it" hooking calls. Watching the play along the boards three or four times now, I still fail to see exactly what made it stand out. As such things go, I figured the next, least likely Buffalo foul would bring about a raised arm.

The Canadiens again excelled on the ensuing kill, but the Habs' coach missed his chance to immitate Ruff's tactics during the Sabres two man advantage. During a clearing attempt, Scott Gomez (killer in this game on PK) was hooked inside the Montreal end by either of Tomas Vanek or Derek Roy. Although Gomez got the puck out, Martin should have started screaming bloody murder, if for no other good reason than to simply let officials know his eyes and mind were working.

But two hands in his pocket from this point on, Martin did little to alter a game that was getting away from his team in the late stages. The Habs managed the kill, but Buffalo were getting shots on net where they weren't before. One noticeable ploy, was to fake shots or passes to the goal in succession - Hal Gill looked like he was doing pushups! - and then feeding it to the opposite side. The Canadiens four man box on the second unit had tightened, and stopped pressuring the points. Betcha Ruff took note.

Had Martin let loose a few verbal birds in the officials direction when he could have, it likely would have earned Steve Montador a hooking call on Tomas Plekanec in the left corner, at the tail end of a scoring chance for the Habs in the Buffalo zone. Instead, the puck was played around the back board to the opposite side, wherein Ryan O'Byrne was nabbed for a high stick only seconds later.

The Buffalo power play set up in the Montreal end, and the trend of Habs backing into a smaller box persisted. With more than two minutes remaining in the contest, Ruff used his timeout effectively, and went over plans with his troops. Soon as Sabres players earned possession, he yanked goalie Ryan Miller for a sixth attacker. Seconds later, Buffalo were blitzing the Canadiens' net in full fury.

Now had Martin, somewhere in time, let officials know of his existence, then perhaps one of the two would have caught onto to what Sabres forwards were up to.

Now no fault to the Sabres players doing what needs to be done to try to win games from being in an 0-2 predicament, but if you caught Josh Gorges being crosschecked not once, twice, but three times in 20 second span by Buffalo forwards one was Pominville), you`ll more than understand my ire. Gorges was attempting to cover the forward in front of him, and each time he moved towards accomplishing that, he was decked from behind. It`s understandable that a ref closes his eyes on the first, but beyond that, it incredulously ridiculous.

Seconds later, Buffalo makes it 2-1, and the camera pans to Martin doing the nervous Inspector Clouseau shuffle behind the bench, saying nothing, doing little, not a shred of a reaction. A timeout call maybe - not a chance!

Pat Burns for one, would have been standing with a foot on top of the boards, gesturing the crosscheck motion for all to see. Since Martin had behaved and seemingly done little to affect their thinking to that point, he might have gained an edge. 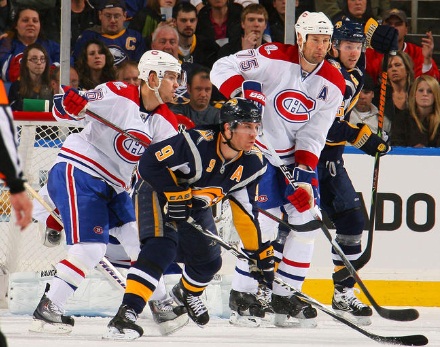 He should at least have called a timeout, for Godsakes! It`s what alert coaches do when they sense games slipping away. Pacing and muttering to oneself in a noisy arena accomplishes squat.

With time winding, the Sabres again pulled Miller, and owned the Canadiens`end - Habs barely touched the puck the whole time - and pulled off what the entire world saw coming once the Sabres had scored the first. The entire world minus.....

The loss for Montreal was more than a simple stab in the heart after such a sound effort for the majority of the game. Forget that they gave Buffalo a good scare that no Sabre player will remember, this is a loss that punctures spirit big time.

With a game on tap right tomorrow, there`s little chance taps on the back to suggest an accentuation on the positives of the loss will do any good.

Loads of stuff went right for Montreal in this one, for those who count such matters. Andrei Kostitsyn found that missing time and space thanks in some part to Mike Cammalleri`s return to the lineup. For 57 minutes, Carey Price looked like his better self, on the way to an impactful win. The PK performers - Gomez, Brian Gionta, Sergei, and Dominic Moore - picked Buffalo apart. The best Hab on the night, Tom Pyatt, looked as though transformed by Martin`s vote of confidence in electing to sit Maxim Lapierre.

It was all for naught and a precious standing point when two were needed. An optimist might wager that two shootout losses equals one win, but a playoff cynic would heartily laugh.

If the post season were to start tomorrow, the Habs would be right back in Buffalo. The cards may still deal Montreal that hand, and it would be a tremendously exciting series won by the Sabres in four.

Yup, four close ones, all decided by a master behind the bench.