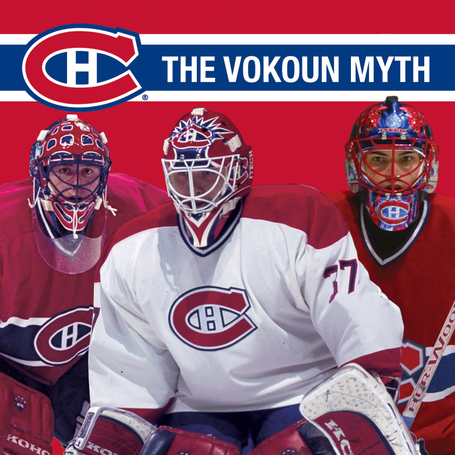 With Team Halak and Team Price continually foraging through their weapons locker for bright new artillery, a forgotten name from the Rejean Houle era has re-emerged. Canadiens fans fearful of the new regime making the wrong decision between the pipes have begun to bring up the name of Tomas Vokoun.

What if Carey Price is Jose Theodore and Jaroslav Halak is Tomas Vokoun? What if they make the same mistake they made over a decade ago and let the better goaltender walk? Think of the parallels. Jose Theodore has the same World Junior pedigree of Carey Price. Tomas Vokoun is an unheralded goaltender born in Czechoslovakia, so is Jaroslav Halak. We have an uninspired simplistic connection folks.

The current situation is in no way comparable to what occurred during the summer of 1998. The parallel requires revisionist history to correlate to the current saga playing out in the blue paint. The biggest factor that is continually ignored in this revised history lesson is the presence of Jocelyn Thibault. Without Thibault, the whole scenario unfolds dramatically different.

During the summer of 1998, the Canadiens were a team who almost pulled of a surprise Conference Final appearance. After knocking out the heavily favoured Penguins in the first round, the Canadiens outshot the Sabres  146-94, yet were swept by the Sabres and Dominik Hasek. The Canadiens were beginning to lose patience with Jocelyn Thibault and for the second straight season had turned to Jose Theodore to finish out the season.

The Predators were to select 26 players, one from each of the 26 existing franchises at the time of the draft.

First- and second-year pros were exempt from being selected in the draft. Each of the 26 franchises in the league were allowed to protect either one goaltender, five defensemen and nine forwards or two goaltenders, three defensemen and seven forwards.

With the Expansion Draft taking place a week before July 1st, the Canadiens were allowed to float UFA Andy Moog as their eligible goaltender who met the 10/25 game criteria set forth in the expansion rules and assure the organization against the loss of the jewel of the Roy trade, Jocelyn Thibault. With neither Theodore or Vokoun eligible for exemption in their third full pro season, Rejean Houle was now forced to make a decision on which two goaltenders to protect.

I have nothing but contempt for the job that Houle did during his Montreal tenure, but is it realistic to criticize the decision he ultimately made? Twelve years in the future the answer became crystal clear, as will the answer to the Price/Halak question in 2022. Re-writing the past to suit an individual agenda or stoke fears is disingenuous. (note: Houle sent Sebastien Bordeleau to Nashville after the Predators agreed not to select Peter Popovic. I do not want to speculate, but if he could have cut the same deal to keep Vokoun and he let him go to keep Popovic...then in the words of Benoit Brunet....ei yi yi)

You can only make decisions based on the information you have at the time. In the summer of 1998 the Canadiens had the following information at their disposal. 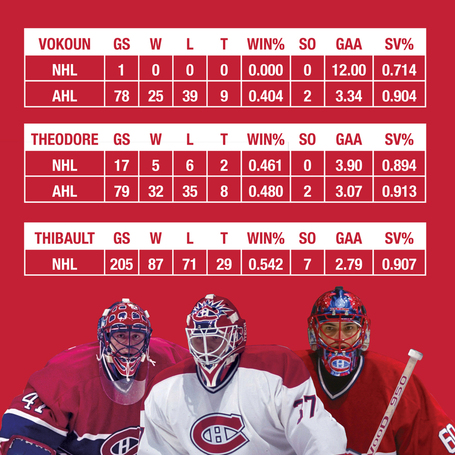 Jocelyn Thibault - Former 1st round pick (10th overall). The main piece in the Patrick Roy trade. Thibault made the leap directly from the QMJHL to the NHL and registered two top 10 statistical seasons by the age of 23. Of the three young goaltenders, Thibault had better NHL numbers than either had in the AHL. He also had 13 games of NHL playoff experience.

Jose Theodore - Former 2nd round pick (44th overall). Jose Theodore had a decorated junior career leading his team to a QMJHL title, earning the QMJHL playoff MVP as well as being named a two-time QMJHL All-Star. Theodore lead the Canadian team to a World Junior title with a 4-0 record, a 1.50 GAA, a tournament All-Star nod as well as being named top goaltender in the tournament. Theodore had been underwhelming in his 17 regular season starts, but had been outstanding in his 5 playoff games, registering a 1-2 record with a 1.66 GAA and a .944 SV%. During his first three professional seasons, Theodore bettered Vokoun's numbers with the Fredericton Canadiens in almost every category in essentially the same amount of starts.

Tomas Vokoun - Former 9th round pick (226th overall). Vokoun's North American path took him through Wheeling in the ECHL and although his numbers are less than spectacular on a strong Wheeling team, he played well enough to earn himself a promotion to the AHL. In the AHL, Vokoun and Theodore split starts over two seasons with Theodore eventually wresting the starting job away. Vokoun earned a short call-up, which lasted 20 minutes and resulted in 4 goals against.

Vokoun was battling the language factor in which his main competition were homegrown superstars while struggling with personal language and cultural disadvantages. He also had to deal with Houle's reluctance to dump the player he received in his most controversial trade, the well known QMJHL resumes of both goaltenders, the Golden Canadian resume of Theodore and the subpar results through the first 3 years of his career.

Based on the information gathered to that point, was there any other decision to be made? The best analogy I have heard in regards to Vokoun/Theodore comes from Habsworld veteran Bulis the Habbie.

The GM that made the call cannot be blamed with hindsight. Think of a poker hand: you have pocket aces and somebody goes all in before the flop. You call. Whether you win or lose the hand, you're not to blame - you made the best decision given the information you had at the time.

An overlooked factor in this whole story is the fact that the summer of 1998 was also the middle of the Quebec goaltender boom.  With Roy and Allaire revolutionizing goaltending with their technical attack on the position, a whole generation of goaltenders were miles ahead of the worlds learning curve. Think of Roy/Allaire's goalie schools as an epicenter of an earthquake in Montreal. The first to gain this edge were the closest to the center of the quake. A generation of kids born in Quebec in the late 70s were being taught a revolutionary way to play the game and plenty were being rewarded with high draft positions based on technique and not ability. Jocelyn Thibault, Eric Fichaud, Dan Cloutier, Jose Theodore, Jean-Sebastion Giguere, Martin Biron, Marc Denis, Stephane Fiset, Mathieu Garon, Francis Larivee, Jean-Francois Damphousse etc etc all high draft choices. While these kids were learning butterfly pushes and learning how to maximize net coverage and remain compact in their movements to cover transition holes, the rest of the world was still playing an antiquated style frought with technical flaws.

Somebody like Vokoun was likely behind the technical development of both Thibault and Theodore in 1998. When he adjusted to North American life and the language and his technique began to catch up to his athleticism, he began to narrow the gap eventually passing both goaltenders. Unfortunately for the Canadiens when this happened he was in Nashville.

Add in all these variables and the impossibility of predicting the future, how can you possibly fault Foule for this decision? You can't. Although there remains some similarities between today and 1998, the added variables of the expansion draft and the Quebec goaltending advantage created a much different scenario. Twelve years ago the Canadiens hand was forced, they did not have the option of patience.

With Halak raising the level of his game over the last 10 weeks, the Canadiens would be wise to let this drama play out regardless of the media or fans desires. As much as the hyperbolic nature of the Canadiens fanbase wants to declare Halak a genuine number one, he has not proven that yet (and no, the Olympics did not prove anything. Look into his numbers as the games became more important. Against Norway, Sweden, Canada and Finland Halak had a horrendous SV%). History is fraught with goaltenders who ascended to the starters role and were exposed in their second trip around the league. For Price, history is also littered with goaltenders that have been rushed and had their confidence destroyed. Both goaltenders continue to tease their potential, neither has taken a firm grip on the torch

The obvious route to take would be to absorb more information before making a rash decision. The Canadiens are not 1-2 players away from a Cup run, so outside of a deal that lands an impact player in return for either goaltender, why deal either of them? The fear that Halak will leave for the KHL is meaningless. If he does, the Canadiens maintain his rights. Like Sergei Kostitsyn, they need to let the players know who is in charge. Forced decisions usually lead to bad decisions (ie. Foule).

Let's see if Halak can maintain this performance through next season and truly earn the title of number one goaltender. Let's see if Price begins to rid his game of the inconsistencies that have plagued the last two months and recapture the form of the 2008 calendar year (coincidently the year when the media dubbed Price the unquestioned number one). This decision could dramatically alter the future of the Canadiens for the next 10 years. It needs to be handled with the utmost care.

The picture will become clearer over the next 12 months. With the NHL determined to curb equipment size to the proportion of the goaltender, how much will this affect the 5'11" Halak? Will it help the 6'3" Price? This is an important question. If Price cannot rebound to his 2008 form and prove to the Canadiens over 2 and a half seasons that he has the work ethic and mentality to lead this franchise, then their conscience can be clear if they feel that Halak is the guy to go to. If Price rebounds and Halak regresses, then you once again have done your due diligence and can act accordingly. If 150-200 games is not enough for Gauthier and Timmins to make the proper assessment, I can send them a nice Centennial Canadiens silver dollar that they can use to make the decision for them.

As much as fans want a definitive answer right now, the Vokoun scenario shows exactly why this is a marathon and not a sprint. History shows that goaltenders ebb and flow and to make the assumption that Halak will be the greater  goaltender based on 60-80 games is dangerous. I am sure the consensus after 2002 was that Foule made the right choice in keeping the Vezina/Hart winner Jose Theodore. Placing your hat on Price's potential alone could leave you with Jeff Hackett and Dave Manson in three seasons.

In order to avoid the Vokoun scenario, the Canadiens should roll out the best young tandem in the league for at least one more season before making any dramatic decisions, anything else is way too risky.