Loss To Ottawa Shows Some Habs Efforts Are Self - Neutralizing

Share All sharing options for: Loss To Ottawa Shows Some Habs Efforts Are Self - Neutralizing 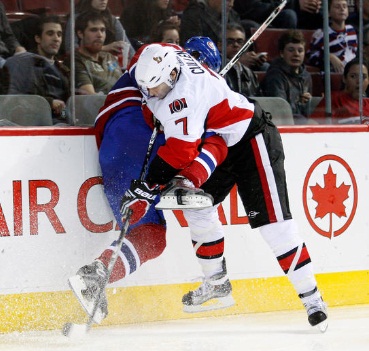 Some hockey games are harder to watch than others. This was one of those. The Canadiens, the past two games, haven't seemed a very creative bunch, and they were neutralized in great part by the Senators. Ottawa removed large chunks of ice, keeping the Habs to the outside and scoring chances at a distance.

There was not a wide gap in the play of both teams Monday night. The Canadiens' mostly disjointed effort went for naught and Ottawa were able to capitalize on the few breaks offered to them.

It's that old line of trying hard but executing badly. Under that topic, two players in this game for Montreal typified the whole of the team, in terms of what's not working these past few games.

I'll apologize ahead of time, for the narrow focus of this article. By game's end, I'd realized I had locked into something, and the manner in which this game did unfold kept me on those one or two points.

Scott Gomez has been one of the better Habs over the past ten game stretch, but he and his linemates did to add some variety in how they attack the opposing blue line. When what I am seeing has become predictable, i assume that is what makes it easy for opponents to counter.

Andrei Kostitsyn, who falters when time and space is taken away from him, is not doing the things that ought to create time and space for himself. Without Mike Cammalleri's speed on the opposite flank, his misdirected efforts are grinding down whatever Tomas Plekanec manages to accomplish.

Gomez is typically swift through the neutral zone, and defenders generally give him the blue line based primarily on his speed. Why the trio often hits a wall is that Gomez either dishes off too soon once inside the zone or blindly throws into open space hoping a linemate takes possession. As Gionta usually trails for passes and Benoit Pouliot is far right and not gaining enough of the middle on break ins, the play reduces it's own options down to pure luck and bounces.

What nags is that Gomez seems unwilling to take the hit along the boards that would enable his mates to gain more speed and distance in attacking the net. Gomez's coiling and lobbing a soft dump into the corner or behind the net is becoming a rote move, a mechanical and habitual reaction to the least of coverage. If his linemates were blasting the blueline a stride ahead of him, some of his attempts would have a better chance of chance of working. But because Gomez seems to prefer crossing the blue paint diagonally, with shifts and dekes at the last moment, he throws off the spped accumulated by either Gointa to his back left or Pouliot cutting for the middle.

Ottawa picked him apart for these reasons and there has to be some variance in his approach, or that of other mates for a change, in order to back defenders up an extra six feet. What Gomez is currently doing is akin to a painter working only a corner of his canvas. 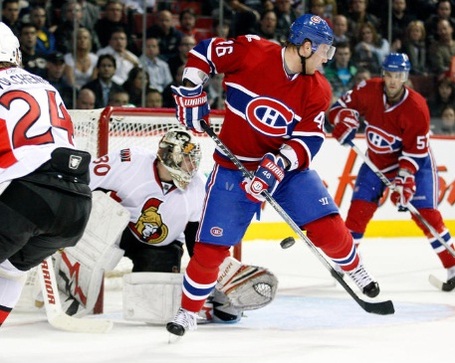 I see a frustrated Andrei Kostitsyn fighting with the puck at every possession. He seems pressed for time even when it's offered; he looks like he's working in a phonebooth when there is room to manoever. Much of what Kostitsyn is working to achieve comes from his hands, which is exactly what the lack of space and time remove from his assets. Andrei will never be quick foot wise, unless in high gear without the puck. In puck battles, there is no foot fleetness to serve him well. He has to go about his game with the intent to create the space needed for him to execute better and make smarter decisions.

For Kostitsyn, it all ought to begin away from the puck. A slow starter in a standstill, he must keep his feet moving to remain alert, open and keen to throwing his weight around when needed. As it sits, Andrei is a still target for passes, a witness to the play rather than a participant in it. He too often watches what Plekanec is about to do, rather than forcing, with his speed and size, and additional option in which his center can somehow serve him.

Notice how he often seems caught off guard with the passes and pucks that find him? I attribute that to a fear of him being caught up ice and blowing his defensive coverage. One facet of Mike Cammalleri's game that goes unnoticed, is his ability to get back into the play when it turns the other way. That asset allowed Kostitsyn to go deeper, unfearful of consequence. In that odd way, Cammalleri's speed created Kostitsyn's working space. For that, Cammalleri cannot return too soon.

For the rest, the Canadiens did not play like crap, but I found that the lack of creativity enabled Ottawa to handcuff them badly. The Senators were masterful in preventing the Habs penetration, but Montreal made it easy on them. Simply put into perspective, what the Canadiens did well in winning six straight has stopped working.

Time perhaps for a change in artilliary.