Share All sharing options for: Habs proving pundits wrong ahead of playoffs 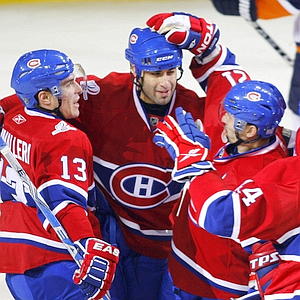 While the Montreal Canadiens have acquired precious points in seven straight games, more and more people are starting to notice a trend: the Habs are showing up to every single game. One reason they’re in the thick of things – currently tied for 5th place in the Eastern Conference – is that they’ve finally found a way to compete against any opponent. But what explains this?

Up until the end of 2009, fans and media alike would often criticize the Canadiens for having a hard time beating teams which were below them in the standings. When playing traditionally stronger teams, it seemed, they would put in a better effort and that would lead to much better results. With the intense pressure to succeed and the omnipresent scrutiny that comes with every Habs performance, it’s not very surprising to hear such comments among friends and co-workers.

Therefore, I wanted to look at various factors and statistics that might help explain why the Habs were finally having prolonged success, regardless of the opposing team.

Let’s start with the team itself. It seems as though coach Jacques Martin’s patience has finally paid off, as his offensive trios have definitely exhibited cohesiveness and chemistry in the past month and a half. Brian Gionta, Scott Gomez and Benoit Pouliot are rarely, if ever separated and Tomas Plekanec's emergence as a first-line center couldn't have come at a better time. With the impending return of sniper Mike Cammalleri and power-play specialist Marc-Andre Bergeron, it'll give Montreal additional weapons going into the post-season.

Furthermore, Glen Metropolit (10 power play goals) and Sergei Kostitsyn (staying out of trouble!) have received heaping praise from Martin for their various contributions to the team's recent successes. Another imperative move was the old "switcheroo": getting rid of underachievers Matt D'Agostini and Georges Laraque and replacing them with Dominic Moore, Tom Pyatt and Mathieu Darche, players who aren't afraid of a little hard work. The effects were immediately noticeable, on and off the ice.

On defence, Martin has stated several times that he has confidence in all three of his defensive pairings, and that he’s willing to send any one of them out to face the opposing team’s top line. Ryan O'Byrne is establishing himself as an effective stay-at-home defenseman and playing with Andrei Markov has certainly improved his overall game. 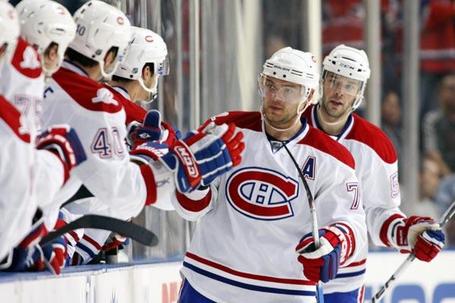 The next vote of confidence goes to the goalies, the talented duo of Carey Price and Jaroslav Halak. While the latter has been largely responsible for his team’s success this year, Martin will definitely have to rely on both of them until the end of the season. My colleague Chris Boyle has an in-depth analysis of both Habs goalies for 2009-10, comparing every imaginable stat in trying to discern a particular advantage for one or the other. He concludes that up until the end of 2009, Halak had played 40% of his games against sub-.500 teams while Price had only played 18% of his games against the same teams. As a result Halak enjoyed a substantially better record against weaker teams, but Price’s winning percentage against teams with a .500 record or higher is substantially better than Halak’s. However in the past two months, Halak has been in net for wins against , , , and . It just goes to show that both goalies can be counted on in big games. Although Price hasn’t seen any rubber in two weeks his patience on the bench can only mean more maturity for the budding star.

GM Pierre Gauthier also has a hand in the team’s recent success, as he boldly proclaimed (during the Olympic break) that he didn’t need to make any transactions just yet, that he trusted his core players and that he was unwilling to sacrifice his team’s future through trades. His decisions are already bearing fruit as the Habs’ farm team, the Hamilton Bulldogs have just clinched their first division championship since 2003-04.

Looking outwards, there is no discernable trend for the Habs against stronger or weaker teams. Let’s analyze the head to head match ups (last 5 games played) between the Canadiens and five of the typically stronger teams in the NHL the past couple of years: , , , and . The record against them stands at a dismal 8-17, a winning percentage of .320. Conversely against typically weaker teams such as , , , and , the record is noticeably better at 13-12. I picked these teams to show an example, but there are many other exceptions to this rule, as we are 5-0 against and 4-1 against . Yet, the Habs are still hanging on to a playoff position. Here’s another reason why: team parity.

After the lock out in 2004-2005, a new salary cap was introduced. This year it stands at $56.8 million and because of it many traditionally strong teams aren’t able to keep all their best players, as found out the hard way when they lost Marian Hossa. Because of a newly established balance between all 30 NHL teams, it’s become likely that any team can win on any given night, regardless of injuries, home ice advantage, etc. Thus, basement teams such as Edmonton, Toronto and Colombus are now beating elite teams for the simple reason that they have nothing left to lose (and doing teams such as Montreal huge favors).

In 2005 Ken Holland famously claimed that "all 30 teams would miss the playoffs at least once over the next five seasons" (read Kevin Allen’s excellent article on parity in the NHL). Unsurprisingly he was almost right, and his team is in danger of missing the playoffs this year for the first time in 19 seasons, the longest streak in North American professional sports.

Admittedly, it is extremely presumptuous to assume that a new dynasty has risen from the ashes here in , and that a Stanley Cup riot will take place within the next couple of years. I’d bet my life savings against it, in fact. However, I think it’s important to note the significant changes that have been made throughout the organization, and to address the fact that they seem to be heading on the right track towards the playoffs. Whether it’s a combination of all the factors I mentioned above or just cosmic randomness, the Habs play 5 of their remaining 10 games against teams lower than them in the standings, and it’s an excellent opportunity to prove that they can beat anybody.