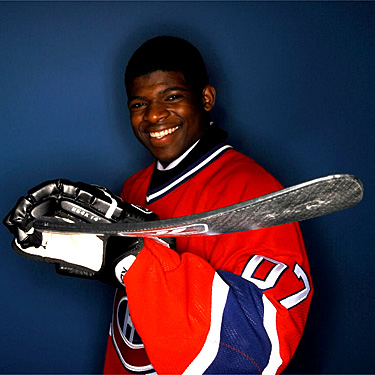 The spring 2010 listing of the Canadiens top 20 organization prospects is now up at Hockey's Future. The rankings contain several surprises and good words on Danny Kristo, Cedric Desjardins, Joonas Nattinen and Gabriel Dumont among others. Bulldogs defenseman P.K. Subban, not surprisingly, tops all prospects. Of Kristo, HF has this to say:

In 2009-10, Kristo has enjoyed no shortage of success. As a 19-year-old freshman, Kristo has been an impact player with the University of North Dakota. And on the international stage, the Edina, Minnesota native represented his country in noteworthy fashion, one of only a handful of returning members of the United States' WJC squad. He scored five goals and three assists en route to a gold medal. With the Fighting Sioux, Kristo has scored 14 goals and 20 assists in 38 games. Kristo looks comfortable, excelling at each level he plays. He has excellent speed, shoots and passes equally well, and works hard on every shift. He was named the WCHA rookie of the year.