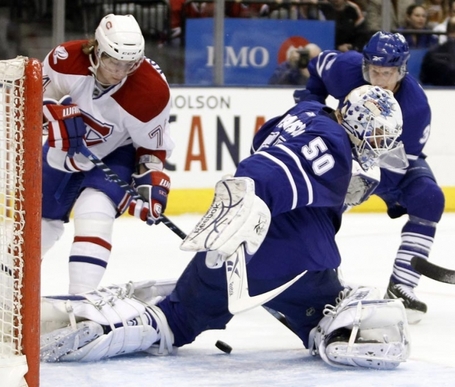 It was dreaded that after a three day layoff the Canadiens would come out flat against the Leafs on Saturday night.

At least that was what the knot in my gut all day long was telling me.

I don`t know it is part of the athletic sporting psyche to take some opponents lightly, but after a short layoff I would prefer to see the Canadiens playing a team in which they figure only their A-game will beat.

As it goes, history repeats, and the Canadiens again made the grave error of underestimating a Leafs club that is stronger than their record appears.

It is maddening to see what can often be a Saturday night classic turned into a snoozefest. Such wasn`t helped by the Canadiens failing to show for 50 minutes before turning it on in desperation.

You could get the sense early in this game that the Habs had not properly prepared mentally to face Toronto. In the first five minutes of play, two passes of the long bomb variety seemed to be the prefered tactic of the Habs offense. Plays of the sort show a certain disrespect to the opponent in my eyes. It's not a smart way to plan to win a hockey game that lasts 60 minutes.

The Canadiens should have prepared for an excruciating trench battle, but instead approached this one like it was an exhibition and not a playoff game, which should forever be the mentality when presenting themselves in Toronto or when hosting them at the Bell.

In this one, it didn`t take Toronto long to clue in on the Habs game plan, and they quickly succeeded in clogging the Canadiens passing lanes. Too bad a football statistician wasn`t present to gather pass completion numbers, as Montreal dishers were a horrid bunch on this night.

Another thing this game had in common with the pigskin game - did you see the number of times the puck acted like a football? Did they forget to freeze the little rubber buggers, or what?

Want passes behind the receiver, too far ahead, hip high and dribbling? This was the gridiron on ice for your viewing pleasure!

Perhaps it was the ineptitude and lack of cohesion between the Canadiens forwards and defensemen that caused the game to appear so lumbering. The puck seemed like a foreign object to players such as Scott Gomez, Benoit Pouliot, Andrei Kostitsyn, Glen Metropolit and the pairing of Jaroslav Spacek and Roman Hamrlik, especially. For these six, it was as though puck passing was a newly discovered science. It was painful to watch.

There are documentaries of dinosaurs sludging through quicksand....

What had been working so well for the Canadiens during their six game win streak was that units of five were in tune on the ice. In this one, there was nothing but discord (dischord?) After the Leafs found ways to jam spikes into the Habs gears, rather than fight for open space, Montreal resorted to the dump and chase game, but proceeded to deploy it without the commitment of heart, speed, legs and will.

It was a sad display of watching players go through the motions, constantly expecting and hoping some other teammate would do their work to spare them the effort and creative spark. 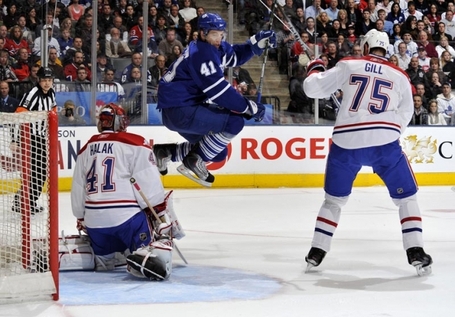 Another mind-number (as in numb-er) was the non-reaction on the part of coach Jacques Martin to how his troops were behaving. I'd say that about eight minutes in, you could see that the Habs players were in a fog of sorts. Watching the game on RDS and hearing Pierre Houde say "brouillard" a half dozen times had me hitting Google translations, because the word coming to my mind was "brume".

Despite the 1-1 score at the end of period one, I was curiously looking forward to see what adjustments Martin would make. (So, I felt like a sucker at the movies, having paid ten bucks to see Tom Cruise and Nicole Kidman in Eyes Wide Shut....)

To that enticement, there was virtually squat as enlightenment. I noticed one shift in which Mathieu Darche replaced Tom Pyatt on the Tomas Plekanec line. It seemed to spark an extended stay in Leaf territory, but two shifts later Darche was back with his regular companions. I thought I saw (or maybe heard) Sergei being an added Kostitsyn to line number two, but if it happened it did not last long enough.

And this has always been my rap against Martin as coach. Perhaps as you have, my best Martin watching came in the successive seasons as Ottawa's bench boss in which he was never able to figure a way to beat Toronto come playoff time.

By game's end, Martin can assuredly look on top of things while putting context in an analytic matter explaining a loss. His Waterloo is that he seems forever incapable of affecting or altering such an eventuality while a game is in process.

To me, that creativeness is simply known as "stir some shit up". Create a game within a game. Ruffle some feathers and hoark a loogie on some egos out there.

Offer some adversity to an unsuspecting and vulnerabe opponent for a change!

I'll just name some names, familiar to Leafs and Habs fans alike: Darcy Tucker, Gary Roberts, Tie Domi, Doug Gilmour, Shayne Corson, Claude Lemieux, Brian Skrudland, Chris Nilan - all stirrers of shit and enemies of complacency. These players were all experts in affecting a game's tempo and temperature, and instinctively knew how and when to bring teammates along with them.

So, if I'm Martin for a line change at some point on Saturday, I delegate a trio of Lapierre, Darche and Moen to create a semblence of rippling havoc against the Leafs most effective line.

Martin is too often a "roll all four regular lines" kinda coach. I'll give him tons of kudos as he seems to have finally instilled his system and five man unit methods upon the team, but I will never get over his in-game sedateness when it comes to managing lines with a game on the line.

In a six game win streak, complaints and grievances tend to fall on deaf ears. Personally, I don't find the Habs played to the height of their glorious headlines of late. By the bold type, you'd think they were world beaters! In short, they were good, but hardly great in a lot of those games. In the six games won, they were to lucky to find a few opponents on cruise control, namely the Ducks, Oilers and Lightning.

A team often personifies its coach, and what is looked for at this crucial stage in the season is pure killer instinct, among many other team psyche attributes. There are pivotal moments in games, where contests are won or lost. One such opportunity occurs when the instance of an icing call forces a team to keep five tired players on the ice.

Maybe you have noted this, and perhaps you haven't, but I have seen a good dozen opportunities roll by wherein Martin fails to use the opportunity to gain an upper hand line wise. A foe's fourth line sits out there for the taking after being hemmed in for a minute. They ice the puck, glueing themselves to the next shift.

Response? Martin matches it in kind, rolling out the Metropolit or Dominic Moore lines in counter.

I shake my brain at the opportunity wasted! 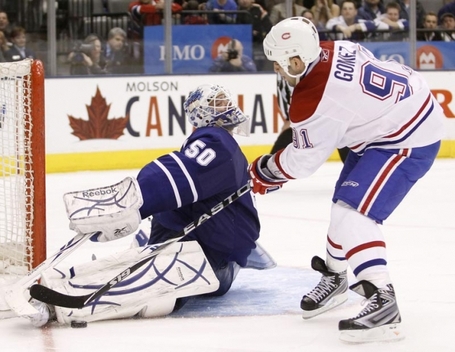 How about countering with Plekanec, Gionta and Sergei for 40 seconds, just to keep the opposite side on their toes. Isn't the brief shuffle worth the disruption?

Perhaps the coach is too conscious of individual player minute managed, but I believe in the concept of a game being on the line by the middle of the second period. Or, at any given opportune moment.

First, a bench boss has to recognize one!

Jacques Martin is a beatable coach because the poker face he wears is a muse. He has nothing - no surprises up his sleeve. His habits are like telegraphed passes, every opposing coach sees his moves coming from miles away. He makes it easy to coach against him, when all an oppenent has to worry of is his own moves. No jokers in his deck of deuce moves.

Every game has its pulse.

This one was read like a flatliner the coach was clueless in kickstarting.

Oh well, at least the Habs stole a point, caught up with Philadelphia and Ottawa in the standings, and escaped without an injury to Andrei Markov.

Props to elcapitan11 at HIO for this brief moment of amusement at Dion Phaneuf's expense.