In this feature, we’ll examine Montreal’s strengths and weaknesses as a roster going forward.  In one sense, this can be viewed as what exactly former General Manager Bob Gainey left behind for his successor, Pierre Gauthier.  In a more immediate sense, it examines what Gauthier might do at the NHL trading deadline.  This article will focus on Montreal’s defensemen.

In stark contrast to the group of centres and wingers, Montreal’s defensemen have size, limited mobility, and are generally an older group.  Perhaps that is why "pillars" is a fitting description. Not surprisingly, the team’s younger legs have stepped up this year, and a youth movement seems imminent.  But how can a youth movement be set in motion?  Six of the team’s top seven defensemen are signed through this off-season. 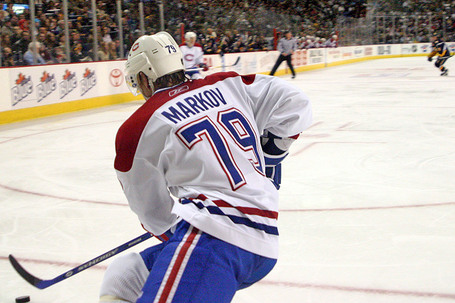 Go long, guys!  You know it's going to be the Hail Mary!  via www.mikelynaugh.com

Despite looking like he was still labouring from the injury that caused him to miss the last two games before the Olympics, Andrei Markov survived the Olympics and will again be asked to lead the Habs into the postseason.  Markov is an all-world talent, producing a lot of points (mainly on the power play) while facing the opposition’s top forwards night in, night out.  His importance to the team is such that fans are already fretting about the possibility he does not resign with the team in the summer of 2011.  Markov, who will be 33 at that point and has played his entire career in Montreal, seems like a likely candidate to skate on Montreal’s top defensive pair for a few more years into the future. 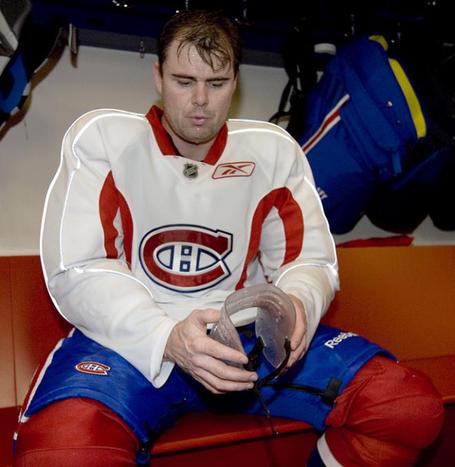 And how exactly does this help cover my bald spot?  via habsinsideout.com

Two veterans who may not have as long as Markov are Roman Hamrlik and Jaroslav Spacek.  Both come with substantial contracts, and both are on the wrong side of 35, but both have shown the ability to play quality minutes in a supporting role, even taking on added responsibility this year when Andrei Markov went down.  The case to trade one of them is simple:  to clear cap room to keep the team’s younger forwards and goaltenders in a Habs jersey.  That being said, with the team’s immediate goal to make the playoffs, it seems highly doubtful either of them would be moved while they play such a lead role for this current team.

Josh Gorges, meanwhile, has continued to grow under Jacques Martin’s tutelage.  He provides over 21 minutes of quality defensive hockey, somehow managing to stay healthy despite always taking hits to make plays, blocking shots and trying to keep opposing forwards out of the goal crease.  His play is in sharp contrast to Paul Mara, a veteran who was brought in to stabilize the bottom pairing and potentially contribute on the power play.  Mara, who was thankfully only signed to a one year deal, will be hard pressed to crack a fully healthy Montreal lineup down the stretch. 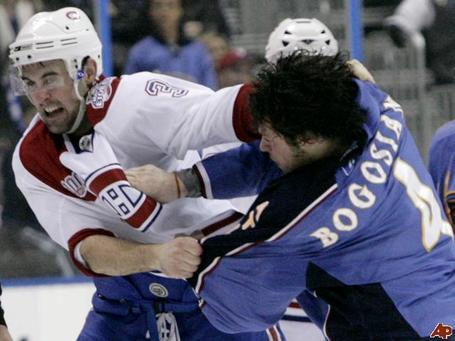 Look Zach, I was returning that purse to your mom, I swear!  via nimg.sulekha.com

Hal Gill and Ryan O’Byrne play very different games, despite being of similar size.  Gill is an oddity:  a PK specialist who has been known to struggle 5 on 5.  He uses his 6’7" frame more for his long reach than physical play, although he can still outmuscle players along the boards.  O’Byrne has performed reasonably well, especially recently when paired with Andrei Markov.   He is the team’s top physical defenseman, and could find a niche role on the team going forward.

Marc-André Bergeron was an emergency signing who dominated the power play in Markov’s absence, but has been limited to playing forward for the most part once the regular d-men got healthy.  While his PP production has been valuable, his 5 on 5 play has been awful, be it as a forward or defenseman. 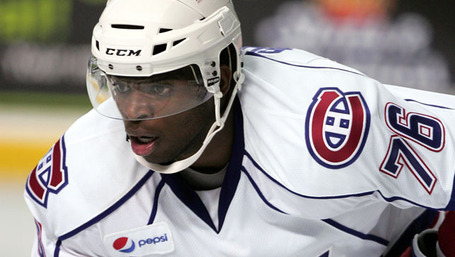 There’s a lot of reason to be excited about P.K. Subban’s potential, and fans got a taste of that when he was called up in an emergency situation for the final two games before the Olympics.  He would be the Canadiens’ primary rushing defenseman right now, as even Andrei Markov prefers to pass off the puck before leaving his own defensive zone.  His strong presence on the PP would also help alleviate for the loss of Bergeron to unrestricted free agency.  If Hamrlik or Spacek are traded, Subban will certainly be the beneficiary next season.

Subban is not alone, however.  Mathieu Carle seems likely to crack the Canadiens’ roster next season, though season ending shoulder surgery may set him back.  He was Hamilton’s top defenseman before the injury, and he didn’t look out of his depth at the NHL level in his brief time there.  Yannick Weber has had an interesting sophomore season, as he has been asked to refine his defensive game.  His offensive numbers seem to have suffered as a result, and he will likely spend another season in Hamilton hoping to put it all together. 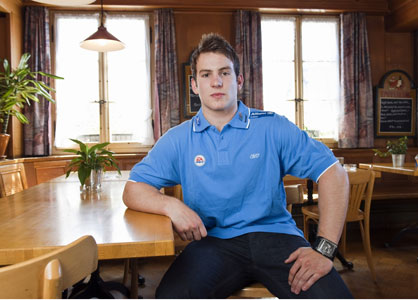 When Yannick Weber retires from hockey, he plans on becoming a world famous botanist.  via www.tsr.ch

What is interesting about Montreal’s D corps is not just their age, but the fact that 7 of the team’s 8 NHL d-men shoot left-handed.  The team’s top three prospects at D, however, all shoot right-handed and seem ready to step in almost immediately.  Clearly, the Habs have the makings of a good defensive unit, but have to move some bodies out of the way and suffer through some growing pains to accomplish this.

An interesting bargaining chip for Pierre Gauthier lies in the amateur ranks.  David Fischer, the team’s 2006 first rounder, has underperformed at the NCAA level and has provided little incentive to being signed by the Canadiens.  As a result, he can be treated as being a 50th overall draft pick, or a mid-second rounder.  The Canadiens would get that pick in compensation if they did not sign him this summer, so despite the Dominic Moore trade, the Canadiens are still in possession of a 2011 2nd rounder.