Pierre Gauthier - An Interesting Track Record In Ottawa and Anaheim

Share All sharing options for: Pierre Gauthier - An Interesting Track Record In Ottawa and Anaheim 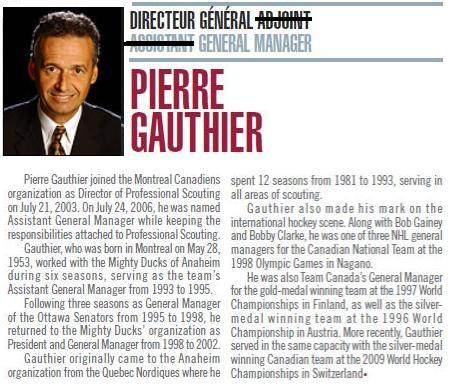 While many Canadiens fans are familiar with new GM Pierre Gauthier, few may be up to speed on his career path leading him to his new role. Back on February 8, when Gauthier assumed the torch from Bob Gainey's failing hand, part of the Canadiens official site's bio and promo on Gauthier read like this:

"With over 30 years of experience under his belt, Gauthier has drafted, signed and developed some of the best players in recent memory. He got his feet wet in the NHL as the head of pro scouting with the Quebec Nordiques in 1981. During his 12 years with the franchise, Gauthier drafted the likes of Joe Sakic, Eric Lindros and Mats Sundin."

RL Note: Since the appearance of this article, the Canadiens official site has contacted Pierre Gauthier to verify that he in fact was not the Nordiques head of pro scouting, but in fact its director of amateur scouting. The article has been corrected.

The fact of the matter is, Gauther was never the Nordiques' head scout, per se. Martin Madden, who later worked for the Canadiens in the Rejean Houle era, headed the Nordiques scouting department at that time. Other scouts who worked for the Nordiques during those years included names such as Bob Mancini, Bill Underwood, Orval Tessier, Simon Nolet, Frank Jay, Don Paarup, Sheldon Ferguson, Guy Lafrance, Don Boyd, Yvon Gendron and owner and GM Maurice Filion himself. Gauthier, a highly respected scout even then, was but one of many working in the Nordiques scouting department at the time. In looking back, nowhere have I seen "head scout" or "director of pro scouting" attached to his Nordiques resume.

Difficult not to imagine somewhat, Gauthier not wanting to be tarnished by the Nordiques' stains of that era. It's hard to forget the Nordiques of that time blatantly tanking to get three successive number one picks. Aside from that, the Nords weren't all that astute, selecting first round duds as Wade Belak, Jeff Kealty, Todd Warriner, Daniel Dore, Curtis Leschyshyn, Ken McRae, David Latta, Trevor Steinberg, and Bryan Fogarty. In fact, in the 1987 draft in which Fogarty was chosen 9th overall, the Nords then set their hopes on Stephane Quintal, who went 14th to Boston. Filion then expressed disappointment at not grabbing the Quebec league blueliner, saying in passing that they would in turn settle for Sakic.

In sum, a director of amateur scouting as Gauthier was in his final tenure in Quebec, is responsible for the work of his bird dogs. He would of course had put in the miles himself, seeing many of the top picks in person, and permorming much of the homework in their regard himself. Drafting will always be what it is, an inexact science.

Nonetheless, what Gauthier did, he apparently did well, but let's not so easily credit him alone with the brilliance of drafting Sakic, Lindros, Sundin and Owen Nolan. He was hired away from the Nordiques by Anaheim, cementing his reputation there before moving onto Ottawa and back to Anaheim again. He is often pointed to for the Senators turnaround, but it is conviently forgotten that Ottawa bagged five top 5 picks before Gauthier came on board. His work with Anaheim, although he was fired one year before the team surprisingly reached the Stanley Cup final in 2003, might be the most impressive thing on his resume.

An expansion club, the Mighty Ducks had five top ten picks by Gauthier's arrival, but only Paul Kariya truly packed a punch. In three short years, Gauthier picked the club to pieces, discarting spare parts at a fanatical pace, often turning them over for better players. He did have a few glaring misteps, but hindsight shows that he often knew the players he was acquiring better than the GM's who were trading them.

Needless to say, Gauthier's hockey acumen and bird dog reputation will be put to the test in Montreal, as the team has no such stockpile of past draft picks to build upon or barter with. This will mark the first time that Gauthier assumes the reigns of a club already in playoff standing. To his credit, Gauthier's stamp is already well imprinted on the Canadiens from having been at Gainey's side for six seasons. Much has been made of the Habs hiring a francophone manager rather than the best one of for the job. This time, it is the english factions getting their shorts in a needless knot. It's doubtful there was a candidate available that knows the inner details of the Canadiens system of players better than Gauthier. Fans often preach of transition through the timely passing of players; this is the managerial version.

What follows is a disecting of Pierre Gauthier's era's as GM in Ottawa and Anaheim. As a warning, there are few grand and bold strokes at work, so what you will be paying attention to is the subtle. Gauthier is known in the trade as a micro-manager, with detail being one of his obsessives. Heck, in Ottawa, there is even the tale of his cookie counting at media briefs!

Gauthier's good moves are in bold, his bumbles in italics. The remainder are not to be considered insignificant, but merely lesser deals. Free agent losses not inclusive in the final tally of good versus bad moves.

Pierre Gauthier was hired as GM of Ottawa on December 11, 1995, 27 games into the team's season. The Senators had been spinning their wheels as badly as they had been during the first three seasons of their existence, and at the time owned a 7-19-1 record. Rick Bowness had started the season as coach, and was fired by then GM Randy Sexton after Game 19 with a record of 6 wins and 13 losses. His replacement, Dave Allison, would go winless in six before guide the club to a win on December 7. Four days later, Gauthier would take over as manager of the team.

Allison's teams would endure an eight game losing streak before winning another on December 27 in Buffalo. From there, another nine game skid would ensue, at which time Gauthier replaced Allison with Colorado Avalanche assistant coach Jacques Martin (January 24, 1996), who would steer the Senators to a 10-24-4 record in the final 38 games. Despite the woeful record, the 41 points (18-59-5) was a four year franchise high, yet the club still had the first pick overall in the June Entry Draft, and chose defenseman Chris Philipps, the team's third number one overall choice in four seasons.

From December 11th and on, when Gauthier took over, these were the players who dressed for the Senators that first season.

Free agents signed and lost: None acquired by Gauthier during the 1995-96 campaign (December to May)

While with Ottawa, Gauthier presided over three NHL Entry Drafts, with seventeen of twenty-four picks eventually reaching the NHL for at least one game.

On August 6, 1998, Gauthier shocked Ottawa fans when it was announced that he had accepted the position of president (and later GM) of the Mighty Ducks of Anaheim. The team he would be taking the helm of had just finished sixth in the Pacific Division with a record of 26-43-13, good for 65 points under coach Pierre Page. One of the reasons for Anaheim's dip in play was attributed to the loss of star player Paul Kariya, who had missed 60 games suffering from the effects of a consussion.

Gauthier replaced Page with Craig Hartsburg and the Mighty Ducks improved by 18 points, finishing the next two season with 83 points. While the club made the post season in 1998-99, they would not qualify for the playoffs again under Gauthier's reign.

The team Gauthier inherited from Page had employed 42 players and 3 goaltenders during the 1997-98 season. It was a scenario he was familar with from his first season with Ottawa. During the course of the 1997-98 season, the Mighty Ducks had parted ways with the following 14 players:

Upon being named GM of the team on August 6, 1998, Gauthier's roster was as follows:

During his time in Anaheim, Gauthier presided over three NHL Entry Drafts, with thirteen of twenty-four picks eventually reaching the NHL for at least one game.