In this feature, we’ll examine Montreal’s strengths and weaknesses as a roster going forward.  In one sense, this can be viewed as what exactly former General Manager Bob Gainey left behind for his successor, Pierre Gauthier.  In a more immediate sense, it examines what Gauthier might do at the NHL trading deadline. This article will focus on Montreal’s wingers, both left and right.Click here to read about the team’s centre depth.;

On any given night, you can dress eight different wingers, most of any position. But even with that, it’s hard to believe that the Montreal Canadiens have had to dress fifteen natural wingers so far this season, not counting the centres and defensemen who have been used as wingers at various points of the season. Only one winger has dressed for every game so far, and that’s Travis Moen.  No position has seen less stability, so it’s a good idea to step back and see how they’ve been used so far, and to what degree of success. 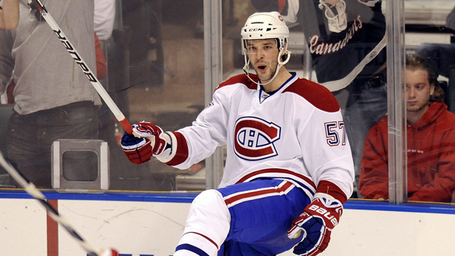 Montreal relies heavy on their wingers to put the puck in the net, and for good reason. Four of their most prolific shooters play on the team’s top two lines, scoring with high efficiency.  Benoit Pouliot’s 17.8% shoot percentage has him ranked ninth in the entire league, even ahead of the player he was traded for, Guillaume Latendresse (who has a 16.8% SPCT). It’s actually a pretty strong group, led by Mike Cammalleri’s strong numbers at even strength.  Brian Gionta actually leads all Montreal forwards in average icetime, despite being usually partnered with Scott Gomez, who is the team’s second centreman. 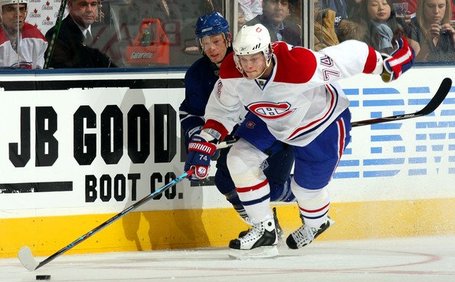 Youth has been served on the wings, with Georges Laraque mercifully phased out and Sergei Kostitsyn finding his way out of Jacques Martin’s doghouse.  The younger Kostitsyn brother has actually been given the toughest minutes of all the Canadiens’ forwards, and has proven worthy of the task. With his name continually mentioned in trade rumours, it’s noteworthy how much trust Martin has placed in the young forward since his callup.

The group predictably thins out after the third pairing of Moen – S. Kostitsyn. Journeyman Mathieu Darche currently occupies the next spot in the depth chart, mainly because the team would rather have Max Pacioretty develop in the minors. Pacioretty’s numbers don’t look awful for a depth winger, but more is expected of him in the future, and since he couldn’t crack the top three lines, he’ll have to try again to crack the team in September. Matt D’Agostini has shown no ability to hold down a roster spot of any kind this year, while callups like Ryan White and Brock Trotter have shown flashes of effectiveness, but not enough to stick with the club. Indeed, the numbers show that while White continues to get opportunities, he hasn’t added a whole lot to the team to date.

Players playing out of position often occupy one of the wing positions on the fourth line, and for the remainder of the season expect to see the likes of Max Lapierre and Marc-Andre Bergeron get starts over the likes of D’Agostini and Darche. 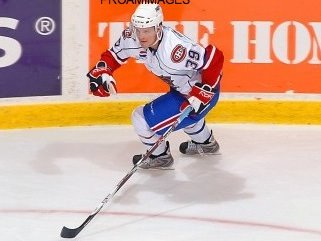 We’re definitely familiar with most of the prominent Hamilton Bulldogs wingers this year.  Brock Trotter leads the Bulldogs offensively, and offers a tantalizing package for next season in Montreal:  Goal scoring ability, speed, and a right handed shot. With Glen Metropolit becoming an unrestricted free agent, Trotter could find an opening on the power play if he can crack the roster in 2010-11. Ryan White’s gritty play has earned him the respect of the coaching staff, but his contract situation could work against him next year, as he will again not have any waiver restrictions.  At the very least, White appears to have pushed Gregory Stewart way down the team’s depth chart. 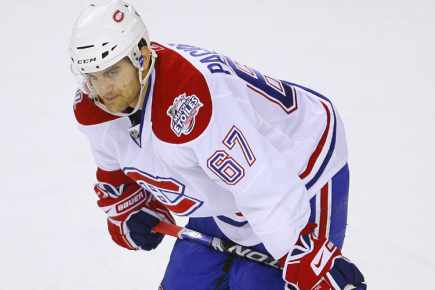 Pacioretty: "I can't believe they think I'm worse than D'Agostini" via www.cyberpresse.ca

There is a bit more size on Montreal’s wings than down the middle, but there seems to be a lack of concern about size at forward in general. However, the future looks fairly strong with the likes of Benoit Pouliot, the Kostitsyn brothers, and Max Pacioretty coming up. If the Canadiens are to trade any young assets, a winger might be what they offer up.; Prospects in the amateur ranks include Danny Kristo, Steve Quailer and Alexander Avtsyn, none of who are expected to turn pro next year.

If the team opts to deal some of their younger assets at wing, look for the team to target some low maintenance types to fill out the bottom spots.  Travis Moen could soon become the norm in the system, not the exception.  Adding more right-handed shots has to be considered a priority as well, as only Gionta has proven to be both right-handed and reliable this season.