Share All sharing options for: The Habs First Goaltending Controversy? 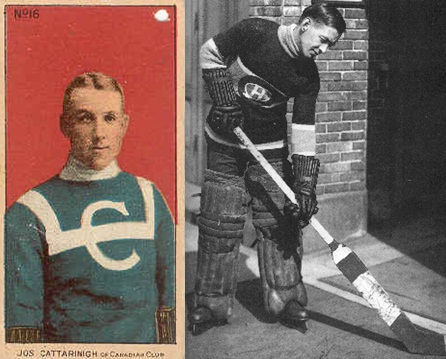 Imagine, the Montreal Canadiens endured their very first ever goaltending controversy a whole four game into their existence!

One season before Georges Vezina arrived to settle matters between the pipes, Les Canadiens, as they were then known in 1910, had entrusted their goaltending to one Jos Cattarinich. After the Canadiens and Cattarinich had won an opening contest which ultimately did not count in the standings by a 7-6 score, the lost the following three matches by scores of 9-4, 6-4 and 8-4.

Cattarinich, an avid sportsman in Montreal circles, had never played goal in hockey prior to this. He had mainly tended goal in Lacrosse for the Montreal National where he was pretty decent. Cattarinich likely got the job due to his long friendship with Canadiens' manager and star defenseman Jack Laviolette. It was Laviolette actually, who earned the Canadiens first win on January 5, 1910 against Cobalt, coming on in relief of Cattarinich.

After surrendering 29 goals in four games, Cattarinich was history, almost!

Upon his release by the team, Cattarinich helped manage and finance the club and eventually bought it along with Leo Dandurand and Leo Letourneau in 1921.

To solve (?) their goaltending woes, Les Canadiens turned to Teddy Groulx, who did not fare much better. In his first game with Montreal, Groulx was shellacked 8-3 by the cross - town rival Shamrocks. Groulx won his next game (9-5) against the lowly Haileybury Comets before running off six straight losses in which he surrendered a whopping sixty goals. 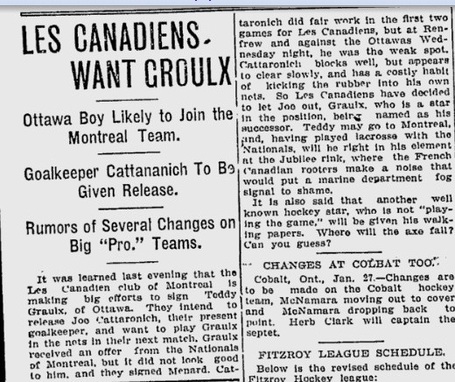 On March 11, 1910, in the final game of the 1909-10 season, Les Canadiens finally won a second game, defeating the Shamrocks 5-4 in overtime. Groulx had been given the heave by this time, and it was the Montreal Nationals former goalie Patrick Larochelle in goal. Curiously, he was nowhere in sight by game's end, having been thrown out after arguing the Shamrock's fourth. When the game proceded to overtime and he was allowed back in according to rules, manager Laviolette was unable to locate him.

Sometime prior to that final first season game, Cattarinich made amends, big time. The Canadiens had ventured to Chicoutimi for a game against a local seniors team and again suffered a double digit, humiliating defeat. Montreal did not have Newsy Lalonde, who had recently been released to join Renfrew, but still administered a goal peppering at the Chicoutimi end. Their goaltending withstood the barrage, allowing only four goals. The following season, Cattarinich made sure to sign him.

Thanks to Georges Vezina, the Canadiens goal crease would be comparativelt calm the next fifteen seasons.