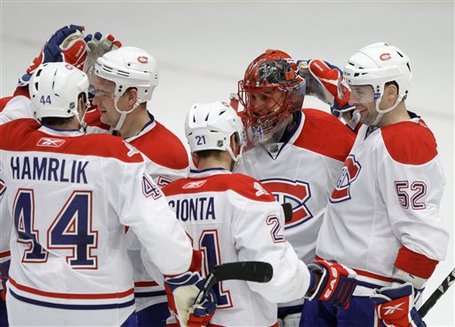 Notice something, somewhat obvious and delightful, when speaking to fellow Habs fans these days?

When talking about Les Canadiens to friends and fans recently, I notice the team is rarely termed "they" anymore - as in "they aren't playing like I'd hoped" or "I don't know about them Habs anymore.'

Now I hear things like "we're on a roll" and "it's looking good for us making the playoffs!"

Today, I even caught myself doing it - something I try to abstain from - when I said "all hopes are permitted since we've won five in the row."

Well now, with tonight's win over the Rangers, "we're" at six!

Ha! I like that "we" thing - it makes me smile. (Like I or you have anything to do with the team we cheer for, other than supporting them, which we don't always do, or do in our own particular way).

So allow me, if you will, to continue in the personal pronoun mode, as our team is discussed along with all the decisions and moves that have been going right of late and translating into wins.

The New York Rangers were advertised in this game as being a desperate team fighting for a playoff spot. In their own building, an unfriendly one at that, they were dominated by the Canadiens, in a game in which the score does not at all reflect the game itself.

On a purely statistical level, Montreal outshot NewYork 35 to 20 and won 57% of the faceoffs at Madison Square. The hit margin of 27 to 24 for the Blueshirts states that Montreal were not physically outduelled in the Ranger's' home rink. Our Canadiens owned a slight edge in blocked shots and takeaways and committed only one turnover (WTF?) to the Rangers' six.

Going further, the Habs fired wide but five times, against 15 Rangers shots going MIA, which testifies perhaps that Montreal's chances weren't as rushed as those of the Blueshirts. 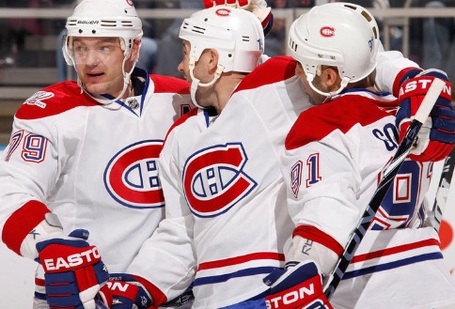 While I do not believe that there is such a thing as a perfect hockey game, this contest marked one of the closest the Canadiens have come this season, especially in a road game.

I used the word "dominant" earlier, perhaps a better term is to say the Canadiens "controlled" the game from start to finish.

I could also infer "puck possession" in attributing the stellar play, but I think that what the Canadiens are doing best falls under "positional poise and awareness," as Montreal more often owned the play rather than the puck itself.

As you may have sensed, this is all leading to appreciation for coach Jacques Martin and his system, which we are finally getting an understanding of, seeing it fully at work. Remember that June 2009 day when then GM Gainey proposed that Martin coached teams that were hard to play against?

Ask the Rangers if the Canadiens were a tough opponent in this one? 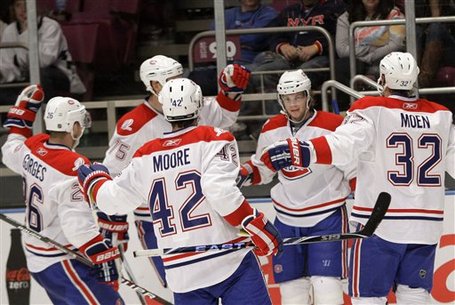 It's been hard at times this season, I'll admit, to like Martin and be convinced he was on the right path. Perhaps his statements about seeing the real Canadiens gel in twenty, then fourty games, and finally a definite maybe by season's end, put us all of off.

We've also not appreciated how several players were handled within the contraints of his system, but we've begun to be a forgiving bunch. For now.

We're liking things because everything seems to coming together at once and working as it should within the team scheme. The Canadiens are looking organized for a change, at long last. It's been since the end of the 2007-08 season, since our team has been looking this together. A relief.

So why, we are entitled to ask, haven't the Canadiens been able to get it in gear until now?

I despise the word "excuses." I consider it a blaming term for the less intelligent. There are, however, several good and understandable "reasons" as to why the Canadiens have spit and sputtered until now, all plain as the light of day.

Sometimes it takes seeing things work as they should to understand exactly what is wrong when things function badly.

Injuries (a reason, not an excuse) cause team dysfunction. The absence of a key player or of many players along the way creates all kinds of role disorientation on a team.

Players on a team are like strings on a guitar - one note out of tune makes the whole tempo goes foul. Players are asked to perform unsuitable roles with unsuitable partners, doing things they are ill equiped for, for more or less minutes per game.

That in itself in hockey is not all that uncommon. All NHL teams deal with as much all season long. But as the Canadiens themselves were very much a reconstituted team from the get-go, injuries really threw them for a loop. It took a toll. 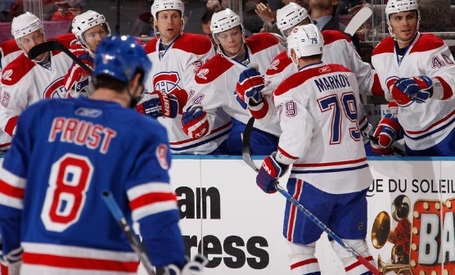 Starting at game one, defensive stalwart and offensive quarterback Andrei Markov was gone for half the season.

Brian Gionta, leading the team in goals at the time, missed 21 games.

Andrei Kostitsyn, just as he caught fire was sidelined for 23 games.

Marc-Andre Bergeron, crucial to the PP has missed more.

Mike Cammalleri will have missed 15 by the time he returns, hopefully this Saturday.

So did Jaroslav Spacek, who is almost a different player since the Olympic games allowed him to rest up and recoup energy.

Roman Hamrlik and Ryan O' Byrne have missed a half dozen games each with varying bobos.

As stated, it all takes an undeniable toll.

Most teams, having suffering as much, would not likely be sitting sixth in their division at this point in the season, had a whole lot of things not been done right by both the players and the folks in charge.

It's time to own up now, and Bob Gainey, who left the GM job with more than one poisoned dart in his back, and replacement Pierre Gauthier, have done a bang up job keeping this team on the skids. Coach Martin also appears to have not deviated from his vision of the team, despite the numerous forks thrown into his road. All three deserve merit and mea culpas.

Lo and behold, there is direction here on this team after all, now that the club seems poised to crawl from the big muddy. 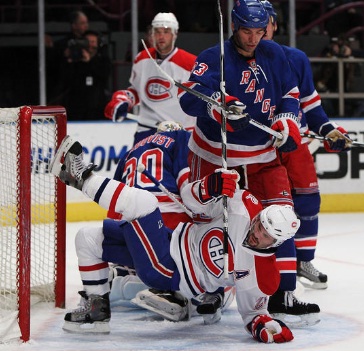 It can be evidenced now, with the return of mostly all injured players, the newly observed committment shown by five man units on the ice, the clearer identity of lines and their better defined job detail. All of this and more, has gone a long ways towards helping the Canadiens accomplish what hadn't been truly been capable of, or was fairly possible, for 65 games.

The Gainey - Gauthier - Martin trio may have tried fan's patience, but many astute moves were theirs.

-- Playing without Andrei Markov for 37 games was akin to playing on a crutch for a team so used to counting on him. Within days of Markov's injury, Marc-Andre Bergeron (Yours truly was skeptical) was signed, assigned to Hamilton for conditioning, and called up. It cost the Canadiens nothing, but his impact, especially on the powerplay, was almost immediate. Consider where the Habs would be without Bergeron's contribution.

-- Guillaume Latendresse was faultering under Martin. The reasons are less important today. Talented but confused, Montreal exchanged prospect problems with Minnesota, (yours truly was pissed), and it paid off at both ends. It was a risky trade, but in the end, a deal of the best kind. Benoit Pouliot arrived in Montreal, welcomed by all Latendresese doubters, and proceded to become the team's third most impactful sniper not named Cammelleri or Andrei Kostitsyn.

-- Sergei Kostitsyn had all the makings of a team problem child. After a disillusioned season carried over into training camp, the Canadiens reacted at the first disgression, sending him to Hamilton (yours truly disagreed) for some head cleansing at the Guy Boucher rinse wash. Sergei grew up, lo and behold, his contribution now a vital part of the Canadiens success of late.

-- The subtraction of the Georges Laraque distraction (yours truly was a cheerleader) has hardly hurt. A fart in the wind now, the move solidified team unity.

-- Replacing "not ready for prime time players Matt D'Agostini and Max Pacioretty with the veteran presences of Dominic Moore and Mathieu Darche, were timely and significant, an d have helped reinforce team depth at the most important time of the season.

-- Lastly, an unproclamated resolving of the number one goaltender non-issue, in which the Habs did not buckle and send a goaltender at the trade deadline, was both wise and visionary. Until the Canadiens know as much of Jaroslav Halak that they do of Carey Price come playoff time, a decison cannot be made in haste. A better resolve will come when more evidence has been presented. (Yours truly sits on the fence, like one who has two gorgeous chicks who put out and refuses to choose!)

-- Honourable mention to Via Rail and Air Canada, in the callup and return of as many as 17 Hamilton Bulldogs in this time. Kudos to whoever is supplying the AAA batteries for the Habs salary cap guru who's calculations have helped make the myriad of callups plausible on a weekly basis.

All of the above is testament to the fact the Canadiens organization has vision and more insight than we often given them credit for. They know gallons more than we.

With a playoff spot looking better and more assured every day, can we Habs' fans be allowed to think and dream beyond?

Let's not go that far, so soon.

But there are several Cup contenders, some great regular season teams, that own some very questionable goaltending.

That is all I will expound upon one playoff credo.

Another has to do with teams who get hot at this time of year, as the playoffs approach.

For the first time this season, I am truly excited and over my head about our team.

What took 'em so damn long!