Moore's Dividends Have Had Their Say In Habs Winning Streak

Share All sharing options for: Moore's Dividends Have Had Their Say In Habs Winning Streak 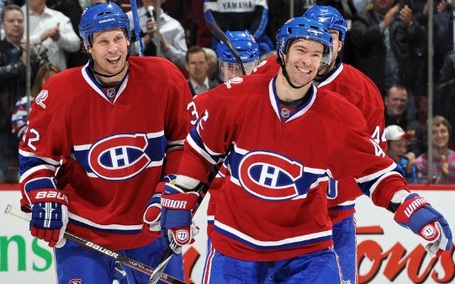 Alphabetically in Canadiens history, Dominic Moore's surname sits between greats Dickie Moore and Howie Morenz, and that would be where any comparision would slam into a wall. No one is about to confuse the Habs latest acquisition with legends of Canadiens' lore. In time he may have much less in common with alphabetical buddies such as Pete Morin or Dave Morrisette, unless time proves he was simply passing through the Canadiens organization.

Count me in as one who hopes to see more Moore next season, as I find him to be the perfect addition for this team down the middle.

For the time being though, the pre-trade deadline pickup of Moore looks to have been one very asute move by new Canadiens GM Pierre Gauthier, who sought to improve the Habs depth wise rather than with a top end acquisition. Moore, a centerman with a savvy knack on faceoffs, has solidified the team's third line, which gains in confidence with each passing game. 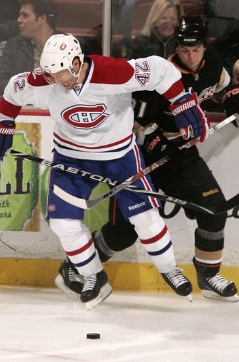 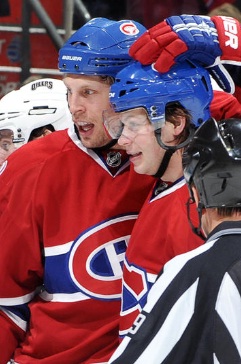 In nine games thus far with Montreal, Moore has potted a pair of goals to go along with seven assists, two coming in Saturday's crucial game against the Bruins. Typical of the player, none of his goals or assists have been of the highlight reel variety, most being the workmanlike efforts of an on the ball and persistent pest.

Moore is the kind of relentless pursuant opponants feel breathing down their necks. Anaheim's Ryan Getlaf could attest to this. Late in the March 7 contest against the Ducks, Getlaf slipped up on a loose puck in the Duck's corner, and before he knew it, Moore had swept in, with one motion feeding the abandonned disc to Brian Gionta, who made no mistake in beating Jonas Hiller. Moore's heads up play keyed the Canadiens comeback.

With out that sort of alertness by Moore, late in a game seemingly lost, the Canadiens are not riding a five game winning streak presently.

Moore's presence on the ice has best been felt by linemates Travis Moen and Sergei Kostitsyn, who is playing his best hockey of the season with three goals in his last two games. Moen ended a 33 game drought against Edmonton, alongside Moore, bringing his season total to 8 goals. Curiously, in many of the plays in which his linemates shine, Moore is out of sight, having done the invisable work away from the plays that often leads to goals at opposite sides and ends.

With speed and tenacity, Moore's best assets, he enables transition from within his own end, often by slowing up opposing centers on the turnaround. If we are seeing Kostitsyn flying up high, it is because Moore is handling the work down low. 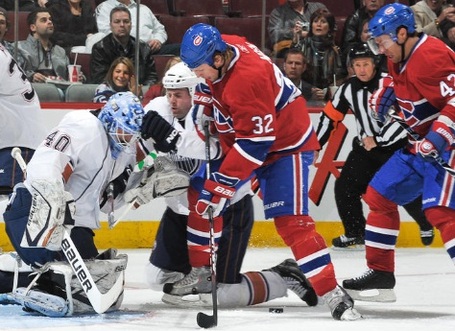 Another benefit of the addition of Moore had been the assigning of proper minutes to the remainder of his third and fourth line compatriots. Against Boston on Saturday, Moore played 13:13, Kostitsyn 11:38 and Moen 13:30. The fourth line of Glen Metropolit, Maxim Lapierre and Mathieu Darche all fell into the 11 minute range.

As the playoffs near, the minute distribution becomes a key factor in how coaches can successfully manage their bench. With solidified and defined third and fourth line roles, Habs coach Jacques Martin has more interesting options at hand, while less cold bodies translates into a warmer team on the whole.

It is something everyone concerned can get used to.