Flashback: From the Olympics to the Habs: "The Coming of Chris"

Share All sharing options for: Flashback: From the Olympics to the Habs: "The Coming of Chris" 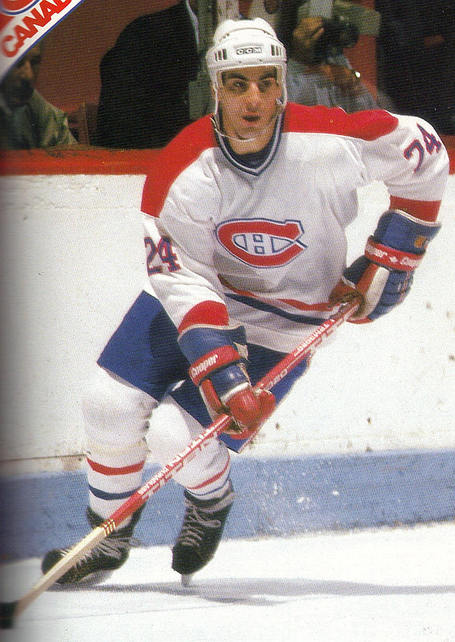 I’m sure just about everybody will agree that the participation of NHL players in the Olympics is a great thing. But there was an era, different than today, when Canadian and United States Olympic hockey teams included many young prospects that would soon join the ranks of NHL teams after the games were done. In the case of one future Montreal Canadiens Hall of Famer in 1984, this scenario provides for an interesting flashback and some good story-telling.

Especially in the 1980’s, some of these young players made an impact with their teams in the stretch drive and the playoffs. Many might recall defenseman Ken Morrow who was part of the Miracle On Ice United States Olympic hockey team that won gold in the 1980 Lake Placid Games and then went on to win the Stanley Cup that spring with the New York Islanders. That same year, many Canadiens fans (myself included) might remember that a certain Steve Christoff, of that same US team, joined the Minnesota North Stars and contributed to the Habs playoff elimination that spring. Another example is Canadian goaltender Sean Burke, who, after the 1988 Calgary Olympics, guided the New Jersey Devils to their first playoff birth and to a run to the semi-finals.

The 1984 Sarajevo Winter Olympics in Yugoslavia featured another group of NHL prospects. For one, the defending Stanley Cup champion New York Islanders were awaiting the arrival of two of their high draft picks, American Pat Lafontaine and Canadian Pat Flatley. Meanwhile, the Montreal Canadiens and their fans had their eyes on U.S. defenseman Chris Chelios.

After playing junior hockey in Moose Jaw, Saskatchewan, the Chicago native was the Canadiens fifth pick, 40th overall, in the 1981 draft. He followed that with two strong years at the University of Wisconsin where he helped his team win a national championship in 1983. That year, Chelios postponed turning pro and committed to the U.S. National team for whom he would play a series of exhibition games to prepare for the ’84 Sarajevo Olympics.

There was no miracle for the 1984 U.S. Olympic team in Sarajevo as it finished a disappointing seventh but Chelios, along with Lafontaine, were among the bright lights for the team.

The arrival of the 22 year-old with the Canadiens was highly anticipated as indicated by The Montreal Gazette’s Red Fisher in a February 16 1984 article, a week prior to the defenseman joining the team.

The fanfare associated with the one-time University of Wisconsin all-star has been so great, his arrival in the NHL is generally regarded as The Coming of Chris. Immediately, - and without any magic words – Chelios becomes a regular member of the roster even though he has never played a game in the NHL.

First-year General manager Serge Savard and Club President Ronald Corey had travelled to Sarajevo during the Olympics to conclude a deal with Chelios and also hoping to obtain the services of another draft pick, Soviet goaltender Vladislav Tretiak.

The U.S. team played their final game at the Olympics on February 17 th. Chelios arrived in Montreal on February 22 where he signed a three year contract. The next day, The Montreal Gazette featured a big photo of Chelios being welcomed by Canadiens coach Bob Berry. Here is that entire page view. Clicking on the article pages will enlargen them for easier viewing. 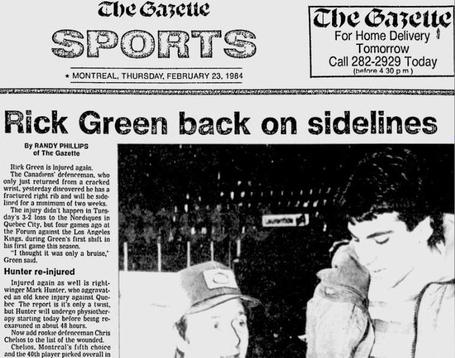 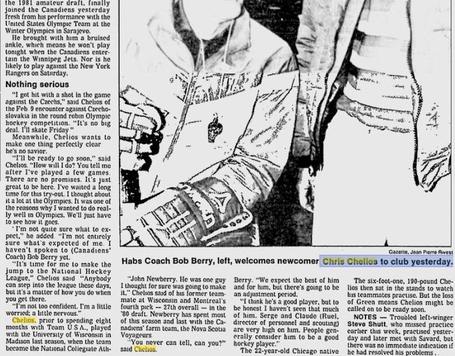 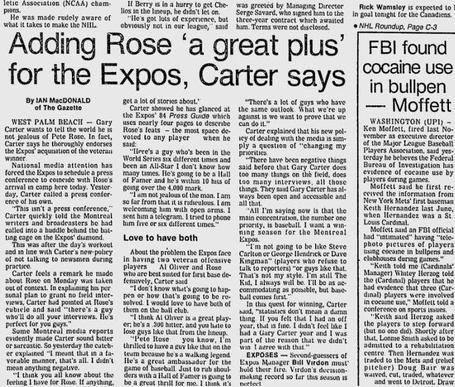 Suffering from a bruised ankle after he got hit by a shot during the Olympic tournament, Chelios could not play right away for the Habs. But, he who had only been to Montreal once in his life for a pre-olympic game, quickly found out about the expectations regarding the Canadiens. Two days after his arrival, Savard fired coach Berry because of the team’s poor results and replaced him with then assistant Jacques Lemaire.

Chelios finally made his debut with the Habs on March 8th at the Forum as the Canadiens beat the Hartford Whalers 3-2. Right away, he impressed, showing good passing abilities and a hard shot. Thanks to the mentoring of Larry Robinson and Craig Ludwig, he improved steadily. He collected two assists in the last 12 games of the season.

But the Habs struggled during that period with four wins and eight losses, including six in a row to end the season. For the first time since the 1950-51, the Canadiens finished the season below .500 but still earned a playoff spot. In the first round, they were huge underdogs in a best-of-five series against the Boston Bruins, having finisthed 29 points behind their rival who had clinched the Adams division title with 104 points.

In a move that ressembled Ken Dryden’s playoff debut in 1971, coach Lemaire chose to start rookie goalie Steve Penney, who had been called up a few weeks earlier from the Nova Scotia Voyageurs and who had played just a few regular season games. The move paved off as Penney was spectacular. Chelios scored the Habs first goal of the series, on a power play, his first NHL goal, as the Canadiens took the first game 2-1. They followed that with a 3-1 win the next day and swept the Bruins with 5-0 shutout in Montreal.

In the following Battle of Quebec, the Canadiens continued their winning ways, downing the Nordiques in six-games (the clincher being the famous Good Friday brawl game) to advance to the semi-finals against the 4-time Stanley cup champions, New York Islanders, the team of former olympians Lafontaine and Flatley. While Lafontine had been a teammate with the U.S. Olympic team, Flatley had been one at the University of Wisconsin. After winning the first two games at the Forum, the Canadiens lost the next four to the Islanders. But, so unexepected was that playoff run that it was even more satisfying and it restored pride and hope to the fans.

Penney’s heroics and Lemaire’s defensive system were certainly two major factors in the Habs success that spring but Chelios was a dominant force who played with the poise of a veteran in moving the puck out of his zone and acting as a quarterback on the power play. He finished second to Mats Naslund in Canadiens playoff scoring with ten points (one goal and nine assists).

It was a great start to what would become a long and successful career. The following season he was the Calder Trophy runner-up to Mario Lemieux before winning his first Stanley cup the season after that. As a Hab, he won the first (88-89) of his three Norris trophies and earned the first of five first-team all star berths. At the start of the 89-90 season, Chelios was voted Canadiens co-captain with Guy Carbonneau to replace retired Bob Gainey. Then, during the summer of 1990, he was traded to Chicago for Denis Savard, apparently because of his off-ice troubles. His career included many other international competitions: three Canada Cups, Rendez-Vous 87, the World Cup and three more Olympic games.

As part of this flashback, there are two videos below. The first one shows Chelios and a few other notable players from the U.S. and Canadian Olympic hockey teams from the opening game for both teams of the Sarajevo Olympics, February 7th 1984. The team featured future Habs players, Russ Courtnall, Kirk Muller and Jean-Jacques Daigneault, the last two not even drafted at the time and who would be part of the ’93 Stanley cup winning Habs.

The second video features Chelios in Habs hi-lites during the 1984 playoffs, starting with his first NHL goal in game 1 of the Canadiens-Bruins series.