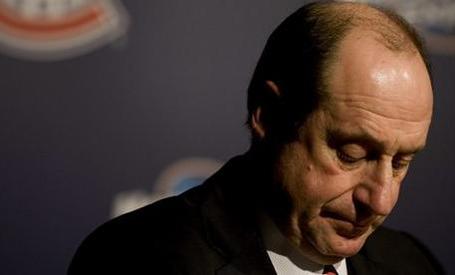 In the city where every possible hockey decision represents a potential controversy, it is difficult tell the smoke from the dry ice when it comes to today's decision by Bob Gainey to step down from the position of general manager of the Canadiens.

There will always be speculation attached to what occurred today and a certain "did he jump or was he pushed" stigma will always be tied to the things fans and reporters are not privy to.

Bob Gainey called it a personal decision, saying that he prefrerred to step down a bit sooner rather having to leave once it was too late.

Critics will suggest that time was imminent, others will note that with a trade deadline approaching, that the timing is rather odd and curious.

According to Gainey, he was asked by the organization for a commitment beyond this season, and was not prepared to make one.

There can be no doubt that Gainey leaves the team in better shape than when he took it over in the summer of 2003. There were a good number of high times and some low lights, as there is during any regime.

Of course, the speculation will reign supreme for weeks that Gainey was pressured into an early exit based on current player scenarios and team standing. That is the nature of Montreal to scope such extremities.

Earlier this morning on radio station CKAC, commentator and play by play man on the station Martin Maguire was speaking of the Canadiens seemingly never ending goaltending controversy, when he made reference to some inside information concerning the trade market.

Maguire claimed that the Canadiens had and still were shopping goalie Jaroslav Halak, and that offers for him had not risen in return value. However, it appears GM's took Gainey's stance in not moving Halak as a sign that Carey Price could now be had. Offers for Price were pourring in, as per Maguire.

Maguire's colour man on those broadcasts, former QMJHL coach Dany Dube, after Gainey's announcement today, recalled a conversation he had with the GM this past summer, shortly after he had rebuilt the club through free agent signing. Dube quoted Gainey as saying something along the lines of "this is the team you will be left with," hinting that Gainey knew of the possiblity that this was his last season at the helm of the club even then.

Whatever spin the events of the day take on in the future, how many of you actually believe that the Canadiens would fire Gainey in the traditional sense, if ever it came to that?

Gainey, a lifelong Canadien, has endured a great deal during his tenure. A family man with very strong personal convictions, he has lost two precious family members in the past decade. This past summer, Gainey became a grandfather for the first time. This past weekend he surely spent some moments of the phone with Brian Burke, who's family suffered a tragedy of their own.

Perhaps given the choice, his future with a lighter workload, balancing babies on his knee seemed more enlightening than running a hockey team in a city that never forgives.