Canadiens calling up an entire line not unprecedented

Share All sharing options for: Canadiens calling up an entire line not unprecedented 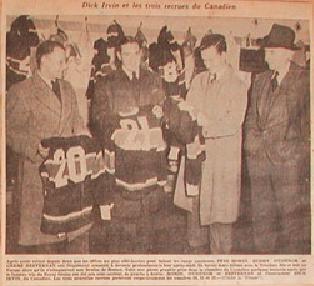 While neither member of the trio hit the scoresheet, the line of David Desharnais, Brock Trotter and Ryan White made quite a first impression upon Canadiens fans at the Bell Centre on Saturday in the win against Pittsbugh. Factually, two of the three the freshly called up Bulldogs players were not making their Montreal debut, as White had been in the lineup in midseason for a 12 game stretch and Desharnais made his NHL debut against the same Penguins on November 25, 2009.

However, it is in fact quite rare in Canadiens history that one intact trio are called up for a game. 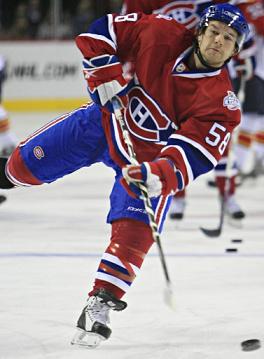 The one such previous occasion that can be pointed to occurred some 68 seasons ago when the Montreal Royals "Razzle Dazzle Line" of Buddy O'Connor, Gerry Hefferman and Pete Morin were brought up en masse to the Forum in 1941-42. The line wore numbers 20, 21, and 22 and had been together with the Royals for five seasons. Not under professional contract to the Canadiens, all three put their signatures on a Habs form on November 28, 1941. 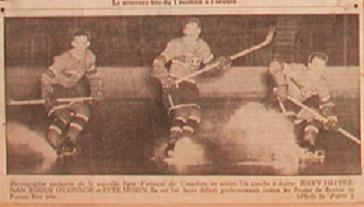 With the Canadiens sputtering offensively early that season, their callup yielded 24-43-67 totals to the team, and they appeared as a trio for 31 games before Morin was injured and the line was broken up. 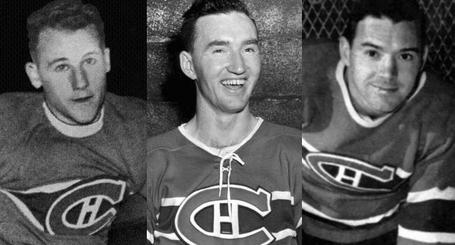 Those would be the only games Morin would play for Montreal. The following season, with World War II activity brewing, Morin enlisted and was on duty with a Montreal army munitions plant that employed several Canadiens players who did not enlist. Morin played one season with Montreal RCAF and another with Lachine RCAF Alouettes before being returned to the Royals for the 1945-46 season. 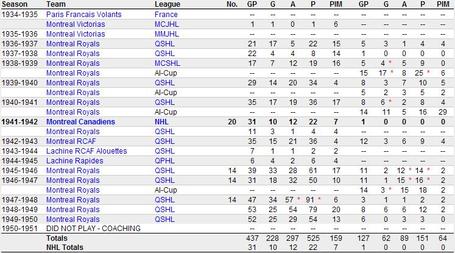 Hefferman's career fared a little better than Morin's. After totalling 5 goals and 15 assists with Montreal in 1941-42, he was returned to the Royals the following season. A late season playoff callup, he appeared in two games for the Canadiens in the post season, and stuck around for the entire 1943-44 season, helping the Habs end a thirteen year Stanley Cup drought by posting 28 goals and 20 assists in 48 games. Inexplicably, he did not make the team in 1944-45 and returned for two final seasons with the Royals.

Gerry Hefferman was one of the oldest living former Canadiens when he passed away from pneumonia at age 90 in a San Francisco hospice in 2007.

Of the three, it could be said that O' Connor was the real deal. He put in six solid seasons with the Canadiens before being dealt to the New York Rangers in 1947. It was thought at the time that O' Connor's skills were on the decline, but he proved several opinions wrong on that count. 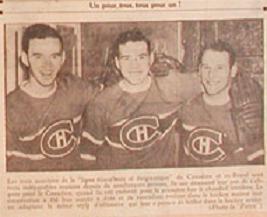 On August 19, 1947, O' Connor and Frank Eddolls were sent to the Rangers were Hal Laycoe, Joe Bell and Earl Roberston, and the trade was not a popular one with Canadiens fans. O' Connor responded with a career year of 24 goals and 36 assists in 60 games, finishing one point behind the Canadiens Elmer Lach for the scoring title. At years end, he was named the Second Team All-Star center and winner of both the Hart and Lady Byng trophies. He was inducted into the Hockey Hall Of Fame in 1988. He passed away on August 24, 1977 at the age of 61. 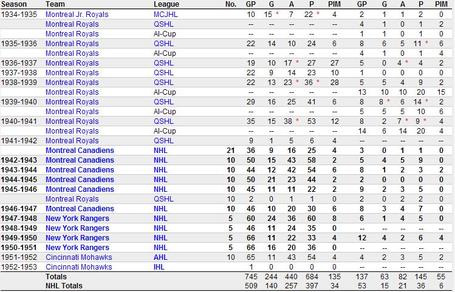