Share All sharing options for: Canadiens, Injected By Kiddie Corps, Roll Over Penguins 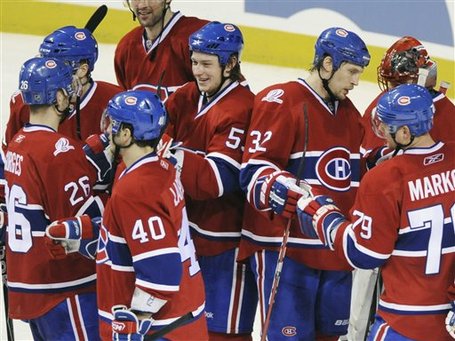 Seven points of a possible eight in the past week and a third consecutive day spent as the sixth place team in the conference.

The ying yang world of the Montreal Canadiens ain't a bad place to be for the team and their fans today.

To think that their chances against the Penguins weren't given a lick with injuries mounting and more callups in recent days than a coach can keep track of.

Incredibly, with Benoit Pouliot and Marc - Andre Bergeron injured, the Canadiens chose to face Pittsburgh by calling up an entire line - that of David Desharnais, Brock Trotter and Ryan White - from the Hamilton Bulldogs, in what could best be described as an unforeseen move. In all, six players who began the season in Hamilton dressed for the Canadiens.

In a season in which nothing has been predictable for the Canadiens, the youngsters motivated with an inspiring performance, literally a buzzsaw on every shift. They multiplied scoring chances, coming oh so close too many times to count. Those on hand at the Bell Centre were treated to a memorable performance and a highly entertaining game. 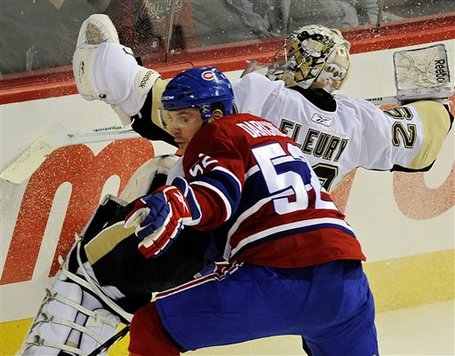 After such a dizzying display, where does one begin?

How about that there wasn't one player on the ice this afternoon wearing red that didn't look good?

The Canadiens as a whole, administered a severe spanking on the Stanley Cup champions, so thourough that it ought to reverberate and inspire confidence for this lineup for games to come.

Setting the tone was Mathieu Darche, followed by the trio of kids called up from Hamilton.

This Darche - who cares if he is 33 years old - is a keeper. Man, does he have some spike. He's part pest and irritant, part playmaker and consumate teammate. Giving a not so gentle rump bump to goalie Marc - Andre Fleury behind the Pittsburgh net to set up a gimme goal by Tomas Plekanec set the tone for the game.

Desharnais, Trotter and White were absolutely dominant, and although they did not score, each of their shifts helped raise the tempo for whatever line followed. After the kids made messes of the Penguin defense, players such as Plekanec (1-2), Gionta (2-1) and Gomez (1-1) were left to pick up the spoils.

Incidentally, you gotta love the numbers these kids wear: 53, 58 and 59, all years the Canadiens won a Cup!

Oddly, the trio's time on ice did not reflect what was witnessed. I'd have guessed that all three played upwards of 15 minutes each, but the stats tell a different tale: 11:41 for Desharnais, 11:07 for Trotter and 9:50 for White. 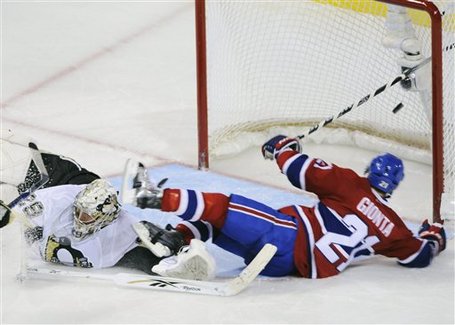 If anyone had told you that the Montreal would outshoot Pittsburgh 32-21 on the day, you'd have told them to put the glue away.

From the drop of the puck, the Canadiens pressed, won puck battles, followed through with vigor and vinegar, and never quit on plays inside the Pittsburgh. On several occasions, Canadiens players picked Penguin pockets as they were headed up ice, and at one point in the third period had their foes chained in their zone for what seemed like a good two minutes.

Indicative of the Canadiens zeal on the day, is that they managed to make a high flying club such as the Pens take seven minor penalties, three of which were brought on by the kid line.

It was by far the Canadiens most impressive win of the season, given the circumstances, and it could be said that every player contributed to a near perfect sixty minute effort. 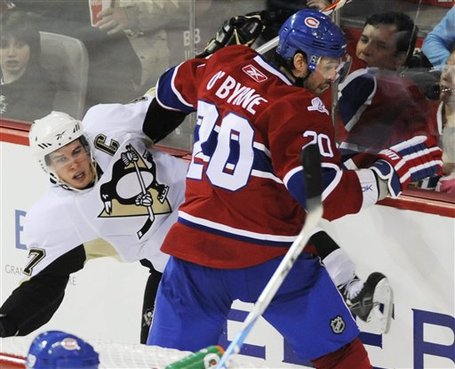 With Malkin playing wing on a line centered by Jordan Staal, the Russian did not take a single faceoff on the day. The Canadiens dominated the dot, winning 31 of 57 drops.

Thanks to the kids, Martin was able to roll four lines, with the Pittsburgh trio of Tim Wallace, Michael Rupp and Mark Letestu (I thought it was Le Testube!) being no match for the kiddie corps.

We saw both sides of Scott Gomez in this game. He was Johnny on the spot for the Canadiens third goal and set up Gionta's second quite nicely, but he was too often fading from plays, passing off rather than nosegrinding to the goal mouth. His game is somewhat maddening this way. On the downside, he was on ice for all three Pittsburgh goals.

Jaroslav Halak didn't need to be phenominal for once, to earn the win. With his team seemingly only focused when the Crosby line was on, he was left on his own quite often in this one.

Looks like Matt D' Agostini's career in Montreal is toast. He was a healthy scrath, sitting to watch Desharnais, Trotter and White made a solid impression that surely places them higher on the team depth chart than he at present. I'll be curious to see if the lineup remains the same against Boston, but if they kids excel once more, how do the Canadiens send all three back to Hamilton?

Something to think about. Ben Maxwell, playing unaturally at wing is likely destined to head back to Hamilton soon. D' Agostini may be dealt or reassigned to the Bulldogs if he could clear waivers. With injury returnees coming eventually, the roster spot still assumed by Georges Laraque hurts. A swift move by GM Gainey will be to get Laraque to waive that no movement clause so he could be traded, allowing a playoff also ran to do the Canadiens a favour by taking his salary on for the final six weeks. If Gainey were to get Laraque to agree, all he'd need would be a trade partner to give the Habs their seventh rounder in 2010 for the Canadiens sixth to make it worth their while.

How soon will it take for Hamilton coach Guy Boucher to make it behind the Montreal bench. I say before the end of next season. By all I see, read and gain evidence from, Boucher is doing a hell of a job and would surely be lost should jacques Martin fullfill his term in Montreal.

Go figure. The Canadiens without Mike Cammalleri are now 3-0 and have scored 8 even strength goals in that span.

Didn't know NHL.com had this feature. If you ever wanted to see which player was on the ice at a particular time, check out Full Play by Play in the Game Reports section.

If you're like me, you are excited and thinking ahead to what this lineup might do tomorrow against Boston.