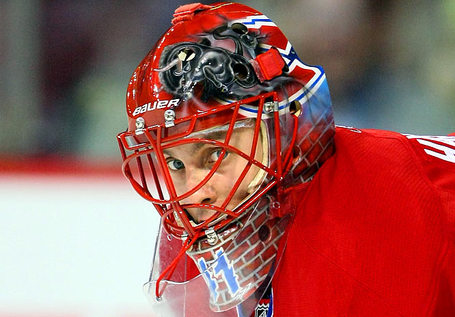 The current design the mask sports is again non-symmetrical as his past ones were, and features a raging black bull charging from an obscured Habs logo on the left side.

On the front chin, a brick wall.

Personally, masks that aren't symmetrical drive me a bit nuts. I like thing even on both sides somewhat, although I understand the artistry.

Perhaps that mask offers a perspective on Halak himself. A little off kilter at times, all he does is stop pucks and win. Regardless of opinion, and mine have often bounced back and forth, facts are undeniable. As much as I like Carey Price and believe in him still, Halak is now the Canadiens number one goalie. No comfirming announcement is required. 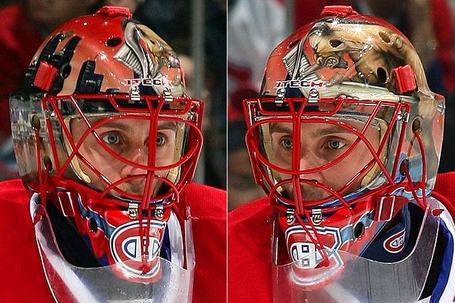 Last night, the Canadiens were rather ordinary in Boston. Considering the Bruins are fighting desperate but playing nervously, this assessment of the Habs is rather bleak.

Early in the first half of the opening frame, the Bruins looked a mess. They had a miserable time leaving their zone and incompleted passes kept them staggering. The Canadiens were gifted with several opportunities, unable to convert. It's an old story gaining in mold.

What was frustrating to see was that the Canadiens were well positioned as interceptions told, but old habits returned. The Tomas Plekanec line was all the Canadiens had going for them. On three successive trips into the Bruins zone, Scott Gomez shot floaters from fourty feet out that Tuukka Rask could have swatted with a tennis racket.

Soon the Bruins were up by one and it was up to Halakrobatics and hope if the Canadiens were to pull one off. Falling down by two, and with the Habs hardly threatened Rask, it looked like a loss mailed in. 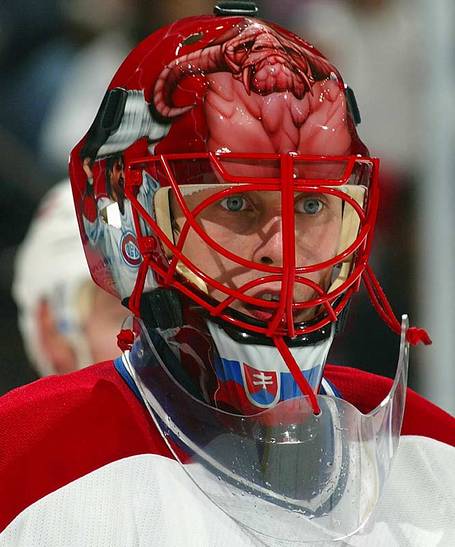 The game's unsung hero was Mathieu Darche, key to both Canadiens goals 39 seconds apart and not a moment too late as the second period wound down. Darche did what needed to be done, bothering Rask by placing his butt inches from his blocker and gloves on the limits of legality. It was textbook "this is how you drive goalies mad" and on each play, a Bruins defender had to commit himself to Darche. With a defender occupied up high, lanes were created for passing and shooting down low.

Darche might be a little more purple for his efforts, but his team got the win.

From there on, Halak resisted, and the Habs employed the old stand by of the shootout for the win.

Sixth place is hardly as comfy as it sounds. It is precarious of course, and very temporary, but nice for one day.

An eight team logjam separated by six points sees clubs ranked sixth to thirteenth in a dogfight to the end. Most have games in hand on the Canadiens, who will likely need 13 wins at the very least out of 24 remaining contests to extend their season.

It's a helluva tall task that will only be achieved if the goaltending holds up.

If anyone is still expecting GM Gainey to deal Halak before the deadline, they can forget about it. Not going to happen.