Kovalchuk To Jersey Might Be The Stupidest Hockey Trade Ever 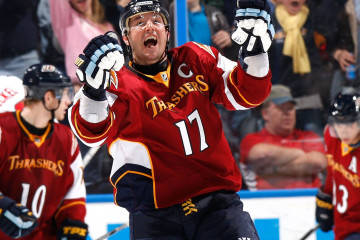 Colour me baffled, but after weeks of hype and over a year of speculation the Ilya Kovalchuk deal that makes him a New Jersey Devils comes off as one big wet petard.

How it looks, is that Devils GM Lou Lamoriello has paid the rental player rate for a player who essentially becomes just that. He's also gone out and gotten the most ill fitting player his team could have in terms of system adherence. The always defensively conscious Devils have now a player who rarely commits himself to his own end.

Statistics and one good look will always bring on the assessment that Kovalchuk is a franchise player and supreme talent, but is he really? In Atlanta, during his time, the Thrashers have been a model of underachievement. He was the face of a franchise that played to half empty seats.

Regardless of assessment, one can surely say that Lamoriello certainly didn't overpay.

The performance of Atlanta GM Don Waddell in all this is also wholly questionable. For his franchise player, the man known as Teflon Don has received three midling talents with limited upside and a late first round pick in next years draft.

Can anyone suggest there is excitement on the Atlanta hockey scene at the moment?

This blown deal likely represents the beginning of the end of NHL hockey in Atlanta for a second time.

Where Waddell burned this deal is in not allowing teams interested in Kovalchuk to discuss a long term contract with the player, hence upping the trade ante on what becomes a sure thing instead of a rental player proposal.

Compounding the ludicrousness, is that contract talks and numbers demanded by Kovalchuk were put forth throughout the entire process, which in turn lowered the number of interested teams and the trade return significantly.

It's no secret that Atlanta ownership is a mess. It explains in part why Waddell is still on the job after striking out on the Marian Hossa trade, in a blueprint scenario, two seasons ago.

Finally, Kovalchuk for his own part comes off painted as a selfish player by his own doings and by Waddell's refusal to let GM's speak with the agent and player. If Waddell's word is true and that Kovalchuk is primarily interested in a deal that pays him close to 20% of a team's cap space, then it can be said that the player's main interest surely isn't in winning a Stanley Cup.

Funny, but you can see where all this is headed come July 1, when Kovalchuk inks a mega deal with another franchise desperate for a markee name and going nowhere fast.

The performance of Kovalchuk's agent Jay Grossman can also be questioned. Unless his mandate from the player was "get me to hell out of here now" he's failed his client in some sense. The salary demands are insanity when considering the shrinking cap on the horizon.

Trades are great selling points for any sport, in that it extracts all kinds of excitement and speculation. The front page news and lead in discussions light imaginations, while fans in 29 cities consider scenarios.

When trades go down like this, it hurts the sport because all the fans see is one greedy player, who will not earn his future payday, getting his wish.

If there is any excitement in hockey today, after the trade, it should be in Quebec City. They have just moved one step closer to retreiving a lost hockey franchise.