Canada Owns A 12-2-1 Record All-Time Against U.S. In Olympic Play

Share All sharing options for: Canada Owns A 12-2-1 Record All-Time Against U.S. In Olympic Play 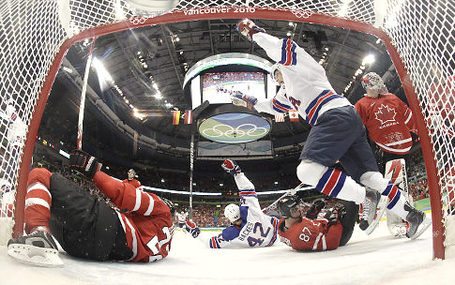 Will Canada have history on their side in Sunday's gold medal game or will the United States reverse the trend in Vancouver 2010's Olympic hockey finale?

And just what is the trend?

In 15 previous meetings with the United States going back to 1920, teams from Canada own a dominating 12-2-1 record. Canada have outscored their rivals south of the border by a 59-33 over meeting in 14 Olympics games, but consider that the United States have twice kicked off a decade with an Olympic Gold. It happened in 1960 and 1980, the only years since 1920 that the Winter Games were held in a year that began the decade.

Trends mean nothing, and sometimes history is not very relevent. Oh yeah, and the pressure is hardly ever on the underdog. 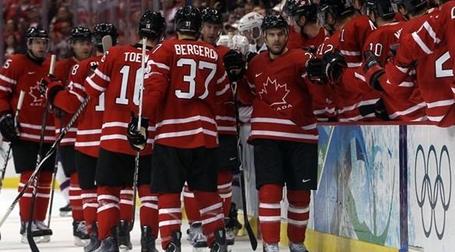 Two diverse opinions heading into today's game are that the Americans have nothing to lose, having already overachieved in the eyes on many.

Tell that to the players with USA emblazoned on their jersey fronts!

Another thought, with respect to the States win against Canada last week, is that can the U.S., who won despite being outplayed, turn the trick twice against Canada in such a short span?

In overall medal counts, Canada have 7 gold, 4 silver and 2 bronze, while the U.S. have 2 gold, 7 silver and 1 bronze. Anyway you slice it, an edge history may not translate into one presently. Here are the scores of all meetings since 1920:

The sport of ice hockey (is there really any other kid?) made its debut at the Antwerp, Belgium games at the 1920 Summer Olympics. The seven participating countries were Canada, the United States, Belgium, Czechoslovakia, Sweden, France and Switzerland.

Canada and the United states first met in Olympic play on April 25, 1920 in the semi-finals of Gold medal round. Canada were represented by the Winnipeg Falcons, and they won the game 2-0 on goals by Frank Fredrickson and Konrad Johannesson. Goalie Walter Byron earned the shutout for Canada.

Hockey moved to the Winter Olympics in 1924 at Chamonix, France. Canada, Sweden, Czechoslovakia, and Switzerland formed Group A, while France, Great Britain, Belgium and France formed Group B, with the top two teams in each group advancing to the medal round. Canada won Gold a second time, with the U.S. placing second and Great Britain third.

Canada, represented by the Conn Smythe coached Toronto Varsity Grads won the Gold medal in hockey for a third time. Harold Ballard was assistant team manager. A U.S. hockey team was not entered in these Olympics.

At Lake Placid, New York, a double round-robin format was employed for the four participating countries, which included Canada, the United States, Germany and Poland, with a total points system being used to determine the winner. Canada defeated the U.S. in double overtime in the first contest on February 4 by a 2-1 score. It was the only U.S. loss in the tournament. The two nations met again in the final game for Gold on February 13, and again the teams went to overtime. After six full period, the game was a draw and Canada had won its fourth Olympic Gold Medal.

For the 1936 Olympic games in Garmisch-Partenkirch, Germany, Canada and the United States were joined by teams from Austria, Latvia, Poland, Germany, Italy, Switzerland, Czechoslovakia, Belgium, France, Great Britain, Sweden, Japan and Hungary divided into 4 pools. Two winners from each group advanced, with relevant results from earlier rounds carried over into the medal rounds.

Germany and Canada were both in disagreement after the final medal round, and protests they had launched were igored. An earlier win by Britain over Canada in the semis gave them the Gold. Canada, represented by the Port Arthur Bearcats, and the U.S met in the medal round's anticlimatic final game on February 16, with Canada winning 2-1.

After World War II forced the cancellation of the Olympics in 1940 and 1944, the games resumed in 1948 in St. Moritz, Switzerland. Confusion arose over the U.S. entry in the hockey competition, as it was proven it had been an openly professional club. The team, known as the Brundage entry, was ruled ineligible for medal competition but still allowed to play in tournament games.

In the nine team tournament, Canada and the United States were joined by Austria, Poland, Italy, Switzerland, Czechoslovakia, Great Britain and Sweden. Canada were represented by the Royal Canadian Air Force Flyers team, and they defeated the U.S squad 13-3 on February 6. The goal margin was an important deciding factor for Canada, as the Gold medal was settled on goal differential between themslves and Czechoslovakia when the nations finished with identical won loss records and played to a scoreless draw.

At the Olso, Norway Olympics in 1952, nine teams again competed for medal, with Finland and Norway replacing Italy and Great Britain in the tournament. Canada were represented by the Edmonton Mercurys, winners of the 1950 World Hockey Championship in London.

Canada were undefeated in the round, winning seven of eight games to claim the Gold once more. On February 24, Canada lost its only point in a 3-3 tie with the U.S. Incidentally, this would be Canada's last Gold medal until 2002.

The 1956 Winter Olympics were held in Cortina, Italy and featured a 10 team 3 pool playdown. Canada were represented by the Kitchener - Waterloo Dutchmen, champions of the Senior Ontario Hockey Association. Their goaltender was Denis Brodeur, father of future goaltending legend Martin Brodeur.

After Canada won their pool in a clean sweep, they lost for the first time to the U.S. team by a 4-1 score on January 31. A second loss, a 2-0 shutout at the hands of the USSR on February 4, relegated Canada to a silver medal in hockey for the first time.

The Winter Olympics were held for a second time on U.S. soil, this time in Squaw Valley, California with nine nations competing. Canada, represented again by the Kitchener - Waterloo Dutchmen, swept through the preliminaries as expected and advance to the six team medal round where it posted a 4-1 record.

The loss, Canada's second in as many Olympics, came at the hands of the U.S team on February 25, a 2-1 defeat. It gave the Americans, after five Silver medals and one Bronze in Olympic play, their first hockey Gold. The moment is known today as the "Forgotten Miracle."

The 1964 Olympic hockey tournament at Innsbruck, Austria was the first to result with no metal standing for Canada or the United States. In retrospect, the event was badly managed. Canada had initially been awarded the bronze medal, but organizers revised the goal differential format for breaking standing ties.

With three nations tied with 10 points, Czechoslovakia were award the bronze over Canada based on head to head competition. However, the same method did not apply regarding Canada's game, which it won against silver medalist Sweden. All three teams had finished the round with 10 points, with Sweden holding the best goal differential. The United States finished fifth in the tournament, losing 8-6 to Canada on February 3.

The USSR's dominance at Olympic hockey had begun in 1960 and continued in Grenoble, France and Canada's National Team were no match. Canada earned Silver with a 5-2 record, defeating the United States 3-2 on February 11.

Canada returned to the Olympics in 1980, but the spotlight was stolen by the United States, with their surprising upset of the five-time defending champion Russia club. Often forgotten in the "Miracle On Ice" story, is that Canada, with a 3-2 record, failed to qualify for the medal round, and thus never met up with an American team and its date with destiny.

Neither Canada, nor the U.S. earned medals at Sarajevo, Yugoslavia in 1984. Both nations were grouped in the B pool, and met on February 7 with Canada winning 4-2. The Russian club reclaimed the Gold medal, with Czechoslovaki and Sweden finishing second and third respectively.

Canada and the United States were grouped apart for the 1988 Calgary Olympics, with only Canada advancing to the medal round. The team did not in round play.

In Albertville, France in 1992, Canada and United States were on a collision course for Gold medals after each winning their respective pools. Each nation won their quarter-final match, but when the U.S. lost their semi-final to the Unified Team (Russia) and Canada won their contest with Czechoslovakia, the Americans headed for a loss in the bronze medal game, while Canada settled for silver after losing to the Unifieds.

Canada and United States were grouped together in pool B at the Lillehammer, Norway Olympics in 1994. Canada would go on to win the silver medal while the U.S. failed to qualify for the medal round. Along the

Star-studded lineups graced both the Canadian and U.S. Olympic teams at Nagano, Japan in 1998, as for the first time in history fully professional squads from both sides of the borders were filled with NHL talent. Both teams were grouped in the A Division and met on February 16, with Canada winning 4-1. Neither nation, despite the NHL stars, earned a medal, Canada came closest, being ousted in a semi-final shootout game with Czechoslovakia and losing the bronze medal game to Finland.

In Salt Lake City, Canada earned its first gold medal in 46 years, with a 5-2 win over the U.S. in the gold medal game on February 24. Both teams took a different path to the final, with the United States going endefeated until encountering Canada, who stumbled through the qualifying round with a 1-1-1 record.

In Torino, Italy in 2006, both Canada and the United States were eliminated from medal competition with semi-final losses and did not meet as they were in separate groups.