Share All sharing options for: Any Of Nine NHL Teams Could Have An Olympic Medalist Of Every Mint 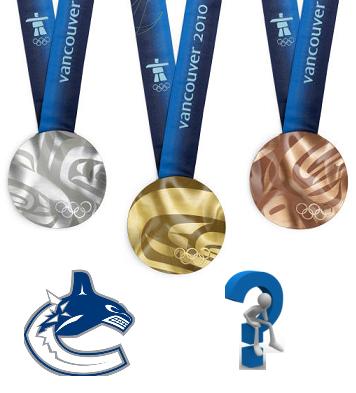 As hockey fan's gazes are firmly set on tonight's semi-final games at the 2010 Vancouver Olympics, it is curious to note that eight different NHL teams have representation from at least three finalist countries.

Paring down the tableau of NHL team player representation by country from this nhl.com link, one can see that eight NHL clubs have a shot at having a gold, silver and bronze medalist within their ranks come Sunday night's gold medal game.

As it stands, the rosters of Team Canada, Finland, Slovakia and USA comprise a total of 77 NHL players.

The Anaheim Ducks, Boston Bruins, Buffalo Sabres, Carolina Hurricanes, Chicago Blackhawks, Los Angeles Kings, New York Rangers and Tampa Bay Lightning all have players on three country's rosters. The worse case scenario for all seven of these teams is that they will have no less than two each.

It surely must be Vancouver Canucks' year, as there is no such mystery in terms of their medals chances. The Canucks have representation on all four surviving Olympics teams and three of those are destined to have medals hung from their necks come Sunday. Oddly, none will be named Sedin.

The Canucks are represented by Roberto Luongo (Canada), Ryan Kesler (USA), Sami Salo (Finland) and Pavol Demitra (Slovakia). Come the Canucks next home game, one of these four will be a spectator to an ice ceremony honouring the team's Olympic medalists. As luck, both good and bad, would have it, Vancouver are on an NHL record length road trip (14 games) thanks to the city hosting the Olympic games. With six road games left to play out, that Canuck ceremony isn't slated until March 14, against the Calgary Flames. 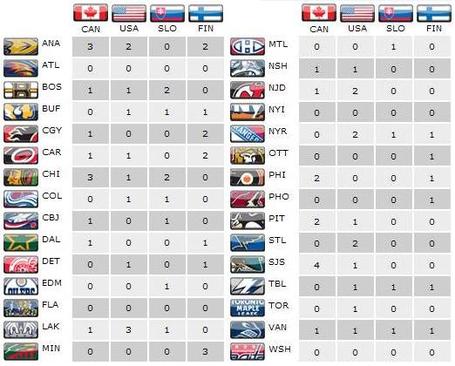 Rather than listing countries in order of potential gold, silver and bronze finishes, let's take an odd man out approach.

Boston, Los Angeles and Chicago will have a medalist of every mint.

Anaheim and Carolina will have a medalist of every mint.

Buffalo, Tampa Bay and the Rangers will have a medalist of every mint.

If the United States finishes fourth:

Only the Canucks (Oh, the irony!) will have a medalist of every mint.

In other Canadian hockey cities, only the Calgary Flames are guaranteed a medalist among Jarome Iginla (Canada) and Miikka Kiprusoff and Niklas Hagman (Finland)

In Montreal, Canadiens fans are Canadian hockey fans, and although Habs faithful wish nothing but the best for Slovakian goaltender Jaroslav Halak, the cheering will almost entirely for the Canada side.