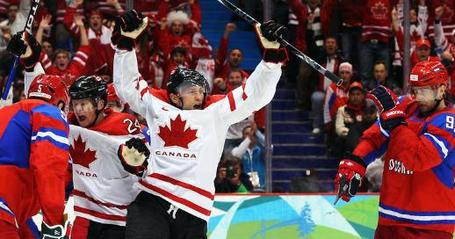 Whatever the fate of the 2010 men's Olympic hockey team, it did manage to put one horrendous losing streak to bed with a 7-3 crushing of Russia on Wednesday night.

Perhaps the context is difficult to grasp, but Canada had not defeated the Russians in Olympic play since 1960.

Of course, the scales of play have not always been balanced since that last, long ago win. Canadian professionals were long denied entry into the Olympic event, while Russians who were essentially equal to the Canadian pros were dubiously regarded as amateurs.

Everyone on Canadian soil knew the deal stunk, hence the neccessity of the 1972 Summit Series to settle the score.

Several Canadian squads over the past fifty years have claimed victory of Soviet Union teams numerous times. There have been World Junior Championship wins, Canada Cup wins and World Championship tournament wins, just none on the Olympic scale

Here is a rundown of a half century of Canadian Olympic hockey futility:

In 2006 at the Turin, Italy Olympics, a team of Canadian NHL professionals were beaten 2-0 by Russia on February 22, in the quarter final round. On that night, Canada was shut out by San Jose Sharks netminder Evgeni Nabokov. Sweden would go on to win the gold medal, with Finland placing second and the Czech Republic third. It was a tournament to forget for the Wayne Gretzky managed team. 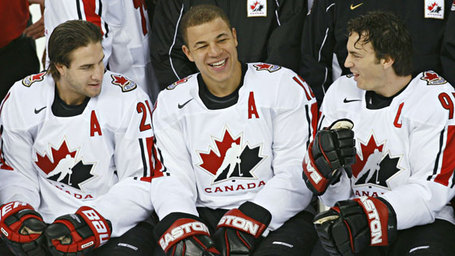 Salt Lake City in 2002 was a watershed moment for Canadian Olympic hockey, and a true high point for Canada as both the mens and womens team won gold. It hardly hurt Canada's chances that they did not meet the Russian squad, who were eliminted by the United States team on February 22, by a 3-2 score. Thanks, Yanks! 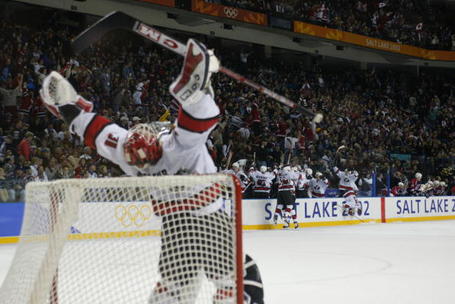 Nagano, Japan in 1998 marked the first time true Canadian professionals appeared in the Olympics, and Canada came oh-so-close to winning it all. In the end, they settled for a fourth place finish, after losing 3-2 in a shootout to the Czech republic on February 20. Fans who watched the game will forever recall in angst, the moment coach Marc Crawford elected to use Ray Bourque in the shootout over team captain Wayne Gretzky. The move surely stirred one of the greatest second guessing arguments in Canadian Hockey history. Canada was then relagated to the bronze medal game the next day, and promptly lost 3-2 to Finland. Again, Canada avoided playing the Pavel Bure lead Russians, who lost the gold medal game to Dominic Hasek's Czechs.

The 1994 Lillehammer, Norway Olympics saw a Canadian National team entry win silver. The team was comprised of star collegiate and university players and bolstered by several NHL bound prospects such Paul Kariya, Brian Savage, Adrian Aucoin, Petr Nedved and goalie Corey Hirsh. Although gold was not achieved, the tournament was considered a success for Canada, who lost the final game on a shootout goal by Peter Forsberg that has been immortalized on a sramp in Sweden. Canada were all set to meet the Russians in the final, when they were snuffed out by the Swedes 4-3 in the semi-final.

Canada also took silver at the 1992 Albertville games, with a lineup that included future NHLer Eric Lindros and reinstated amateur goalie Sean Burke. Close but n0 cigar again, as Canada lost the final to the Russians, who were so named the Unified Team, as the walls of Soviet communism were then crumbling. Canada in fact lost twice to the Unifieds in 1992. The first came in the Group B preliminaries on February 16 with a 5-4, and again in the final on February 22, by a 3-1 score. The tournament leading scorer was Joe Juneau, with 6 goals and 9 assists in 8 games. A Czechoslovakian team lead by Robert Lang earned bronze. 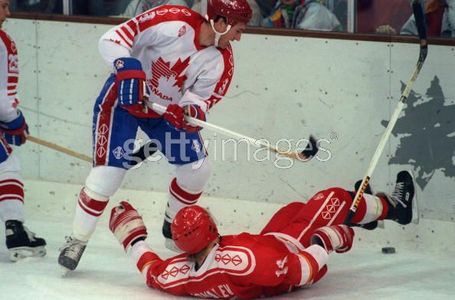 On the home turf of Calgary, Alberta for the 1988 games, Canada placed out medal contention, due to a 2-2 tie with Sweden on February 22. The knot, in a game played prior to the medal round, gave the Swedes one position point higher in the final standings, and Canada finished fourth. The Soviet Union emerged victorious in the gold medal game with Finland, and in retrospect it isn't hard to see why. The Soviet team was stacked with Red Army legends such as Krutov, Makarov, Kamensky, Kasatonov, Larionov, Semenov and future NHLer Alexander Mogilny. Canada faced this powerhouse lineup on February 24, and were slammed with a 5-0 loss.

The 1984 Sarajevo, Yugoslavia Olympics saw the debut of the Dave King coached Canadian National team. After a 4-1 record in the preliminary round saw them advance to the medal round, Canada was in for a reality check. Dumped 4-0 by the USSR on February 17, Team Canada was then shutout by the Swedess two days later. An earlier carried over game from medal round group matches was a 4-0 whitewash at the hands of the Czechs. Not a resilient debut for King, who would return twice more to coach Canada. 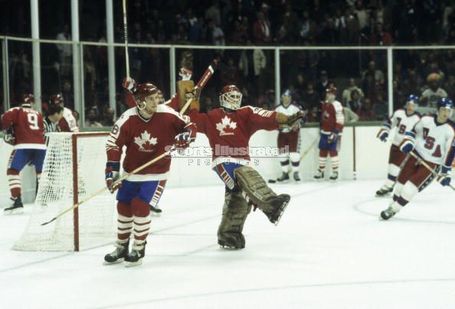 The 1980 Lake Placid, New York Olympic games will forever be recalled as the momentous "Miracle On Ice" games for the U.S hockey team, who claimed a surprise and stunning upset of the Soviet Union club in the semi-finals. Although the Americans beat Finland to claim gold, Finland was the fourth place finisher based on standing points. The Soviet Union won silver and Sweden the bronze at the games, while Canada barely cause a ripple. A 4-3 loss to Finland on February 16 was the game that eventually eliminated Canada in a tie breaker with the winners. The coup de grace for the Canucks in relative terms was a 6-4 loss to the USSR on February 20. Althouth the fourth place finish for Canada was something of a disappointment, Canadian hockey fans were pleased to see a return to the Olympic stage after a 12 year protest.

In 1970, two years prior to the Munich, Germany Olympics, Canada withdrew from official International Ice Hockey Federation events such as the Olympics. The National Team program was suspended in light of the IIHF's refusal to allow Canada to use semi-pro players that would put them on par with other nations doing the same through duplicitous manoeverings. It would return in 1977, shortly after the Montreal Olympics, in an agreement that allowed the use of professional players to enhanc their World Championship teams late in the NHL hockey season. The agreement also paved the way for future Canada Cup tournaments.

Canada claimed a bronze medal at the 1968 Grenoble, France Olympics, with a 5-2 record after seven games. Once again, the Soviet Union had finished first, with Czechoslovakia second. The tournament was an eight team round robin with Canada's final match against the Soviet Union on February 17, ending in a 5-0 loss. The Canadian roster was made up of a bevy of minor pro castaways who had hung onto or applied for amateur status. The lineup looked like a roll call for future NHL journeymen and included names such as leading scorer Marshall Johnston, Fran Huck, Brian Glennie, Danny O'Shea and Wayne Stephenson. The loss was likely the last straw for the outmatched Canadians. 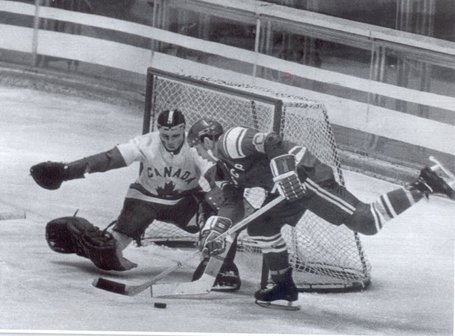 Similar to 1968, Canada again finished fourth at the 1964 Innsbruck, Austria games with a 5-2 record. They got off to a promising 5-0 start before losing 3-1 to Czechoslovakia and 3-2 to the Soviet Union on February 8. That particular loss began the interrupted 50 year drought that ended February 24, 2010. 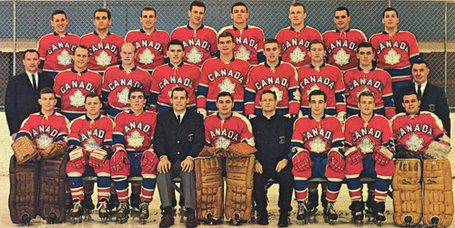 At the 1960 Squaw Valley, California Olympics, Canada was a pre-tournament favorite, along with the Soviet Union, Czechoslovakia and Sweden. To the surprise of many, all four clubs were defeated by the U.S hockey team, in a win that is rightfully now regarded as the Forgotten Miracle. Canada's entry at these games was comprised of a club known as the Kitchener-Waterloo Dutchmen, which included Harry Sinden, Cliff Pennington and future Montreal Canadiens sharpshooter Bobby Rousseau. Three pools of nine clubs eliminated three teams in a preliminary round and the final round standing determined the medal winners. Canada, for all intents, lost gold on February 25, with a 2-1 loss to the U.S. They defeated Sweden two night later before settling in for a match with the Soviet Union onm February 28. Little did Canada know that the ensuing 8-5 win over the Russians would be their last in Olympic play for the next 50 years.

In all, the losing streak to the Soviets stretched to eight games over 10 Olympic years. They were outscored 30-11 during the drought. The individual scores are as follows:

For some truly in depth coverage of hockey Olympics past, check out Joe Pelletier's Greatest Hockey Legends. Trust me on this, International Hockey is where Joe excels! Enjoy.