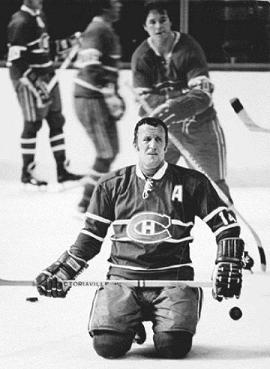 If I were to compose a list of the all time under- appreciated Montreal Canadiens players, my Top 10 list would elicit all kinds of debate / argument amongst Habs fans of different age groups.

Lists do that, and that is why we nag and bop heads over such things!

There are varying degrees of miscomprehension in such listings, much to do with who each fan has personally seen play. It extends to what we have read in print, online or otherwise, and understood of what has been been written about many of the Canadiens' greats of the past.

An example would be: How many readers have seen actual games involving Maurice Richard, his brother Henri, Jean Beliveau and Guy Lafleur?

Some fans, may just have come aboard just before Patrick Roy was traded away.

For myself, what I have seen is only the half of it in regards to Canadiens history, and I'm more curious about what I missed out on. I've always thought that the more you learn beyond a personal perspective, the more educated and astute one becomes.

For the record, Rocket Richard retired two years before I was born; I am fortunate enough to recall Beliveau's 500th goal, having seen him play three seasons in total; Henri I was able to appreciate for five seasons; and Lafleur was the first future Hab I saw play junior in person.

Those rich experiences made me crave for Canadiens history, leading me to wanting to connect with other Habs fans. There are over 700 players who have worn the Canadiens colours, and all have distinct personal stories as individual as people themselves. Looking into them, is where insight takes place. It is where one might find a truly unique take on a subject as wide spanning as a Habs All Time Unsung Heroes list.

This piece was inspired by postings in recent days at Kevin van Steendelar's Ya! The Habs Rule! site. In short, he listed three players - Ken Mosdell, Tom Johnston and Rogie Vachon - who would be on such a list of mine.

The other 7 in my Top 10 would be Claude Provost, Wildor Larochelle, Pierre Bouchard, Floyd Curry, Doug Jarvis, Jean-Guy Talbot and Charlie Hodge - not a Hall Of Famer among them.

Wildor Larochelle, a consistent and dependable performer, spanned some of the Habs darkest years

Floyd Curry, a man for all seasons and role player par excellence in th e1950's

Doug Jarvis, a faceoff circle surebet and the NHL's Ironman

Charlie Hodge, a Halak precursor, starring in the backup and number one roles in a crucil time in Habs history