Share All sharing options for: Canadien Olympians: Andrei and Sergei Kostitsyn of Belarus

The following is part 2 of a series profiling Montreal's Olympians. Today's first installment is Andrei Markov of Team Russia, and Yannick Weber of Team Switzerland.

Along with fellow NHLer Ruslan Salei, Sergei Kostitsyn will be expected to lead a fledgling Belarus team against some seasoned opposition in Group C. Sadly, Andrei has been forced to pull out due to his lingering knee injury. Another Belarussian, Mikhail Grabovski, was named to the team, but is out with a wrist injury.

Both brothers have had experience on the big stage in the NHL, though last year's playoffs were probably an experience to forget. However, in the 2008 opening round series against the Boston Bruins, both Andrei and Sergei looked at home in pressure packed games. The pressure will certainly be on again, as if Sergei is unable to put the puck in the net, Belarus does not have a hope of advancement to the quarterfinals.

Win or lose, the experience should be extremely positive for the brothers. Sergei will get the experience of being a team leader, even if he's not wearing a C or A. Andrei has established himself as a standout of Belarus's hockey development program, and his absence will be painfully noticeable. Their hockey program has been greatly improved on the elite level through the efforts of Curt Fraser, Glen Hanlon and Dave Lewis in recent years.  Lewis will be an assistant, alongside fellow assistant Vladimir Tsyplakov, who you may remember as a defenceman with the Buffalo Sabres and Los Angeles Kings in the early half of the decade. Ruslan Salei, an old defensive veteran from the Colorado Avalanche, will serve as the team's captain in his third Olympics. 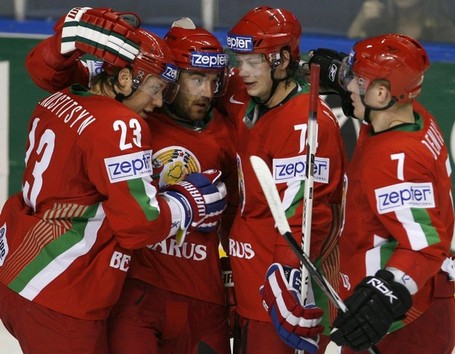 Sergei and Mikhail Grabovski have at least publicly put their personal feud behind them, so there shouldn't be any back-room tension going on with the team. Expectations will not be high (apart from Belarusian fans!), as they are known to be over-matched against Finland and Sweden's all-star caliber rosters, and may even be fourth to a plucky German team led by Johen Hecht. However, if a lot of luck goes their way, they could put a shock into one of the aging superpowers in their grouping. Both Sweden and Finland have some beat-up stars, and for Finland, age is becoming a major issue for some of their top forwards from the past (Selanne, Koivu, Lehtinen). Belarus still has their lucky charm in goaltender Andrei Mezin, who led them to victory over Sweden in 2002, and who has a full career of professional experience in Russia, the AHL and the IHL. Belarus is likely an also-ran, but with Lewis and Tsyplakov helping out the coaching staff, they should put up a good fight.

Habs fans should be particularly excited for the great opportunity this offers Sergei Kostitsyn to make his mark on the international stage, which could give him a ton of confidence as the Habs enter their stretch run. He's performed pretty well of late (depending on your perspective) as one of Montreal's top forwards, and a successful stint with Belarus would give him a great boost. Furthermore, even though he's only 21, he'll undoubtedly be one of the leaders of the squad, which will only help his confidence and maturity. With his brother and Grabovski out of the games, the spotlight will be Sergei's alone. 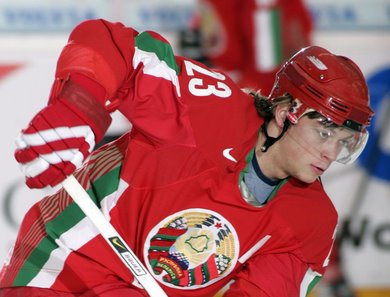 Its a real sting for the Belarusians, but Habs fans will undoubdtedly be breathing a sigh of relief that Andrei has chosen to rest his injured knee. However, given that all signs point to him becoming the top player for his country in  the 2014 games, its going to be tough for him to watch on the sidelines. Injuries will also be a concern for Sergei Kostitsyn. Salei appears to be finishing up his career in North America, but Habs fans will be crossing their fingers about injuries to their star Belarusian forward.

There's the legitimate question about over-burdening Sergei Kostitsyn. He already takes a lot of scrutiny by virtue of playing for Montreal, and Belarusian fans will be eager for a big showing. Given the opposition the team's facing, if Belarus goes three and done, hopefully Sergei will not become a target again. He's taken a lot of media abuse for a young twentysomething already.