The following is part 3 of a series profiling Montreal's Olympians. Today's final installment is Tomas Plekanec of the Czech Republic, and Jaroslav Halak of Team Slovakia. 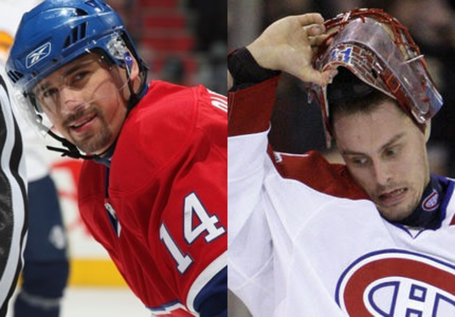 After the jump, a breakdown of why both Jaro and Plek have a good chance of winning Olympic bragging rights.

Why Jaroslav Halak will win:

Jaro's had a year to remember, and for Slovakia, that's timely news. Slovakia's national team has been stymied for years on the international front, usually due to the lack of an elite netminder. Jaro may not be there quite yet, but he's knocking on the door. Peter Budaj of the Colorado Avalanche is his backup if things go badly, but the Slovaks will be looking to Halak to put in some memorable performances against the Czechs and the Russians if they want to get out of the group stage in good standing.

Jaroslav Halak will look to recapture the magic he showed in World Junior tournaments in the past. 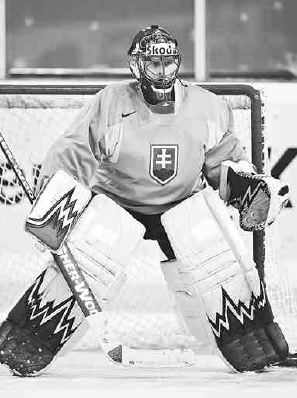 Luckily, Halak has a formidible complement of forwards in front of him. The only major question mark revolves around Marian Gaborik, who will be sidelined for the first two games with a thigh injury. There are a few x-factor players lurking in Slovakia's roster who are no longer NHLers, including Jozef Stumpel, a returning Zigmund Palffy and ex-hab playoff hero Richard Zednik. They could become a cruel surprise to Slovakia's opponents if the team catches fire early on. Marian Hossa (also banged up, but ready to go), Pavol Demitra, Tomas Kopecky and the easily overlooked Michal Handzus are other names in the mix. When you look over the full roster, it is not a group of forwards to take lightly.

The defense begins with Zdeno Chara. Though the Boston Bruins big man is having a down season, the Olympics could be the event to spark his game. The offensive Lubomir Visnovsky of the Edmonton Oilers is a player who will welcome the opportunity to forget about the NHL for a few weeks, and the Slovakian team will need him for the power play. The rest of the defense is staffed by steady current or ex-NHL players, but could run into trouble against some of the more offensive teams in the tournament. If they can keep penalties to a minimum, and let Halak see the shots, it may not matter.

Why Tomas Plekanec will win:

The Czech forwards aren't as flashy as the Russians, Canadians, the Americans, Swedes, Slovaks or Finns, but they have a massive wild card in Jaromir Jagr. Whether Jagr turns out to be a revelation or an aging flop will figure heavily into how far the Czech Republic's offense will go. Plekanec will be elated to find the future hall of famer and Patrik Elias as his probable wingmates; they're a group that could cause no end of trouble for their opposition. Even if he's placed on the second line in favour of David Krejci, he'll be playing with sniper Martin Havlat, Tomas Fleichmann, Milan Michalek or Martin Erat. In short, the forwards are a mix of defensive responsibility and occasional offensive brilliance, which suits their system quite well.

Tomas Plekanec getting ready to give a nifty no-look pass. 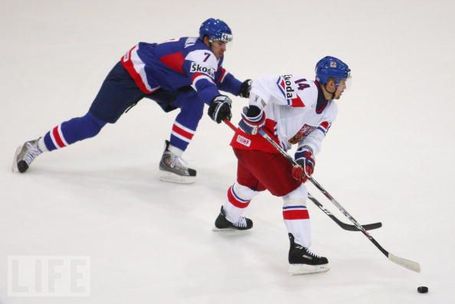 The Czechs do have something no one else in the pool has, and has perhaps been overlooked: a full defense corps of NHL players. They are notorious for being able to play hard-nosed, shut down hockey when the situation calls for it, and historically, have often played better than their individual parts would suggest. It seems doubtful that a change to a smaller ice surface would hamper them much.Tomas Vokoun (who's he again?) is the type of keeper than can steal a game or two, and behind that defense, looks tough to beat. Tomas Kaberle will be interesting to watch as their top scoring defenseman, particularly on the power play which looks lethal at a glance.

Fearless (insane) Forecast for Czech Republic-Slovakia: Plekanec scores the winner with less than two minutes to go in the 3rd after a Zdeno Chara giveaway. Halak gets his revenge against Russia in a 6-4 shootout. Plekanec gets the last laugh though, as the Czechs defeat the Swedes 3-2, while Slovakia bows out to Canada in the quarterfinals. 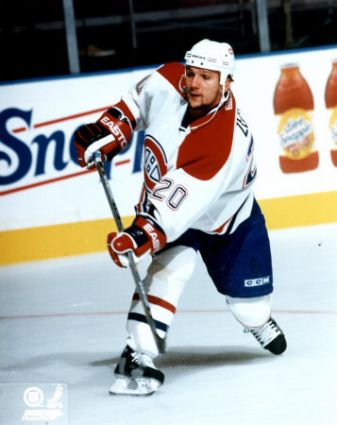 The Good and the Bad for the Habs:

Someone please tell Tomas Plekanec not to do any net crashing against Jaroslav Halak.

Other than that, the Olympics should serve both players well. Jaro's earned his chance to play in the tournament, and Slovakia GM Peter Bondra deserves props for noticing. In the worst-case scenario, Budaj replaces him and Halak has some time to get himself together before the stretch run begins. The only major concern for him is fatigue, as he has not had to carry the burden of a full season of hockey as of yet. But with Price resting up, our goaltending seems to be in promising hands for the next few months.

As for Plekanec, the Olympics offer him the chance to step up into a number one role against some of the best teams assembled worldwide. Pleks has the potential to become an elite NHL playmaker, and playing with the likes of Elias, Havlat and Jagr will only improve his confidence. He has had a good showing in the past playing for the Czechs internationally, winning Gold at the World Junior Championships in 2001, and Silver at the World Championships in 2006. A strong Olympics could lead to great things when he reunites with Andrei and Sergei Kostitsyn, Gionta, Gomez and (hopefully sooner than later) Cammalleri. The talk of him being resigned soon is encouraging; hopefully Gauthier can do so before he makes an even stronger, and more expensive, case for himself.

Roman Hamrlik was upset to learn that he would not be joining the Czech Republic team in Vancouver. 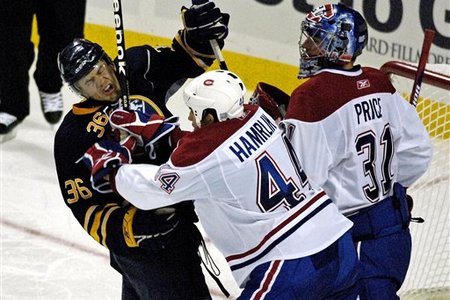 via cdn0.sbnation.com (Die by the Blade)

Jaroslav Spacek, on the other hand, has no regrets about staying home for the Olympics. 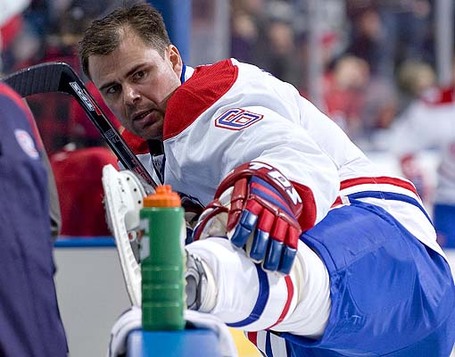