A Final Assessment on the Gainey Regime

Share All sharing options for: A Final Assessment on the Gainey Regime 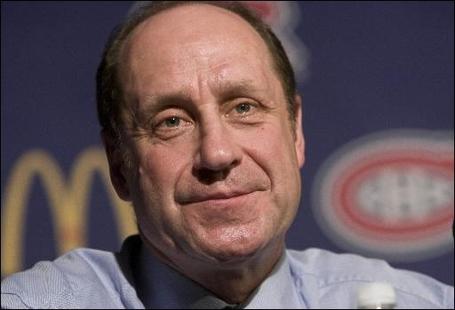 Opinions on Bob Gainey's effectiveness as Canadiens GM over a little more than six seasons are more diverse and fractured than any managerial tenure in Habs history.

It's aggreeable and conclusive that Frank Selke and Sam Pollock were masterminds. Irving Grundman's days as GM had both masterstrokes and bumbles, but he was deemed a failure working under long cast showdows. Serge Savard brought the team back up with a pair of Stanley Cups, thanks in no small part to Patrick Roy, who he drafted. Rejean Houle's era undid Savard's work with minute and precise incompatibility. Andre Savard was an improvement, in the midst of restoring respectability when Gainey arrived.

In June of 2003, the mere thought of Gainey as Habs GM spelled promise. There was a buzz in Habs fandom from the moment he arrived. A photo from an old cover shoot of Les Canadiens magazine that had him donning a white sleeve shirt, pulled open to reveal the "CH" in Superman costume style, became an image representative of that hope. Gainey did deliver, but the ultimate promise land remained elusive. That he suffered while leading, rarely spared him a poisoned dart. In the eyes of many, no Cups equals no merit, and that isn't always the most fairest of ways to assess. 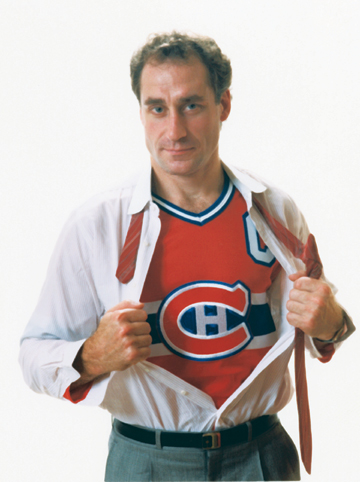 At this site, I write a great deal about Canadiens history. I should write a whole lot more about not being blinded - and rendered stupid - by the richness of it. In short, times and expectations have changed in a salary capped 30 team NHL. Yes, the ultimate goal of bagging Stanley does remain the same, but it is a more difficult and complicated achievement in this day and age. This site is named after the team's focus - having their eyes on the big prize - but it is the "getting there" that I hoped to document when I began filling pages.

If you have not seized this notion, don't bother reading on. In fact, delete this site from your favorites, because translating the patience required is not getting throught to you. Might as well watch Antichambre or 110% and revel in your incomprehension.

All tallied, Gainey run clubs swung the Habs winning percentage .048 points over that that time, a marked improvement over the previous regimes. In plainspeak, it works out to an average of seven more wins per season, or 14 standing points.

Team based statistics are but one surface assessment of Gainey's work , but player management is another misconstrued miscomprehension altogether. No stats here, I'll simply run off names in comparison.

Players drafted during the six season Gainey regime that played games with the Canadiens from 2003 to present are:

Between 2003 and 2007, twenty players chosen by the Canadiens in the NHL Entry Drafy have played at least 1 NHL game with the club. In those five seasons, the Canadiens drafted 42 players. With all variances understood, that is 48% of drafted players making their way to a big league game.

Players drafted between 1997 and 2002, prior to the Gainey regime that played games with the Canadiens are:

Between 1997 and 2002, seventeen players chosen by the Canadiens in the NHL Entry Drafy have played at least 1 NHL game with the club. In those six seasons, the Canadiens drafted 57 players. That is 30% of drafted players making their way to a big league game.

Of those 17 players, 8 are currently still on NHL team rosters. Markov and Plekanec are Canadiens at present, while the six others: Ribeiro (Stars), Beauchemin and Komisarek (Maple Leafs), Ryder (Bruins), Hainsey (Thrashers), and Higgins (Flames) are on teams that have thus far not won more games than the Canadiens.

From the 2003, 2004 and 2005 drafts alone, there are 11 players currently on NHL rosters. Seven of those (Andrei Kostitsyn, Maxim Lapierre, Ryan O' Byrne, Jaroslav Halak, Carey Price, Matt D' Agostini, Sergei Kostitsyn) are still with the Canadiens, while Kyle Chipchura (Ducks), Mikhail Grabovski (Leafs), Mark Sreit (Islanders), and Guillaume Latendresse (Wild), are on teams below the Canadiens in overall standing.

Taken all together, the Gainey era has provided the Canadiens team with 18% more draftees reaching the Habs lineup for at least one game, while the overall team record during those comparative seasons between 1997-2002 and 2003-2010 and drafts improved by a 0.48 winning percentage, or seven wins a season.

The most telling stat of all is that Gainey's teams have made the playoffs in four of five seasons, missing by a single win in 2006-07. In those post seasons, the Canadiens have won two rounds. Comparatively, the six previous seasons yielded only three playoff appearances with no round wins.

Fans following hockey often point to drastic improvement as a measure of assessment, but steady and progressive improvement over time has as much merit.

Going from playoff dreamers to post season regulars is but the first step. It's a step that can take time to achieve and maintain, but the Habs have essentially remained a playoff bound team annually during Gainey's tenure. That has been a big improvement for the Canadiens, from that of the 1997-2002 period. The next step, and that will be Pierre Gauthier's task, is to have the Canadiens consistently rank among the leagues top ten clubs and become perenial contenders.

It may take several seasons before the final assessment on Gainey's tenure with the Habs is properly filed and understood. The highs and lows have pretty much evened out over the course of six seasons, and the Canadiens have consistently been a top eight divisional club as opposed to being outside, looking in and up from the bottom seven.

Gainey may not have taken the Habs to the promised land, but he did deliver in bringing the club to the next level of standing and respectability. In years to come, the body of Gainey's work may appear more important than it does now.