Share All sharing options for: The Goods on Dominic Moore, Canadiens New Acquisition 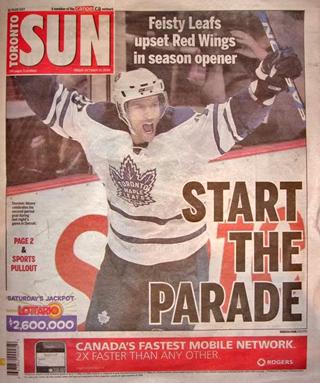 According to the team's official site, Canadiens GM Pierre Gauthier has just pulled the trigger on his first trade with Montreal, acquiring center Dominic Moore from the Florida Panthers for a second round draft choice in 2011.

The 6 foot, 198 lb Moore has appeared in 48 games for Florida this season, notching a respectable 9 goals and eight assists. The Sarnia, Ontario native has previously played with Buffalo, Toronto, Minnesota, Pittsburgh and the New York Rangers posting 43-74-117 totals in 353 games

It may have been with the Rangers in 2005-06 that Moore, then a rookie, left his biggest impression on Canadiens fans, scoring his first three career goals against the Habs in two games, and adding an assist in the third in October 2005.

It hurriedly added to Moore's reputation as a Hab killer, as in his very first NHL game on November 1, 2003, he registered 3 assists against the same Canadiens in Montreal.

Moore currently earns $1.1M and is a UFA next season.

The trade and the callup of defenseman P.K. Subban from the Hamilton Bulldogs will sure ignite rumour in Montreal that Gauthier is working on something larger.

Here are Moore's statistics from Hockey Reference and bio from Legends of Hockey. 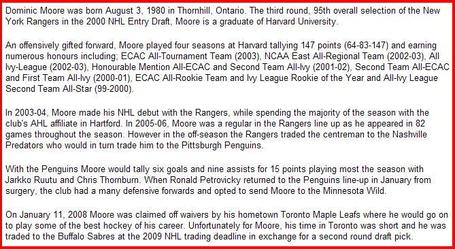