Gainey's Era: A look back

Share All sharing options for: Gainey's Era: A look back 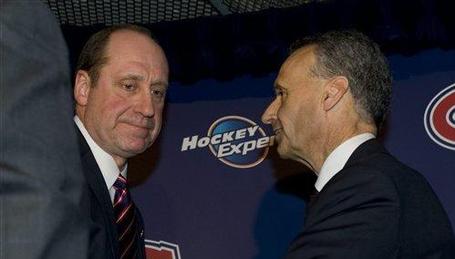 Bob Gainey’s reign as Montreal Canadiens’ general manager came to an abrupt end Monday afternoon, as he announced with a heavy heart that he was handing over his position to Pierre Gauthier, his assistant since 2006. Gainey’s seven-year stretch at the helm of one of the most prestigious organizations in pro sports history was marred by slightly more lows than highs, and it will be interesting to see what kind of legacy he leaves behind.

Fortunately we can speculate all we want until that time comes, which is exactly what I plan on doing.

Reflecting on Gainey’s tenure as GM can be seen in two different ways: either you appreciate the moderate success he was able to achieve (such as the 2007-08 season) and the fruitful acquisitions he made from time to time, or you lambaste his inability to bring a 25th Stanley Cup to a city full of die-hard fans.

The initial reaction from the hockey world following Gainey’s resignation is that choosing the first option would most likely make you a minority.

If people refer to the 2007-08 season as an argument for Gainey’s success in , it can easily be countered with the fact that it was ’s highest point total since he had taken over the team, and that although it was a great regular season it wasn't exactly the start or end of a series of 100-point seasons. With last year’s squad gaining entry into the playoffs through the backdoor and this year’s edition not likely to fare much better, that almost-mythical first place finish can now be seen as a fluke of sorts.

When a bevy of core players were ignored and unsigned on July 1st 2009, Gainey directed his attention towards new acquisitions, some more questionable than others. That brought him immediate flak from journalists and fans alike, as their stature (except for Hal Gill's) failed to convey the image of a brand new dynasty. Even though Mike Cammalleri and Brian Gionta have been consistent scorers since their arrival, players such as Scott Gomez (with bloated, long-term contracts) have been huge disappointments and will be Pierre Gauthier's problem to deal with this summer as he attempts to find enough cash to re-sign Thomas Plekanec to a long-term deal.

For those of you out there who prefer to remember Gainey in a negative way, there are more arguments for you to choose from. From a purely professional standpoint, Gainey’s job was to bring quality players to , people who could deliver a 25th Stanley Cup. Ultimately that never came close to happening as the team never went passed the second round of the playoffs under Gainey’s guidance. In his defense Montreal can be a hard place to play for certain players who aren’t used to this amount of pressure, but the numbers would indicate that they are paid astronomical amounts of money to do one thing very well, and that’s play hockey, regardless of the place. Unfortunately the Montreal Canadiens simply don’t intimidate visiting teams like they used to, and coming to the Bell Centre these days means playing against an average team, nothing more.

Perhaps the most unsettling caveat of Gainey’s reign is his inability to acquire premier players. While the rumor mill has been in full swing since 2003, whether in February or the summer, players such as Lecavalier, Hossa, Kovalchuk, Shanahan, Jokinen and Briere were all mentioned alongside various Habs players as potential deals but Gainey failed to provide his team with a power-forward it so desperately needs.

Last but not least, the development of young players has also been criticized as players like Matt D’Agostini and Max Pacioretty have failed to secure regular spots in the lineup. Moreover an interesting litter of draft choices throughout the years has failed to produce an above-average player, or rather someone who can win a game for his team single-handedly. Meanwhile many other teams in the league have a player like this. It just goes to show that Gainey’s 2003 promise of a "five-year rebuilding plan through the draft" did not work out as planned.

While the team still has a premier defenseman in Andrei Markov, ironically he remains one of two players that were not acquired by Gainey. Perhaps we all need to look at the state of the Maple Leafs to make us feel a little better, and to remind ourselves that we could have had worse than Bob Gainey as GM.