The Trade Deadline Arrives Early, Did Gainey Miss Out?

Share All sharing options for: The Trade Deadline Arrives Early, Did Gainey Miss Out? 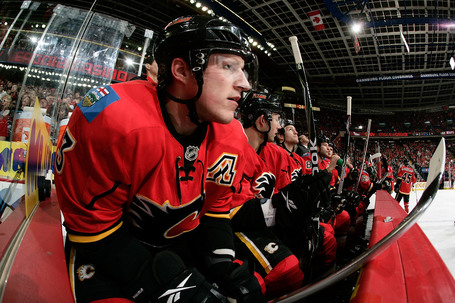 Darn, so how was your weekend?

Mine was a mixture of highways, freezing cold hockey rinks and winter hibernation surrealness.

My youngest was in a hockey tournament in Nepean from Friday to Sunday, so whipped, I didn't get a whole lot else done, or get to witness much NHL action.

As is custom with yours truly, the brewskies were pouring well into the Saturday late evening. When I awoke Sunday afternoon, I could have sworn I'd risen from a coma of some sort and stepped into March 3, 2010, trade deadline day in the NHL.

Long story shot, I crashed very late Saturday night / Sunday a.m., with NHL Network highlights on the tube. The lasting image of Jarome Iginla and Sheldon Souray trading haymakers worked its way into my dreams / nightmares, and I woke up with a suspicious feeling that Souray had been reacquired by the Habs!

I start checking the net and see that Brian Burke has been busy, to say the least, acquiring both J.S. Giguere and Dion Phaneuf.

I check the calendar and ask my wife and kids if this is not still January 31.

Three major deals in one day - and a Sunday to boot!

Like whoa! Remember the last Leafs / Flames multi-player deal in 1993?

Calgary, who are sitting in eighth place in the Western Conference, were not done. The offed the inceasingly unlikeable Olli Jokinen and rugged forward Brandom Prust to the New York Rangers for the disgruntled Ales Kotalik and former Hab Chris Higgins.

In all, there was an exodus of 9 players on Canadian soil moved to new teams. Frightening shit, coming out of self induced beer come, I might add.

As a Hab fan, none of this bothers me in the least.

Was there a player dealt that might have improved the Canadiens standing had he been acquired? I think not.

I loved Phaneuf once, shortly after his rookie season. I thought he was a franchise player real deal. But a friend of mine was soon privy to some off ice info about the guy that always remained on the brain. My buddy worked for Bell Teleperformance, a telecommunications company that served all of Canada, when he received a call from Phaneuf. In ordering a sports package, the former Flame, on a day game, was partying quite hardy. The call I was told, took over an hour to finalize, because Phaneuf, it sounded like, had an army at his home that day.

Watching Phaneuf's play and stature decline since then, I've never forgotten that tale from my friend, although I thought it pure bullshit at the time.

Now, my question would be, with all this player movement, and in light of the Cammalleri injury on Saturday night, what do you think.

Did Gainey miss out on something good?

Or was he just wise to watch the parade pass by?