The fans reached their Summit, when will the Habs?

Share All sharing options for: The fans reached their Summit, when will the Habs?

Sunday was a travel and recuperation day for yours truly, after a great weekend in Montreal, so I'm a little behind to start the week.

First up a shout out to all those who attended the fourth annual HabsInsideOut Summit this past weekend.

It was good to see some old friends, and make some new acquaintances Friday and Saturday. According to organiser Ian Cobb, 87 members attended an extra shout out to Peter, who made the haul all the way  from the Yukon.

Not everybody was able to make the entire event's itinerary, but even running into familiar faces at some point over the two days was well worth it. A charity raffle raised close to $1200 for the Gainey Foundation. 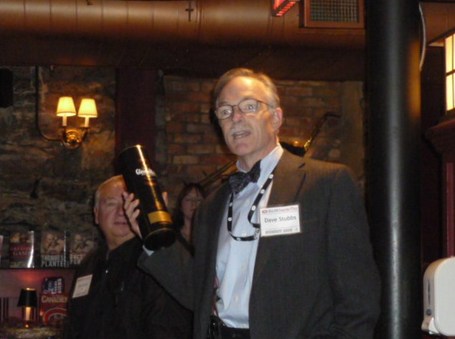 The Montreal Gazette's Dave Stubbs stopped in to thank the crowd, and drop off some prize donations. One item was an 18-year-old bottle of scotch given to him by the family of the late Gerry McNeil. A hockey card and copies of articles Stubbs wrote on the former Canadiens goalie, were also included.

One "lucky" raffle winner, who readers of EOTP know very well, walked off with Stubbs' "booby prize", a book entitled "Toronto Maple Leafs: Diary of a Dynasty 1957-67." Here's hoping the winner comes out of his semi retirement, to give us a review of the book down the road. I mean c'mon the Habs won 7 Stanley Cups in that stretch!

The party wrapped up Saturday night with a post-game sorrow drowning at Hurley's Irish Pub. There the clan mingled with some notables in the Habs media world that included Mike Boone, Pat Hickey, Rick Moffat and Arpon Basu amongst others.

The downside of the weekend, of course, was the game itself on Saturday between the Montreal Canadiens and the Ottawa Senators.

Does anyone else remember Jacques Martin last season, talking about how the team needed to find it's identity, and chemistry. Well one season later, Martin is making line combinations as if he throws some hockey cards on the table and randomly picks his forwards.

At one point, the Habs bench boss had Maxim Lapierre out with Andrei Kostitsyn and Scott Gomez. Based on Monday's practice, that trio will likely be together, at the start anyways, Tuesday against the Vancouver Canucks.

I know the team is having problems scoring, but was it wise to separate what was his best line of Tomas Plekanec, Mike Cammalleri and Kostitsyn? Pat Hickey said to me Saturday that they have to do something to wake up Gomez and captain Brian Gionta. Gionta at least bagged one, and Gomez did show some moments but maybe set the tone in the warm-up, when his first shot missed the empty net.

While Plekanec had some great opportunities with whoever he played with, the pair that were his wingers though a successful October struggled, especially Cammalleri. So now instead of one misfiring line, the Canadiens have two.

Martin's most consistent trio has been the newly anointed "PhD line" of Benoit Pouliot, Jeff Halpern and Mathieu Darche, who did pretty much everything they were required to, and had some scoring chances of their own along the way. With martin gambling on everything else, would it not have been worth the gamble to try them with the goalie pulled and maybe send a message to the financial earners on the roster?

Martin's use of his defensive pairings was also a question mark. Hal Gill and P.K. Subban? Really? That didn't work, and it became evident as the group I was sitting with noticed we hadn't seen No. 76 for the latter half of the second period. Andrei Markov still isn't up to form and nobody understood why he stayed out for the entire final 1:30 plus, especially when he couldn't contain the puck during an offensive zone faceoff.

Carey Price continues to play at a consistent level, enough to earn the game's second Star, even coming out for the curtain call. The score could have been far worse if not for his play in the second period.

Martin used the excuse that the Canadiens were tired, and Ottawa was well rested and played an aggressive road game. Well if one of the summit members managed to attend Friday's game against the Buffalo Sabres on the road, then drive two hours home, get minimal sleep, and drive another 5 hours to attend the Summit, I'm sure the Habs could have made a more equal effort on the ice.

Boyd waived: An interesting move that sparked all kinds of opinions in Montreal , but nothing uncommon in the cap-era NHL, to see Dustin Boyd placed on waivers today. Did he get a chance to play with Gomez/Gionta?  Everyone else did, maybe that's what he needs. La Presse's Marc-Antoine Godin tweeted today that he also expects Ryan O'Byrne's situation to be resolved as well. O'Byrne hasn't seen action on the Habs blueline in ages, but amazingly has been almost as effective as Jaroslav Spacek.

I always thought Steve Rogers (not the Montreal Expos pitcher) was Captain America: The AP profiles the Habs captain

Looking at the Habs prospects: Robert Rice, known as SeriousFan09 and maybe the tallest HIO member, looks at the ones down the pipe.

More on the PhD line

Beer me! But not at the Bell Centre: Seems strange that a cold one at the Bell Centre ranks the most expensive in the NHL, yet a 2-4 is cheaper in Quebec than in Ontario. By the way, that curved stick in the beer commercial linked in the article is residing at the Hockey Hall of Fame's archive. I had a chance to see it a few days ago during the SIHR fall meeting, when the "Keeper of the Cup" Phil Pritchard gave us a tour of the facility. 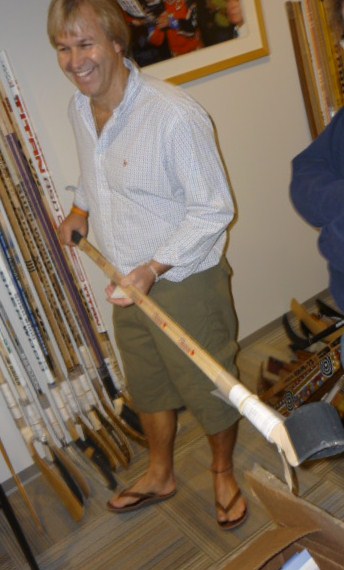 Looking ahead: Pat Hickey on the two big challenges on this week's schedule.