Gomez and Gionta: The Math is on their side

Share All sharing options for: Gomez and Gionta: The Math is on their side 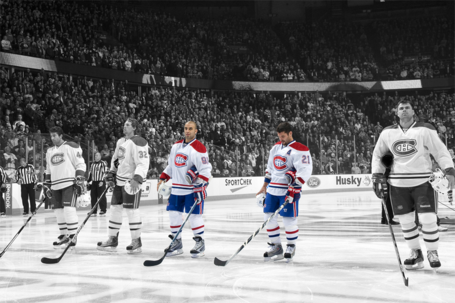 As always, when the Canadiens are winning there is very little complaining, but once the losses begin to mount the mob mentality takes over and the search for answers begin. For now the usual scapegoat, Carey Price has been replaced with the struggling duo of Scott Gomez and Brian Gionta.

As everybody jumps on the $13M combo, I noticed one individual refusing to pile on. Over at the H Does Not Stand For Habs there was an interesting rant by EOTP regular MathMan in regards to the dynamic duo. J.T had implied that Gomez was not being demoted because of his salary and Math Man took her to task with the following:

I have had it to up here with this nonsense about how Gomez and Gionta are playing poorly and aren't giving the team what they want. This entire situation is a massive, massive argument for microstats and just plain scoring chances and not focussing so much on plain offensive production.

Gionta and Gomez are both playing perfectly fine. They're outchancing their opposition. Gomez is setting up Gionta very well and Gionta is racking up four shots a game and a stupid number of scoring chances....

The rest of the rant can be read here.

The majority of the hockey world has not caught on to the new statistics that are changing the way we view the game. From intense breakdowns by Gabriel Desjardins at behindthenet hockey and the dedicated over at the Copper and Blue, their work was influential to my Price/Halak pieces from last season.

With the new Wiki based world in which the internet has made every statistic accessible and mass collaboration easier than ever, basing opinions in the manner that the traditional media has since the invention of the Gutenberg press can force you into uncomfortable mea culpa's.

The reason that Gomez hasn't been demoted is not a reflection of his salary, it would be sending the wrong message to a player who is continually doing his job and is struggling statistically because his long-time trigger man is snake bitten.

If words like Corsi, Fenwick and offensive zone starts make you nervous, relax, because you will likely become more familiar with them over the next year. I will be playing with these microstats throughout this season and it looks like Apron Basu has begun his crash course recently.

Mathman brings up microstats in his rant and Gomez and Gionta rate fairly highly in Corsi and Fenwick numbers.

The basic figure used in coming up with a Corsi rating is shots at net, which means shots that actually reach the goalie or go in, plus the ones that are blocked or miss the net. Corsi devised it to understand how much work a goalie was getting because every shot attempt requires some sort of a reaction by the goalie, even if he doesn't need to save it. But it is actually a far better indicator of how often a skater is in an attacking position on the ice.

Fenwick is Corsi minus the blocked shots. Both are only charted at even strength to remove any advantage gained from extra power play time.  Below I have charted all the even strength shots, goals and misses registered by Gionta and Gomez playing together with their revolving linemate through 12 games. I used the Fenwick number because NHL.com does not offer up shot distance for blocked shots and I did not want to watch every game to record each event. 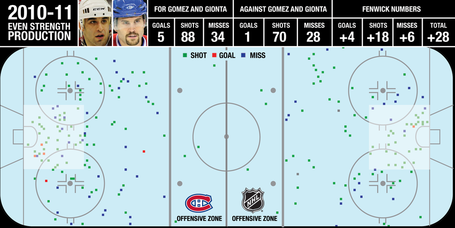 Like Basu mentions, Gomez has been a Corsi stud for years, not because of his prolific shot production, but because he has the ability to create scoring opportunities for his linemates. Through 12 games, the Gomez/Gionta combo has produced 127 shot events and only surrendered 99. They have only been scored on ONCE at even strength through 12 games. It is easy to over simplify a players contribution by looking at points alone, but you cannot appreciate the skills of Gomez and Gionta without assessing their education at NJDU (this should be Montreal Canadiens U, but somwhere in the mid-90s the New Jersey Devils perpetrated a massive identity theft. I am looking at you Jacques Lemaire!).

These guys spent close to a decade choking off the neutral zone and are usually in the proper support position when back checking or offering up primary and secondary options for transition.

Corsi and Fenwick are good possesion stats, but they do not register quality of shot/miss/blocks. This is where their production becomes even more understated. 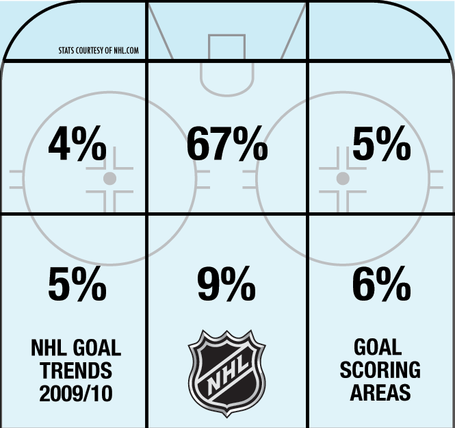 Looking at the goal trends from the 2010 season, it reinforces the arguments I made in regards to Halak and Price. Shots in the slot result in close to 70% of all goals scored last season and although shots are not weighted in the Corsi/Fenwick system, it is obvious that they represent greater value than a shot from 80 feet even though both systems view them as equal. The center of the ice accounts for almost 80% of all goals scored last season.

Viewing the first chart, it shows the Gionta/Gomez line with a 43-33 shot creation advantage from the slot and a 61-46 advantage from the center where 80% of all goals are scored. That is a significant advantage through 12 games and it has been accrued while playing with Travis Moen and Mathieu Darche for 10 of the 12 games.

Everything they are doing runs counterintuitive to the expected result.

This brings me to the likely cause of all of this strife, Brian Gionta and his shooting percentage. 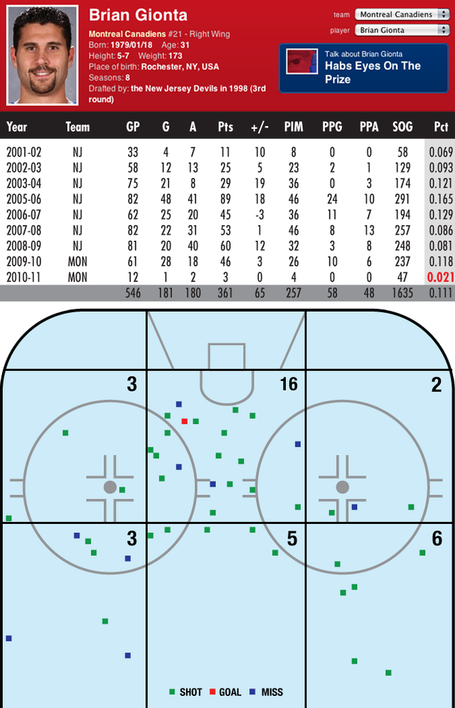 Gionta owns a career 11% accuracy and if he had performed at his career mark he would have 5 goals through 12 games, essentially a 40 goal pace. Even if you place him at 8%, his worst percentage since his rookie season he would be at 4 goals and 2 assists through 12 games. Not fantastic, but not garnering as much attention as he is right now. With Gomez's production tied to Gionta's, his numbers would likely be respectable as well.

The optics of the situation look terrible because he has decided to slump at the start of the season. If through 40 games he had 30 points and he went through this 12 game funk, he would be sitting at 33 points through 52 games. Probably not something the fanbase would meltdown over.

In order to be concerned, we would have to operate under the fear that his career is in massive decline. Looking at  the company he is keeping in the shot category, that is not realistic. His production is up there with the likes of Alex Ovechkin, Jeff Carter, Sidney Crosby, Evgeni Malkin, Zach Parise, Rick Nash and Eric Staal. He is on pace for a career best 321 shots. If he continues to produce quality shots (see above), the averages will even out and he will likely enjoy a 10-12 game stretch where he pulls a Matt D'Agostini and scores 5 goals on 16 shots, bringing his shooting percentage to normal levels.

I had these exact same concerns on the opposite end in the playoffs when Mike Cammalleri, Gionta and Tomas Plekanec were carrying shooting percentages that they could not possibly maintain.

Another major factor in the duo's lack of production is the Canadiens putrid powerplay. 30% of Gionta and Gomez's career production is linked to the powerplay. During Gionta's career season he had 34 powerplay points, Gomez had 33. if you remove 30% production on a 60 point year, you are down to a 42 point player. When you factor in the absence of Andrei Markov and the impact he has had on the perennially top 5 ranked powerplay, you may have another smoking gun in their perceived sluggish start.

Is Gionta in the process of producing the worst shooting percentage of his career? Is the vaunted Canadiens powerplay going to sputter along at 7% when it has averaged 21% since the lockout and clicked at a 22% rate in 2010 with the exact same coaching staff and personnel?

Not exactly indicative of the season he had was it?

Players not named Ovechkin and Crosby ebb and flow all season.

Using the advanced metrics to breakdown Gionta and Gomez allows a drastically different perspective than traditional stats would indicate. Gionta and Gomez are consistently limiting their opponents chances (1 even strength goal against all season!), they are creating even strength opportunities in the highest scoring zones on the ice, they are drawing penalties at a greater rate than 90% of the team and are generating copious amounts of offensive chances even though the majority of their zone starts are outside the offensive zone.

These are not the traits of players being favoured because of money or are ones in need of a demotion. The lazy narratives about the pressure of the captaincy weighing him down are unquantifiable outside of him admitting such. These are veteran leaders in their prime who have likely suffered from poor puck luck to start the season.

Jaques Martin should continue to roll them out there and has every right to have confidence that they will turn things around. Eventually they will hit a hot streak and Cammalleri, Plekanec and Kostistyn will drop from the lofty levels that saw them shoot the lights out early in the season.

Keep shooting Brian, the law of averages are on your side. 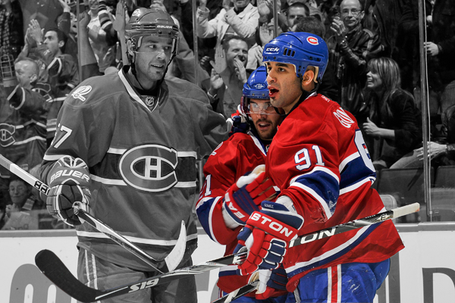 Below are some of Gionta/Gomez's numerous chances. Unfortunately NHL GameCenter does not provide access to all the shots, so I can only provide 7 chances that did not result in goals. There are plenty more (Olivier from the blog Waiting for the Nordiques regularly tracks scoring chances and he places Gionta at 33 scoring chances this season) that are contained within the GameCenter archives that I am unable to link to.