The Montreal Canadiens had started off the 1955-56 season where they had left off, prior to the infamous suspension of Maurice "Rocket" Richard and the ensuing rioting that followed.

By the end of October, and one game into November, the Canadiens were 6-3-3, and leading the league.

Meanwhile, one of the team’s top scorers the previous season, Jean Beliveau, was not off to a great start. Despite 3 goals and 11 assists through the first dozen games, Beliveau was not up to his personal standards.

"I don’t think I was ever so discouraged as I was at the start of the 1955-56 season," Beliveau recalled in the book Fire Wagon Hockey. "I must have hit fifteen goal posts before Toe Blake told me to start shooting at the net, rather than at a particular spot, until I broke my slump. Sure enough, a couple did, and I did all right."

By the time Beliveau and the Canadiens were finished a two-game weekend series against the Boston Bruins on November 5-6, "all right" was an understatement.

The Saturday game not only set the pace for a season that would not only see Beliveau win both the Art Ross and Hart Trophies, and of course see the Canadiens win an unprecedented five-straight Stanley Cups, but also make a significant contribution to a change to the NHL rulebook.

Before a packed Forum, the Canadiens found themselves down 2-0 to the Bruins and netminder Terry Sawchuk, on goals by Leo Boivin and Doug Mohns.

What happened next was something you won’t see anymore. With the Bruins Cal Gardner serving a penalty late in the first period, Hal Laycoe joined him in the sin bin 16 seconds into the second.

The Canadiens power play unit, that had Doug Harvey, Tom Johnson (Bernie Geoffrion also played point often) on the blueline and Bert Olmstead, Richard and Beliveau up front, then took over. Now keep in mind that up to this point a player served his full two minutes, regardless if the opponent scored.

0:42 An Olmstead pass from the corner is redirected by Beliveau and past Sawchuk.

1:08 Another similar pass from Olmstead pass finds the stick of Le Gros Bill

1:26 A third power play goal for Beliveau in just 44 seconds.

Olmstead assisted on all three goals, with Harvey having a pair of helpers and Richard one.

With the Canadiens in the lead, the Forum fans littered the ice. Many at that moment thought that Beliveau had set a record for fastest three goals, but Bill Mosienko’s 22-second tear in 1952 was still the standard.

Up to that moment it was the greatest feeling for Beliveau as a player, having yet to taste from Lord Stanley's Mug, as noted in this La Presse article from November 7,1955 dug up by Francis Bouchard. 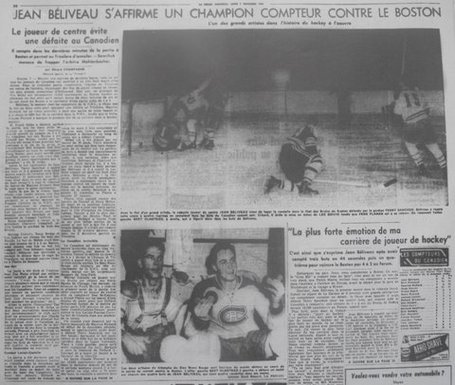 Bruins coach Milt Schmidt was irate with referee Jerry Olinski for allowing the Canadiens to have a two-man advantage, and the players began throwing things off the bench. The end result was a 10-minute misconduct against the Bruins’ Bob Armstrong.

In fairness, the Bruins also had a 5-on-3 opportunity later in the game, but were thwarted by the Canadiens defense and goaltender Jacques Plante, who was about to begin his era of dominance in the Montreal net.

Olmstead set up Beliveau for a fourth goal, in the third period, for a 4-2 final score. 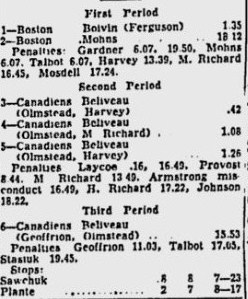 The next day, Beliveau scored his fifth goal in two games, in a 3-3 tie against the same Bruins, and now led the league in scoring with 19 points. Olmstead, who walked away from the weekend with 5 assists, found himself in second place with 18. 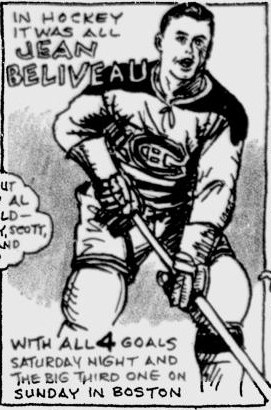 As the Canadiens and Beliveau rolled on through the 1955-56 season, the power play, that also featured Henri Richard and Dickie Moore among others, became unstoppable and multi-goal power plays were common place.

A detailed list of "extra goal" power plays that season is listed below in an article from hockeyprospectus.com

In total, it worked out to eight extra goals on the power play for the Canadiens, whereas the opposition only accomplished the feat once against them.

By January of 1956, league President Clarence Campbell wanted to see the penalty rule revised so that a penalized player could return to the ice once a power play goal was scored.

Canadiens GM Frank Selke learned of Campbell's desires, a few months later, in conversation with the Patrick brothers (Lynn and Muzz) who ran the Bruins and New York Rangers respectively.

"In all the year's of Detroit's dominance, and their almighty power play, there was no suggestion of such a change," Selke said in response. "Now the Canadiens have finally built one, and you want to introduce a rule to weaken it? Go get a power play of your own!"

When the time the NHL’s annual meeting was completed in June of 1956, the league’s governors outvoted Selke 5-1 in favor of Campbell’s request on rule 26(c), which became known as "The Canadiens Rule"."

26(c) If while a Team is "short-handed" by one or more minor or bench minor penalties, the opposing Team scores a goal, the first of such penalties shall automatically terminate.

Despite the rule in place, and a smaller gap between them and the rest of the league, the Canadiens still led the NHL on the power play the following season.

Denault, Todd; Jacques Plante: The Man who Changed the Face of Hockey