A home side look at the Atlanta Thrashers

Share All sharing options for: A home side look at the Atlanta Thrashers

We had some good response from some journalists on the grading of the Montreal Canadiens, at the 20-game mark, so I decided to take the survey outside the box.

With the Canadiens paying a visit to the Atlanta Thrashers, I fielded the same set of questions to Chris Vivlamore, the Thrashers beat writer for the Atlanta Journal Constitution.

The Thrashers are on a three-game win streak, to open the second quarter of the season, outscoring their opponents 12-2. The streak has pushed Atlanta back up above the .500 mark (10-9-3), going into Friday's game.

Since the franchise began in 1999, the Thrashers have only made the playoffs once (2006-07), but were swept in four games in the first round.

The team has also struggled to keep some top-name players in their flock over the years. Dany Heatley, Marian Hossa, Ilya Kovalchuk, and Marc Savard have all worn the Midnight Blue and/or Georgia Bronze at some point in there careers.

With a new GM (Rick Dudley), head coach (Craig Ramsey), and some new faces on the roster for 2010-11, the Thrashers are hoping to get back into the playoffs and a chance at Lord Stanley's mug.

Are they capable of doing that? Mr. Vivlamore gives us his grades on the team, and where it needs improvement. 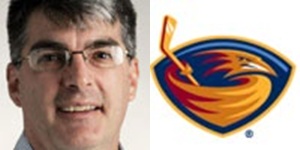 Chris Vivlamore's Thrashers Grading (on a scale of 1 to 10)

7/10: "The Thrashers allow too many shots on goal and are near the bottom of the league in goals allowed. Turnovers and poor positioning have led to costly goals."

8/10 : "Ondrej Pavelec, after his early season scare, has been outstanding lately. He is third in the NHL in GAA and save percentage. Chris Mason, who was pulled in each of his last two starts, carried the early load but has a 3.90 GAA and .897 save percentage."

9/10: "Easily the biggest difference in the Thrashers this season, including offseason acquisitions of Ladd, Byfuglien, Ben Eager and Brent Sopel, has been coach Craig Ramsay and his staff. That includes associate coach John Torchetti. They are task masters and have drilled the details into the team and it’s starting to pay dividends."

Where do you see the Thrashers over their next 20 games? They seem off to a good start with Wednesday's win over Detroit.

"Over the next 20 games I see the Thrashers about where they are – fighting anywhere between the sixth and ninth spots in the Eastern Conference.

"If they can continue playing top teams tough (they are 2-1-1 against Capitals), they can hang around."

Are the Thrashers a legit playoff Contender, Yes/No/Too early to tell?

"I think the Thrashers are a legit playoff contender.

"They finished five points out of the playoffs last season and made significant improvements this season both to the coaching staff and roster. They will have to be more consistent than they have through the first quarter of the season.

"They have proven they can play with the best in the league by outscoring Washington and Detroit 10-1 in two of their three straight wins.

"I think there is a good chance they will be in the playoff race until the end, battling teams like the Ottawa Senators and the New York Rangers."

I would like to thank Mr. Vivlamore for taking time for us, on his Thanksgiving Thursday, to give us his evaluations and answer our questions.

You can follow him via Twitter, and also the Atlanta Journal-Constitution's Thrashers Daily Report, as well as their team page.