Ontario artist captures the Legends of Hockey on canvas

Share All sharing options for: Ontario artist captures the Legends of Hockey on canvas

Neustadt, Ontario is a quaint little town about two hours northwest of Toronto.

The town was not on my bucket list of places to visit, but last week it was well worth the trip that evolved from some random online research into a hidden discovery.

The small town is the home to the River Song Gallery. The gallery's resident artist is Gary McLaughlin, a 32-year veteran of oil and canvas, who's clients have included hockey notables such as Bobby and Brett Hull and Harold Ballard, as well as corporate clients such as Tim Horton's (winter mug collections) and Coca Cola.

Since 2006, McLaughlin has been passionate in capturing the world of sports, and he has done a phenomenal job of it.

One of McLaughlin's largest ventures into hockey art is a mammoth piece named, "Blue Sky - White Snow." The six by 12 foot canvas encapsulates every single player to ever play for the Toronto Maple Leafs from 1927 to 2007.

The canvas was not at the gallery, during my visit, but up the road in Hanover, where the NHL Alumni were hosting a game. Several former Leafs such as Mark Laforest and Rick Vaive (seen in the photo with McLaughlin), were on hand to admire the painting that highlights 765 players from the one-game players to the Hall of Famers. 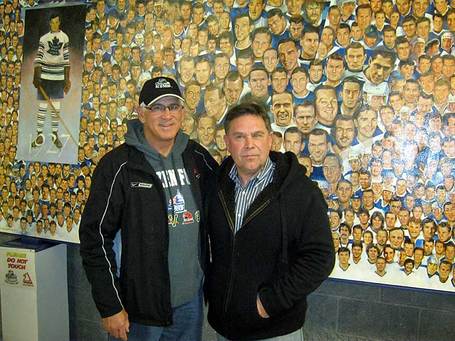 McLaughlin's work is highly detailed and well researched. He is a member of SIHR (Society for International Hockey Research), and takes his subjects from photographic reference. From a simple sketch on the canvas, the brushstrokes then  fill in the amazing detail.

He has also captured individual players on 30" x 40." His subjects include the three of the greatest players in Montreal Canadiens history, Chicago Blackhawks legend Stan Mikita, current stars Sidney Crosby, Jarome Iginla and Alex Ovechkin, as well as legends from other sports. 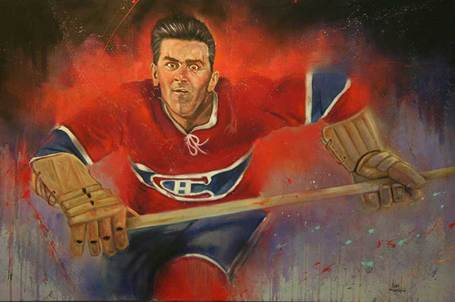 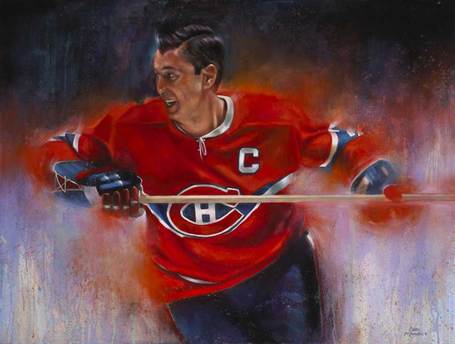 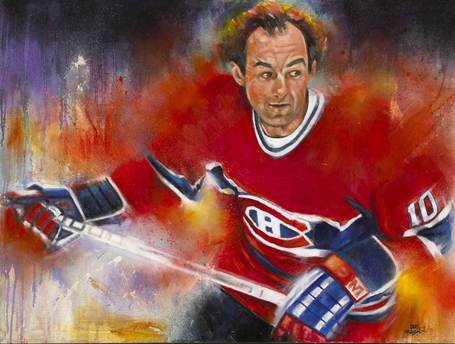 The latest project for the artist is just in the final stages of completion. McLaughlin has researched every single player in the Hockey Hall of Fame that played on the Original Six teams, and put them on his canvas.

This project was put on 40" x 56" canvas and took almost a full year from conception to completion. The Boston Bruins painting was the last to be finished and a quick look at the artistic process can be found here. 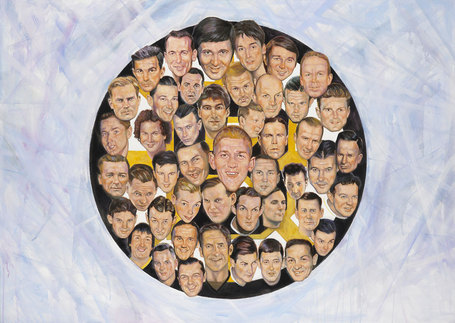 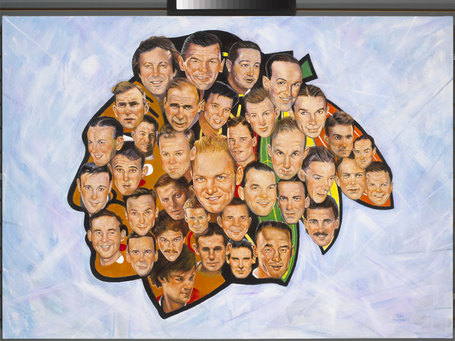 It was certainly not an easy task, as several players played on two or more of the Original Six teams. Even Doug Harvey, who played just two games for the Detroit Red Wings, appears on that painting.

McLaughlin was careful not to miss anyone, but left a few spots open in the event he did. He panicked when I noted I didn't spot Ted Lindsay on the Blackhawks painting, but a quick check of the "cheat sheet" sketch enabled us to find him.

"When Dino Ciccarelli was added (inducted in 2010), we realized he played for Detroit and squeezed him on the end," he said.

One of the daunting tasks for McLaughlin was capturing the multi-team players in a portrait depicting the years they played on that particular team. He noted the how he had to show the players as they aged from one team to another. Phil Esposito (Chicago, Boston, NY) and Jacques Plante (Montreal, NY, Toronto, Boston) are examples of this.

With some only playing for a handful of games, it wasn't easy, but his research paid off. 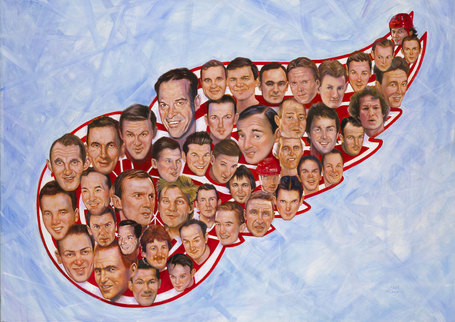 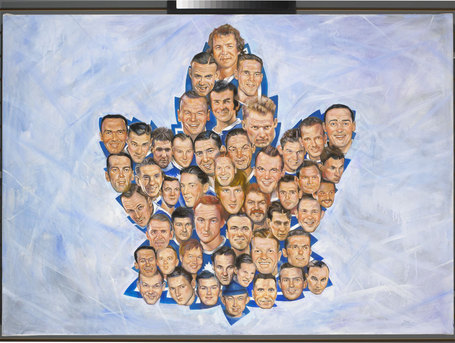 It also became a learning experience for him, as along the way he discovered where players started or finished their careers before or after their peaks of greatness.

"I didn't know (Tony) Esposito played for Montreal," he said, noting the legendary netminder whose career rose in Chicago after his short debut with the Canadiens.

McLaughlin's work has already received the attention of the Hockey Hall of Fame., who have asked to take the New York Rangers print down to New York City as part of the team's 85th anniversary. 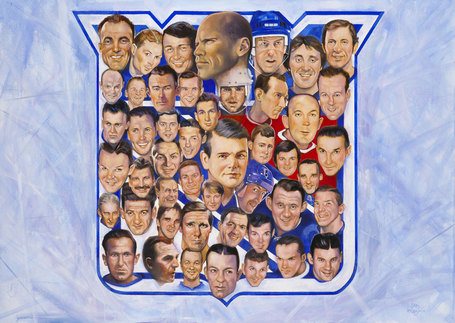 Ideally the artist and business partner Stephen Corras would like to see all six of these paintings under one roof, but realize the opportunities are endless. They have already sent off a print to the Blackhawks in hopes of getting some response to get interest in either a purchase or possible deal to license lithographs or prints of the work.

In the meantime. McLaughlin's creative mind is already thinking ahead to his next project which could involve the pioneer players of the NHA and NHL. He already has a painting of Fred "Cyclone" Taylor completed.

Those who may be interested in Mr. McLaughlin's work can contact either him or Mr. Corras at Blue Sky Sports Art, but to truly appreciate the work, it is best to see it in person if you can.

Riversong Gallery is located at 536 Mill Street in Neustadt, ON.