Enhancing the Fan Experience: At the rink itself and beyond

Share All sharing options for: Enhancing the Fan Experience: At the rink itself and beyond

There is no argument that being at the home rink of your Montreal Canadiens IS the true fan experience.

Whether it's you and a friend, or a group or maybe you lucked in on a single ticket last minute, nothing compares to being in the Bell Centre to watch the Habs.

From the pre-game warmup to the end of the game, the energy in Montreal cannot be compared to anywhere else in the NHL.

Now I know that some other fans will disagree, citing favoritism but I've been to Toronto countless times, as well as Nashville, Tampa and Ottawa amongst others, and there is no comparison.

But the game alone is just part of the experience in Montreal, and for first timers you may want to set the whole day aside.

With the Canadiens 100-year history, there is a lot to be shared and the Habs have full out done that. While banners and large photos drape the Bell Centre, the true welcome mat is the Centennial Plaza.

There a cobblestone like display of bricks inscripted with fans comments and messages surround larger stones highlighting significant moments in the clubs history. Along the east side are markers for each of the retired numbers in bleu-blanc et rouge. Centered in the middle is a monument noting the team's Stanley Cup years, as well as the names of each and every player to wear the Canadiens sweater from 1909-2009,

The true highlight of the plaza is the four bronze sculptures of the greatest players in Habs history; Howie Morenz, Rocket Richard, Jean Beliveau and Guy Lafleur. These extremely detailed and lifelike pieces were the work of Quebec artist Marc-Andre J. Fortier, whom I had the pleasure of interviewing in 2009 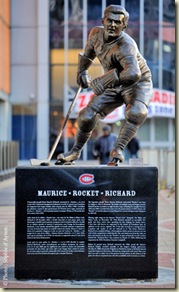 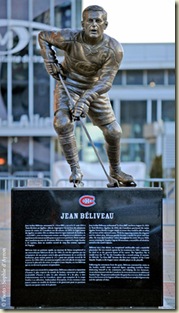 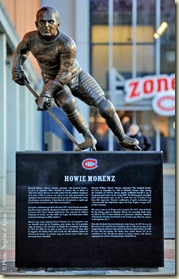 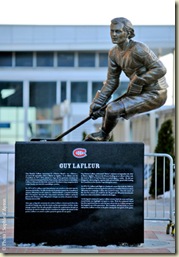 I just ask, after witnessing this from my last visit, that you don't climb up on them. Not only for your own safety, but for the fact that Mr. Fortier put nearly eight full months 24/7 into them. NOT FOR SITTING/STANDING folks!

The latest feature is the new Canadiens Hall of Fame, located at the east end of the Bell Centre. For $8 ($5 if you have a game ticket) you can tour and see several artifacts from the Habs 100 year history. From hockey cards to game used equipment and Stanley Cup rings, it is well worth the time to check out. You may even want to go around a second time...I did! 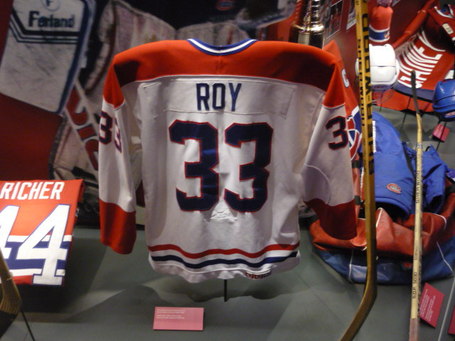 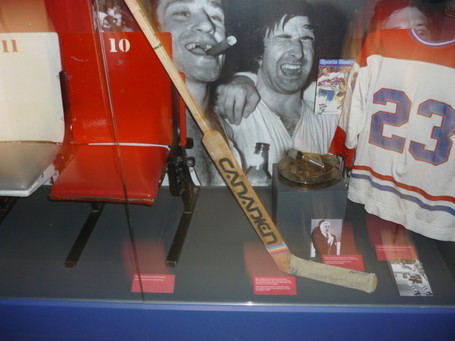 A tour of the Bell Centre is also a must. Unfortunately you cannot visit the dressing room during the season, but you get a chance to see some behind the scenes areas, including the alumni lounge and the press ring and coaches press room.

On game day, you can catch the Habs at the morning skate if you get the early tour. Cameras are not permitted to photograph the players near ice level, but you can take snapshots from the press ring if you have a good lense.

While up top you can take in the 24 Stanley Cup banners and the retired jersey banners up close. Look back over your shoulder and you will see the "Ghosts of the Forum" staring at you from the Canadiens Ring of Honor.

The game itself, of course is what you are there for. It's certainly not like it was 30 years ago when there was nothing to enjoy while waiting between the warm-up and the start of the game. The Bell Centre's massive score clock has a complete HD video display, the biggest of it's kind in the NHL.

Fans can enjoy assorted video segments, such as "Ask a Hab", stats and various other messages or advertisements. The marvel comic-like player intro is a nice touch. 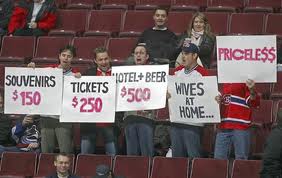 Then it begins, the lights go down the flag bearers come out and PA announcer Michel LaCroix says, "Madames et Monsieurs, Accueillons nos Canadiens!" followed by the starting lineups. It gives me chills every time.

Watching the game is easily enhanced by information on the scoreboard, as well as live play on the screen as well, which can be handy sitting at the far end while the play is at the other.

Many fans still have portable radios with ear buds to listen to the game's play by play, but for me the crowd reactions and commentary are far more enjoyable at a a live game. The scenery can be pretty good too. 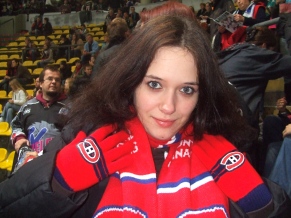 Cell phone and smartphone diehards will still be texting from the game or posting to sites hopefully such as ours or HabsInsideOut. It's also handy on you Samsung  or other model smartphone if you want to check stats, or depending on your service, watch replays in case you missed a big play on a trip to the restroom.

The game goes on, fans leap out of their seats, scream at the refs, and ponder to each other, "why did they do this and not that?"

Group outings or "tweetups" can also be part of the fun, either in Montreal or out of town at a Habs-friendly locale.

The HIO gang's annual summit incorporates most of the above mentioned events and a pre-game dinner/or post game get together at any nearby watering hole is also a great idea, even if you don't have a game ticket. Depending on where you are during or after a game, who never know who might walk in to the nearby watering hole, be it a media personality or former player.

A game in Montreal, win or lose, is second to none. If you've never done it, what are you waiting for, besides the fact that tickets are like gold and in some cases just as expensive? Just make sure you do it at least once.

The Old Barn: It may not look like it used to, but the Montreal Forum, now the Pepsi Forum, is still at the corner of Atwater and Ste. Catharine. A few items remain, including a few rows of seats and a cobblestone Habs logo on the sidewalk, but it's still worth a visit for any Habs fan.

On the Road: The Canadiens fan base is massive worldwide, so there are always lots of fans in the road barn. In some cases, such as Ottawa, and recently Long Island, the Habs faithful can outnumber the local team.

Watching the Game at home

No TV? No problem!